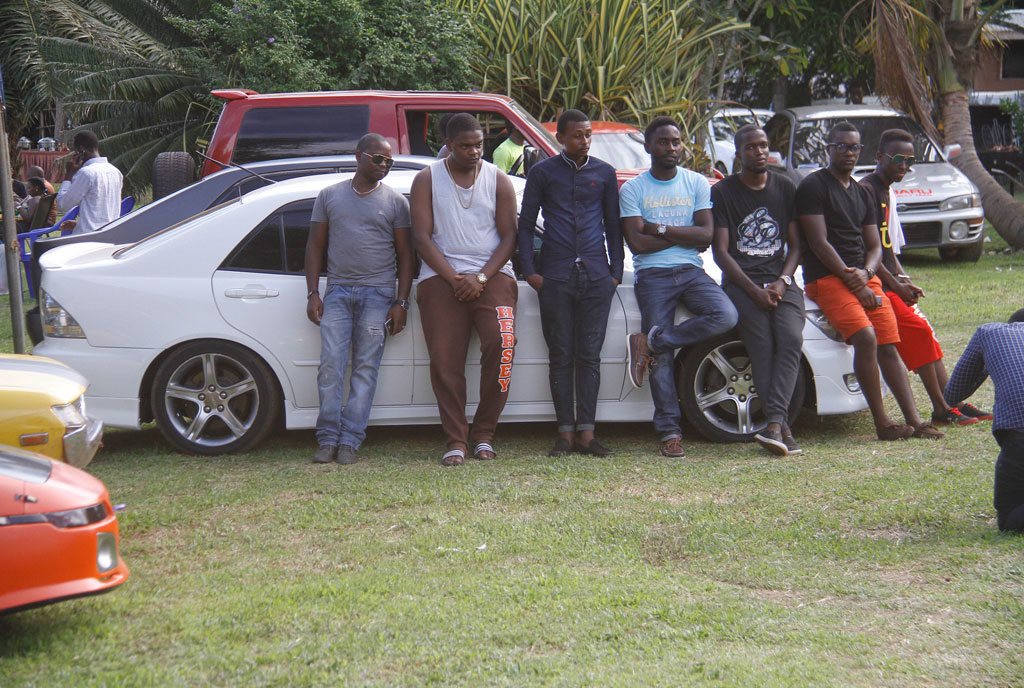 Subaru drivers are always out to release energy and have even created a Facebook and WhatsApp group. PHOTO/ABUBAKER LUBOWA

1. Tattoos
Back in the day, you got a tattoo as a sign of rebellion. You got a tattoo to signal that you were not about to conform to status quo. It was such a huge statement that most tattoos were always hidden. Fast forward, most people in Kampala now have tattoos, some as big as the billboard next door. Every event, every memory now warranties a tattoo.
There is a tattoo for Gloria’s puppy that died three years ago after being knocked by a boda boda. There is a tattoo for Tasha, the first woman in Kampala to receive transport money and show up as expected. We now have tattoos for everything and for every place. It is now a competition for how many tattoos one can accumulate. Tattoos were for the counterculture chaps, now, to rebel is to not have a tattoo. The biggest shocker today is showing up and not having a tattoo.

2. Crocs
Not that we hate crocs, but for those of us who went to traditional schools, crocs were the kind of footwear banned from the dining halls. Crocs only had one place, and that was the bathroom. Why on earth would a bearded adult wear a plastic shoe?
Then Najjera happened! Then Bulindo happened! Then road trips happened! Then Subarus happened! And before we knew it, we had fast descended into a crocs and socks generation. Crocs have become the Ugandan version of ‘chillaxing’. Crocs are the new normal. We wear crocs to the beach, for the weekend shopping, for every picnic, house party. It is crocs, and nothing but crocs. No wonder this government cannot take us seriously. Imagine a father showing up to a visitation day in crocs? Wait a minute, would that father even show up? He would be on the run!

3. The sweat pants generation
If the government slapped a ban on sweat pants, most men would have nothing left in their closet. Sweat pants have become the quickest escape. Gone are the days when we wore our best on Sundays. Sundays are now days to move around in sweat pants, in our pajamas. No more reason stressing with long-sleeved shirts and khaki pants on Sundays, even God rested on Sunday, who are we to do otherwise? Back in the days, so hated were sweat pants, they had a moniker of ‘muzungu…tapa…’ They signaled the ability of sweat pants to contain everything on earth, regardless of the monstrosity.

4. Potholes
The mechanics must be celebrating. Back then, it was crazy to drive in zigzag style. Only those that have subscribed to more bottles than prescribed did these kinds of things. Now, it is abnormal to drive in straight-line fashion. Only newbies drive in that fashion. Not even the Team Chairman Convoy has this ability. Today, we have more potholes than roads. You must be a magician to find a road in Kampala. Every week, it is either a stabiliser bar rupturing, some bearings seizing, broken shafts, car tyres with impact damage, one must now play snakes and ladders with Kampala potholes. They are as abundant as our inflation. We now have the pothole index, a measure of how well we are progressing as a country. Every new child born in Kampala is given a pothole as start-up capital. And then some chaps complain that we have done nothing as a country! How dishonest of them!

5. Subarus
All attempts by your dear activist have fallen on deaf ears. It seems the more we hated on Subarus, the more they stirred purchase interest. What is it that people see in Subarus? Apparently, there is also a Subaru index, a measure of the crazy status of a nation. The more Subarus you see on the road, the more you must tighten your belts. There is nothing to this car beyond its crazy drivers, and their caps. Beyond them revving their cars beyond capacity, what else is normal about Subarus? Why is everyone buying a Subaru? Do we need more evidence that crazy is the new normal?
During the countercultural revolution, the great Bob Dylan sang and the lyrics still echo until today; “The line it is drawn; The curse it is cast; The slow one now; Will later be fast; As the present now; Will later be past; The order is rapidly fadin’; And the first one now; Will later be last; For the times they are a-changin’”

The crazy ones are now the normal ones! We saw not this coming!

In this article:entertainment, featured, trending