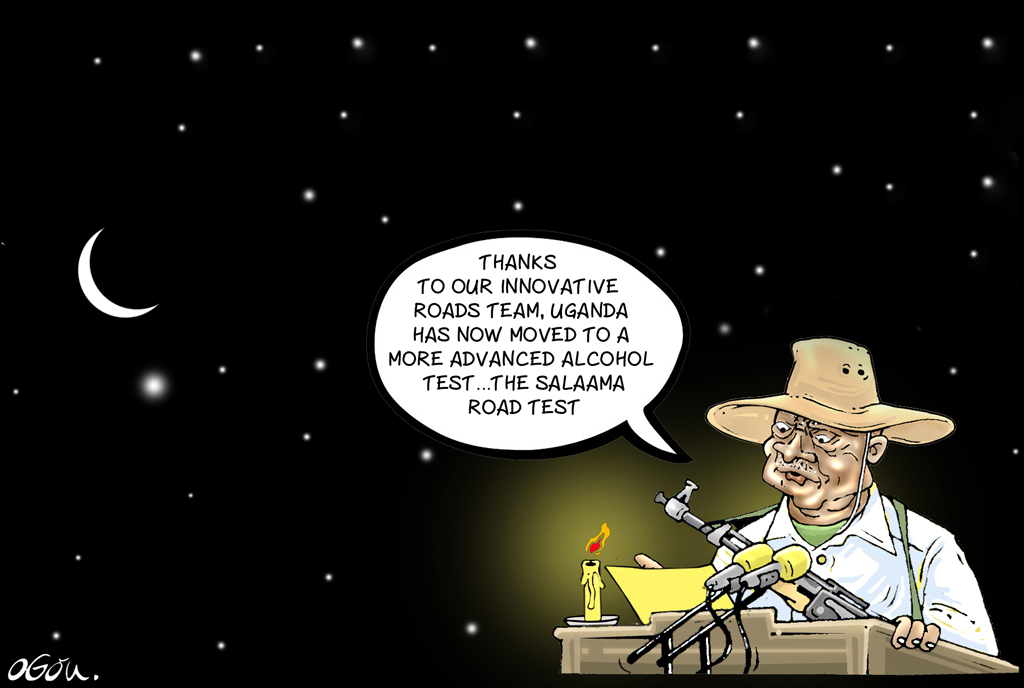 In Kampala we are all in-laws, and exes of each other…

If you think inflation has hit your stead, wait until you hear about the new rate of kameeza money. As of last week, kameeza money had been hiked to Shs1m per day. The last time this debate had ensued, it was at 500K. So how on earth can kameeza money be the equivalent of another person’s salary? Does it mean kameeza money is now salary in itself? What are we paying for here? For cutlery, a new set of furniture? That is how hair money was hiked from a 50K to 200K. We thus call upon the Kameeza Payers Association (KPA) to pronounce itself on this matter. For example, can a Munyonyo person get the same amount as a Manyangwa person? What about those chaps who stay on Bindeeba Close?

If this road does not get a mention in the Guinness Book of Records, then we must redefine the criteria. This is the first road in the world where potholes show love to every tyre on the car. Thanks to our innovative roads team, Uganda has now moved to a more advanced alcohol test. Instead of using a breathalyser, the traffic police has introduced a new method. If you suspect that someone is drunk, you simply subject them to the Salaama Road test. If they drive in a zigzag style, then they are sober. If they drive in a straight line, you are dealing with a drunk person. The real test of courage are the people who ply the Salaama route every day. It could explain the many spas in the area. After those road bumps, one surely does need a massage.

Uganda is an agricultural nation. With the current digitisation, many Ugandan corporates have embraced digital farming. It all starts with one purchasing farm land, any place along a Mityana or Masaka road. At the start, one is active every weekend. As part of digital farming, one is required to take a photo of every activity and caption it; #FarmingistheFuture.

Two months later, one transitions into proper digital farming. Here, one employs WhatsApp to get updates from the farm. Every day, you will hear a corporate talk about their farm until you ask them about the activities of the farm. They will always refer to the guy at the farm. The guy at the farm knows all the fertilisers, all the pruning and weeding activities. He knows the farm better than the farm owner. A year later, the corporate farmer will show up on Twitter to confirm to the whole world that agriculture is a lie. A lie when you are farming from the comfort of your Kampala office? What did you expect Ken? Wonders?

In Kampala, we have all become one big family. At least you know someone who knows someone who knows someone. In Kampala, there is just two-degree separation. It is likely that your friend or a friend of your friend has dated your current girlfriend. Throw in the side-bae business and then you have a fully wired network. No telecom company can compete with Kampala’s sexual network. No wonder the people in Najjera are reading this part silently. If you drew Kampala’s sexual network, we would all be related. We are all in-laws, and exes of each other.

Nothing has humbled Subaru drivers and diesel car owners like the current fuel prices. Of late, Ugandans are praising public transportation. You hear them make statements; “the conversations in taxis are interesting. Can you imagine boda bodas are more efficient?” No Daisy, why now? Why are you making these great observations currently? Gone are the days when everyone offered to give a lift, drop a friend after a night out or pick up their partner for a weekend. This is the time when everyone is admiring the sachet cars. The ones that consume fuel in drip irrigation style.

The problem with modernisation is that there is a sweet name to everything these days. In the past we had cleaners, now we talk about professional hygienists. We had boda boda riders, now we have two-wheeled carriers. It has not been any different from slavery. It is now branded as labour externalisation. Why would the best, youngest, most energetic lot of a country be exiting in thousands every week? And why would passport officials act like gods? What is the big deal with offering young chaps documents that permit them to go into slavery? An express permit is not express anymore! In Uganda, it is now a shocker when something works. Because nothing ever works!

Uganda government officials are always rushing somewhere. But we wonder, what is the outcome of this rush? The results do not seem to speak to the urgency they exhibit on the road. For a country that is still among the poorest, for a country where fuel hits a new high every day. Where are all these people rushing to? Why would a Minister of Agriculture ask for a right of way on a Monday? To grow more coffee? To meet Pinette? What about a Minister of Finance? To arrest inflation?

Of late, you have sirens coming from both directions. We must deal with potholes then deal with our important officials, then deal with Subaru drivers, then boda bodas, then taxis. Let us agree that going forward, the right of way must come with a justification. State House officials should give proper reasons for the rush. Is it to prepare the President’s cassava breakfast?

In this article:entertainment, featured, SATIRE, Sqoop, States of the Nation Address