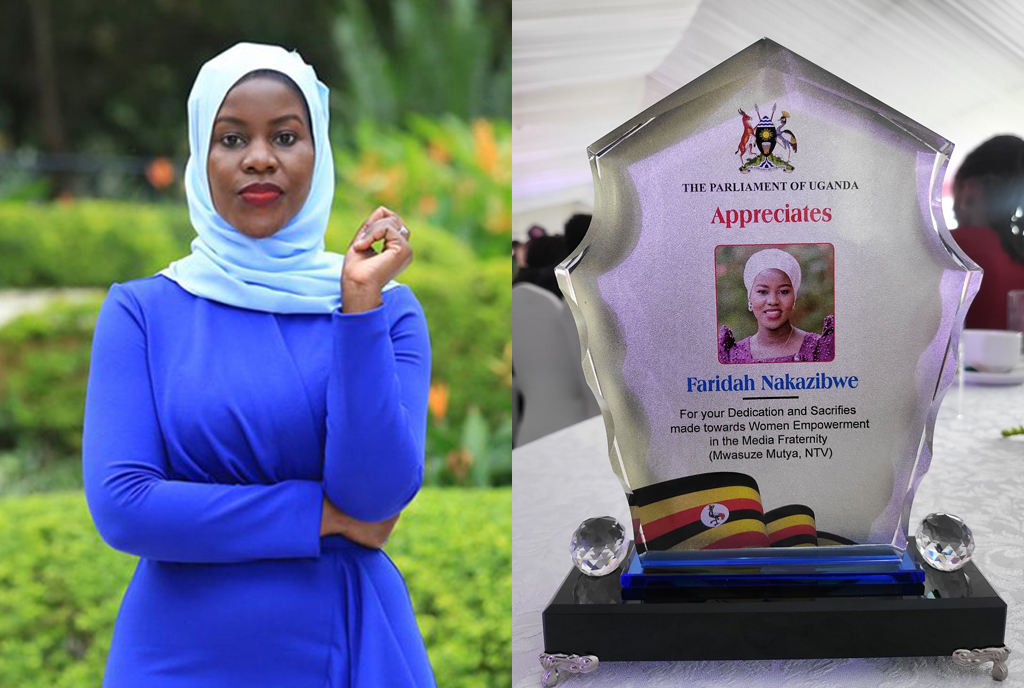 On Friday during the national prayer breakfast meeting at Sheraton Hotel, the women in Parliament appreciated Nation Media Group’s Faridah Nakazibwe’s consistency and integrity with an award.

One of the reasons they gave for giving her recognition is that she has been consistent on NTV. She took to social media to share the good news, “One of the reasons they gave is… “You have been consistent with and on NTV.” The main reason is that I have used the platform to give other people (no matter their status) a chance to share their experiences. Don’t give up. Someone is watching and they’ll officially appreciate it,” she posted.

One of the reasons they gave is… “You have been consistent with and on NTV.” The main reason is that I have used the platform to give other people(no matter the status) chance to share their experiences.

Don’t give up. Someone is watching and they’ll officially appreciate. pic.twitter.com/4OD3C62M8L

Fans and followers then flooded her social media pages with not only congratulatory messages but also testimonies of how her “Mwasuze Mutya” show that airs, Monday-Friday on NTV and Spark TV has inspired and changed lives.

A one Tr. Alexander Habimaana revealed that Faridah’s Mwasuze Mutya has changed lives, and families and also mended broken marriages.

Winnie Praise said: “You deserve all Fady thank you for your effort dear..your program didn’t live me like the way I was since I started watching it,”

“You taught me about narcissists on mwasuze mutya, well done mama this goes to u and all the viewers,” Doreen Nasubo said

While some people thought Faridah’s show is for women, Emanuel Ndyanabo testified that even men have been inspired.

“You inspire not only women but all of us

Duke of Bunyoroshire said: “You’ve Used your Platform to touch many lives and get to inspire droves from your hosts of different personalities. Thank you For Your Service to Country. May allah grant the wishes of your heart. Its your humility, care and kindness for Me,”

Some fans and followers after the achievement, believe that now is the time for Nakazibwe to represent them at the Parliament. However, there are those who think otherwise.

Jeff Ayebale said: “Spring board to “Honorable” status. Sembabule city is waiting with open arms! Food for thought. Congratulations though,”

“Do whatever you want but don’t join politics. It maybe a trap for you. You will get the money but you will be used against your people. Be very careful. Don’t be like,” Red Flag warned

Because of her hard work, Jesse Makanga assured that Faridah will never cease to be remembered by men and women of brain. “Even our children and grandchildren will be told the story of a great woman of the time. My prayer is that you live longer than you should,” he said.