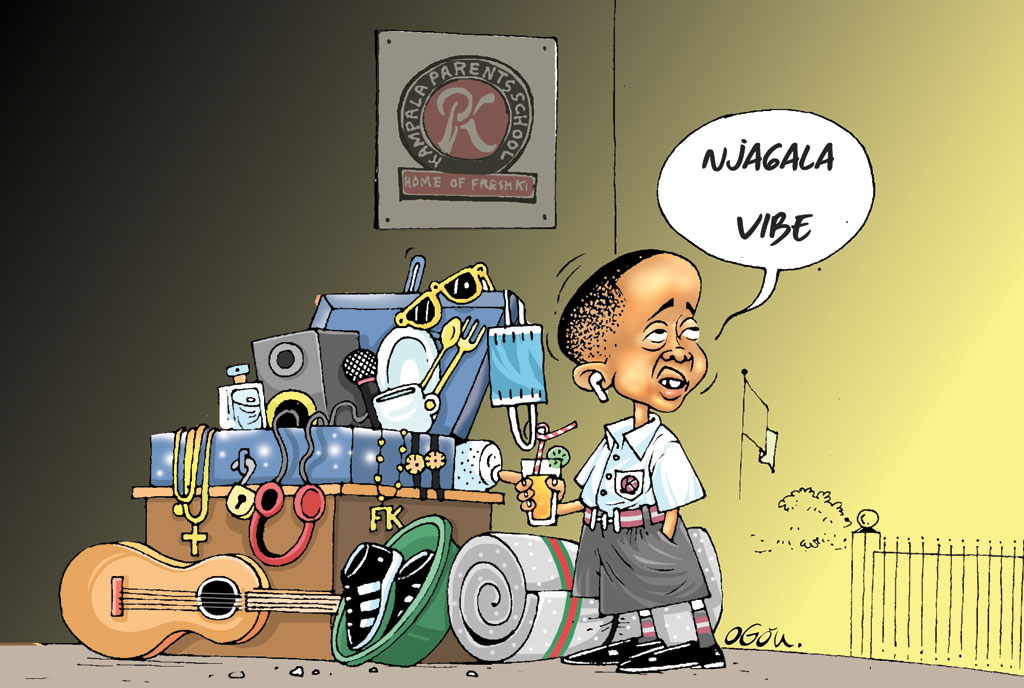 Reality check: For many parents, teachers and students, this will be a week to remember. Before the pandemic, no one ever predicted that there would come a time when schools would close indefinitely. Yet, here we are, students are back to school, but are they? Here are the pivotal moments in the first week.

Parents finally faced the biggest of conspiracies, aka the school requirements. With the Covid-19 SOPs, everything was now justified based on this. Schools were requesting boxes of masks, social distancing fees, rapid testing fees, name it all. The children made up by requesting for Dior suitcases, and TikTok mathematical sets. Suddenly the single chaps were celebrating, at least they had a reply to the famous Valentine question; “Valentine’s is coming, where is your boyfriend?”

In other news, every parent without a gamba n’ogu faced it rough when it came to partial school fees payments. Some such as Rugayampunzi became creative by heaping loads of titles on the school bursar. Bursars were addressed as; ‘Majesty Gen. School Bursar.’

Parents became cleverer. Given that the government has learnt to close schools without warning, several parents vowed not to make full payments. Parents are now paying in monthly installments. Parents are now treating school fees like rental payments while keeping a close watch on the Ministry of Health and any potential fires.

The teachers were not prepared for their new students. Imagine a scenario where most students had become instant celebrities on TikTok. Teachers now had to adjust to playing both roles as fans and teachers. When the students misbehaved, teachers asked: “you want to Bamba, you want to chill with the Big Boys?” When the teacher wanted to get the attention of the class, all she had to do was shout; “njagala vibe…”

In nursery school, teachers faced a big problem differentiating between ‘rions’ and ‘zebras.’ Kids were heard shouting during break times; “they are running, they are running after me.” Teachers couldn’t risk telling the kids to shut up, lest they respond with; ‘and bend over.’

Other students complained that different voices were haunting their minds. One student commented: “I was trying to concentrate in class only to hear the lyrics of Lineho and Peru…” For those who wish to become head prefects, the manifestos will now feature promises such as; “once I am elected, I will ensure that all students have access to TikTok.”

In other schools, parents forgot to pick their children in the evening. For the lucky few that remembered to pick the children, the struggle was real trying to tell their children apart. “I almost picked the wrong child. These masks won’t be easy on us,” one father narrated.

Masks also gave students invisible powers. Now, students can secretly mock their teachers. “If the class is boring, you can always laugh under your mask without any consequences. I wish we never abandon this culture of masks.”

Although the government lifted the curfew during this first week of school recommencement, the minds were not prepared to move on. As usual, by 9pm, you would barely find a car on the streets of Kampala. Perhaps parents are still undergoing traumatic ordeals this first week. Or better still, the minds have accepted this way of life. That life stops at 9pm, and beyond that, if one is not a Big Boy, then he ought to be at home.

Unlike the Uganda Stingy Men’s Association that failed to be registered because no member was willing to pay the subscription fee, the case was not any different with the Big Boys. The Uganda Big Boys Association failed to come to life, as every Big Boy was counting on each other to clear the bills for everyone. At their last meeting, when the bill was delivered, each Big Boy faked a call and made a walk to the gents.

Several teachers moved on from the profession. After two years of closure, some teachers went on to look for greener pastures. Some went to the Middle East, while others have since become instant hits on social media platforms. It is not any different with the students. Some students started businesses and have had to make serious decisions between stopping their businesses and continuing with school or dropping out altogether. Parents this week entered long negotiations with their children with promises of upping their pocket money to match with the returns the students have been making from their businesses. Schools shouldn’t get surprised when students keep coming up with endless excuses for home gate passes.

6. We still can’t tell when the President will open bars

The old man with a hat becomes unpredictable every other day. “Concerts and bars will reopen two weeks after schools open,” so he said. And those two weeks are conditional on many things. They could be work weeks, they could be equivalent to a Covid-19 wave length. They are also dependent on the President’s mood, in case nothing disturbs his peace. They could also be dependent on how soonest we can capture a guitar and saucepans from the jungles of DR Congo.