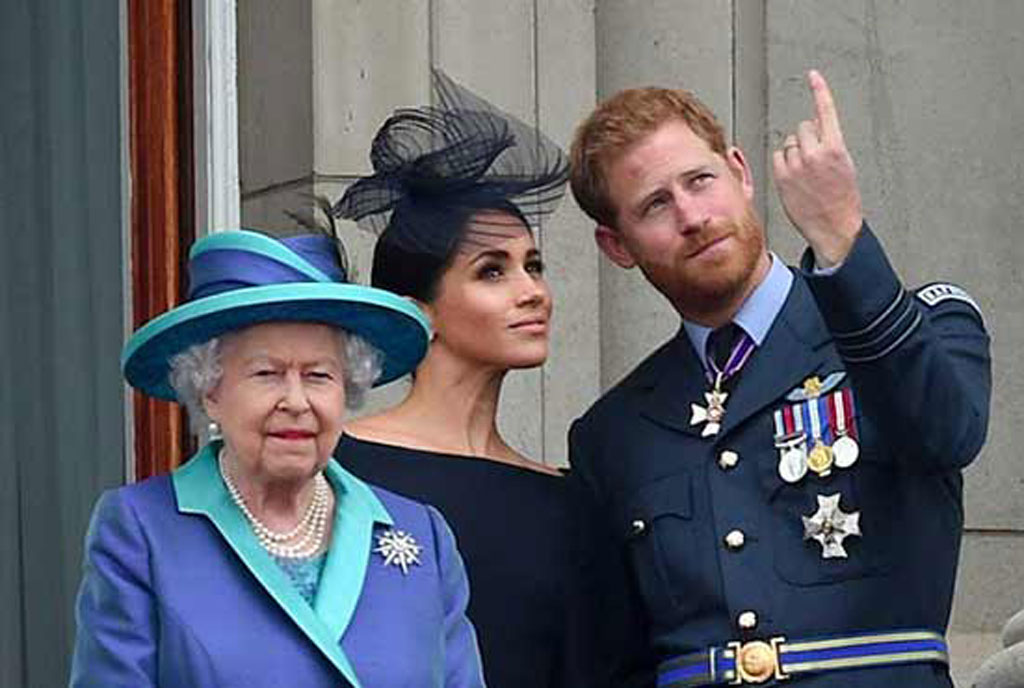 Queen Elizabeth II on Tuesday responded to explosive racism claims from grandson Prince Harry and his wife Meghan, voicing deep concern and sympathising with their troubles with royal life. “The whole family is saddened to learn the full extent of how challenging the last few years have been for Harry and Meghan,” she said in a statement.

“The issues raised, particularly that of race, are concerning. While some recollections may vary, they are taken very seriously and will be addressed by the family privately.” Buckingham Palace has come under mounting pressure to respond to the claims made in an Oprah Winfrey interview first broadcast on Sunday, which triggered a crisis unseen since the 1990s.

It set off a whirl of speculation about the identity of the senior royal who asked how dark their child’s skin would be before he was born. Meghan, whose mother is black and father is white, also spoke about how she had suicidal thoughts but failed to receive any support during her time in the royal family.

The explosive racism claim has reportedly left the palace in turmoil and scrambling how best to address it. Prince Charles, Harry’s father and the heir to the throne, earlier ignored a question about what he made of the interview during a public appearance.

A YouGov poll of 4,656 people after the interview aired on British television on Monday indicated almost a third (32 percent) felt the couple was unfairly treated, the same proportion as those who thought the opposite.

‘Blowing up his family’

Harry and Meghan’s claims have brought global attention on one of Britain’s most prominent families. Attempts have been made to draw in Prime Minister Boris Johnson, who has himself been accused of racism.

But he refused to comment, even as political calls mounted for a full inquiry and the White House and former US secretary of state Hillary Clinton spoke out. The crisis engulfing the royals has for many brought back memories of the very public collapse of the marriage of Harry’s parents.

His mother, Princess Diana, collaborated with the author Andrew Morton in a revealing 1992 biography and gave a bombshell BBC television interview in 1995.

In it, she said both she and Prince Charles had been unfaithful, that he was unfit to be king, and that she struggled with self-harm and bulimia. Meghan’s estranged father Thomas Markle has defended the royals, saying he hoped the skin tone comment was “just a dumb question”.

“It could just be that simple, it could be somebody asked a stupid question, rather than being a total racist,” he told Britain’s ITV.

Over 17 million viewers watched Winfrey’s two-hour interview with Harry and Meghan on US broadcaster CBS on Sunday night.

More than 11 million people then tuned in to watch it in full on Britain’s ITV, the channel said. The couple quit royal life last year and now live in California with their young son, Archie, and are expecting their second child, a daughter, this summer.

Harry, 36, has admitted his mother’s 1997 death in a high-speed car crash as she tried to flee paparazzi photographers affected his mental health and his view of the media. He and Meghan, 39, have accused newspapers of racial stereotyping, particularly set against coverage of Harry’s sister-in-law, Kate, who is white.

Their comments about the strictures of royal life and claims of unwavering attitudes have wider implications for the monarchy itself and its role in the 21st century.

Breakfast TV presenter Piers Morgan, who accused Meghan of fabricating the claims, quit his show Tuesday, after more than 41,000 complaints about his comments to the regulator. Neither the queen nor husband Prince Philip made the racist comment, Winfrey told CBS.

But it could still be damaging as the monarch is head of the Commonwealth, an organisation comprising 54 mainly former British colonies, many of them in Africa.

Mass immigration has transformed Britain under Elizabeth II’s reign, with a rising number of people defining themselves as British-Asian, black-British or of mixed race.

And while press and commentators have expressed shock and outrage over claims of racism in the royal family, one woman who identified as mixed-race told AFP in south London’s Brixton she was “not actually surprised”.

“I’m happy the truth was told and I think it was a long time coming,” the woman, who gave her name as Rroutes, said.

“Seeing Trump, seeing Brexit, just seeing everything that was maybe what people think was beneath the surface but it has always been there and now it is being exposed,” David Perry said.

Harry himself used a racist slur against a former military colleague and was once pictured wearing a Nazi soldier’s uniform at a fancy-dress party. But he has said meeting Meghan had made him confront the issue, and he is now championing projects to tackle racism.