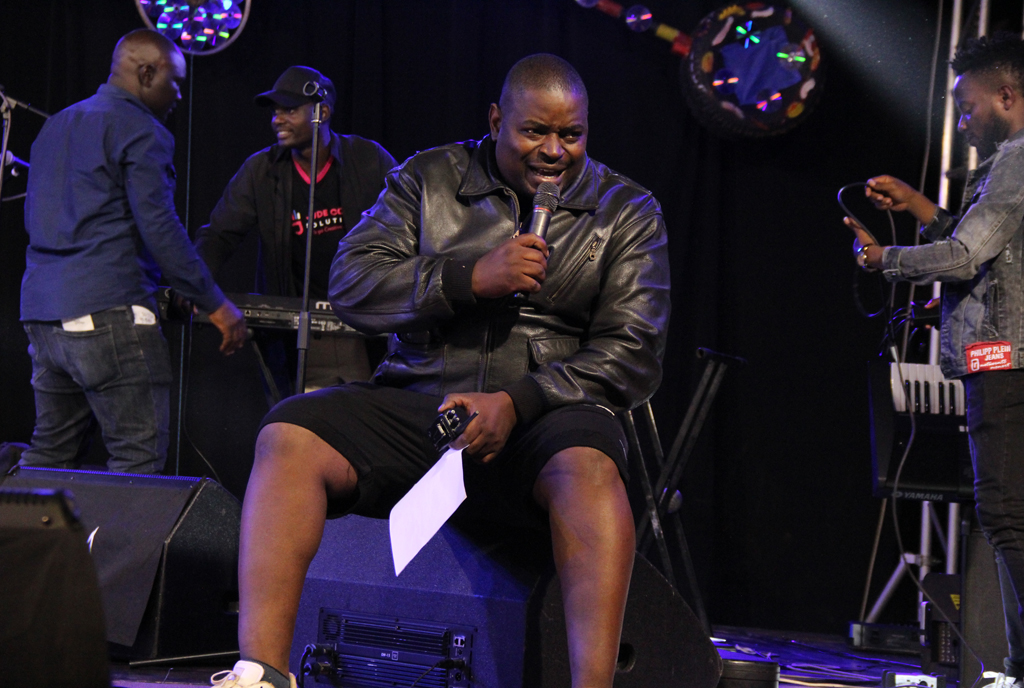 Comic Relief. Edwin Mukalazi is a comedian with an appreciation of many art forms. Every year, save during the Covid-19 lockdown, th assistant production manager at National Theatre. holds a show dubbed the Lone Battle, a comedy performance which blends hip hop and dance. In an interview with Edgar R. Batte, Mukalazi talks about his inspiration, why theatre needs to adapt to the times and more.

What is the essence of your lone comedy battle?

To make people kill off stress and learn while laughing, especially in the aftermath of the Covid-19 pandemic and the current economic crisis we are facing.

Laughter is therapeutic and soothing. The other inspiration for the show was to stay active as an individual in the comedy game. When I started out with Theatre Factory, I had too much fire burning in me. I really needed to be back on stage.

You have comedy, hip hop and dance all fused into one show; what is the inspiration behind the concept?

I grew up consuming a lot of hip hop and initially, I wanted to be a musician but because of the stereotype surrounding musicians and with my background of a Catholic family, I never pursued the music bit.

I had always felt the urge to perform, so this is the best opportunity for me. As for dance, I love it. I have performed with Latin Flavour and was named Mr Bachata.

In school, I used to choreograph so I have always had a passion for dance. As for comedy, it is what many people know me for. I have done it for about 20 years. I decided to combine them for uniqueness so I can stand out from the rest.

You are not on the regular comedy circuit. What distinguishes you?

I have not been very active, given that my employment consumes much of my time. Acting is also slow to pay yet I am assured of a salary somewhere else, so I tend to concentrate on my employment. I am also not aggressive at marketing my products, so I guess I need to find a manager then I can do better.

Almost every comedian today is doing stand-up yet as creatives we should be seeing more from you. Is this due to audience demand or are many creatives afraid to explore new ideas?

Personally, I have performed many scripted plays such as The Marriage of Anansewa, Romeo and Juliet, The Black Mamba, Muduuma Kwe Kwaffe, the list is endless. I have performed tragedies and comedies, done monologues and many other stage performances.

I am not limited to one style perhaps because I am talented but also went to school to study this craft. Many people are doing solely stand-up comedy since they may not be in position to perform scripted productions because they are hard and require a lot of time and discipline. 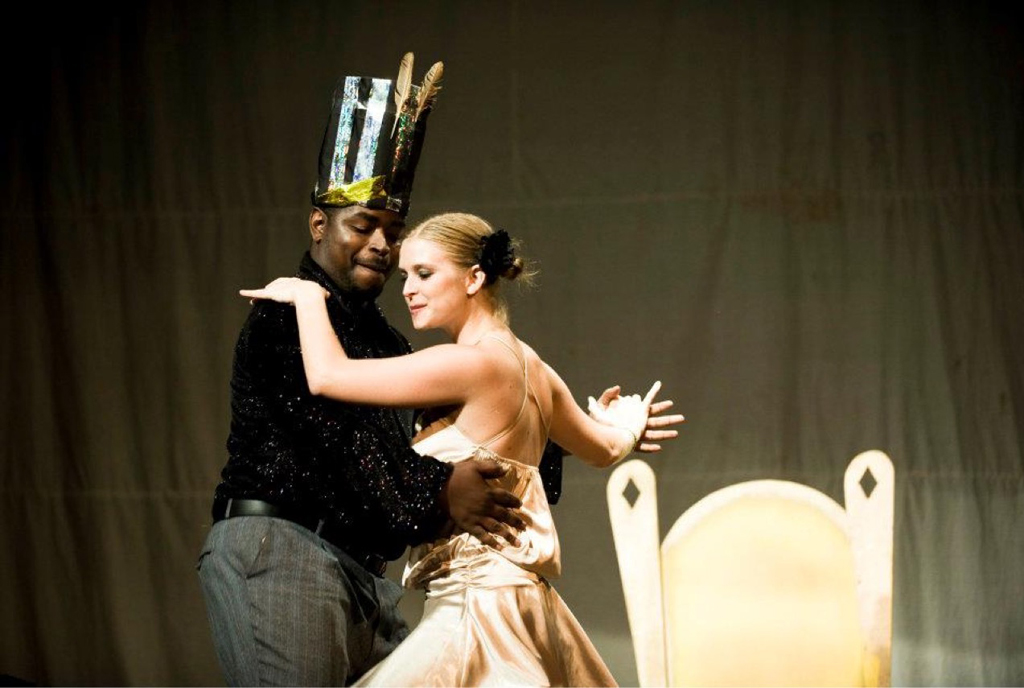 You were behind the newspaper comedy outfit, what happened or became of that vision?

We had formed a group called 4Sum Foundation doing the newspaper theatre but the world separated us; one member went to Germany, another is more into film, another went to Qatar for work, so I stayed alone but I wish to revive the idea soonest.

You are one of the few Makerere University graduates who has not explored radio, why is this?

By the way I worked on radio for two years after university as a sports presenter at Metro FM, but my desire was to be in theatre and film. I looked out for different theatre opportunities.

What pushed me is that one time I saw a very lousy performance on national television. I got so annoyed but on second thought, I knew I was partly to blame because I was trained to write scripts, direct them and act but I had not fully done that. This really pushed me back to film and TV. That is how and when I landed an opportunity to work at Uganda National Cultural Centre and got a role in the famous Trickstars show on NTV.

Why aren’t you into television production like you were during the Trickstars series?

I have done some works, although not as intense as Trickstars and Katemba Mu Kooti. I have done Cheka Cheka Junction, a comedy show that was aired on KBS TV during the Covid-19 times.

We then moved to ABS TV for about a month, but they went through a restructuring, so we had to halt. Financial resources to produce are a challenge too.

We had our own Joseph Opio scale the heights years ago by getting onto the highly acclaimed The Daily Show with Trevor Noah. But for some reason, we have not seen any others attempt that kind of script writing. What is stopping you from crossing borders?

I think that my Job at the National Theatre occupies me so much. I just need to plan better and re-strategise, although I have been involved in many festivals outside the country such as Rwanda, Zinduka Festival in TZ and JAMAFEST in Tanzania and Kenya. I just need to dig deeper.

I would do my best to build from the grassroots. That is a very sustainable way of developing the arts. I would also do my best to spread artistic infrastructure around the country as well as do a lot of activities outside Kampala.

What will it take for the theatre to host big theatrical productions?

We need to hold workshops for new artists in terms of capacity building. We also need to have art funds so that artists have the liberty to think of big ideas without the fear of how they will be financed. But theatre as a building will need to improve on the facility and have state of the art equipment. That will pull many other celebrated artists in and outside the country.

What is your two pence on how theatre companies can find commercial reward in their artistic efforts?

They need to avoid splitting up for at least the first six years so that they can build a chemistry working together. Financial literacy in groups is lacking. They need to work on this as well as register their businesses, as this will help attract funders and government support.

You speak French, what would you say are the benefits of an artist knowing an additional foreign language?

I love French and the benefits are that I am able to perform many roles better than someone who is limited by one language. Then I also have a wider range of networks and market. Even when I am costing myself and my work, I will have better bargaining power than one who speaks one international language. 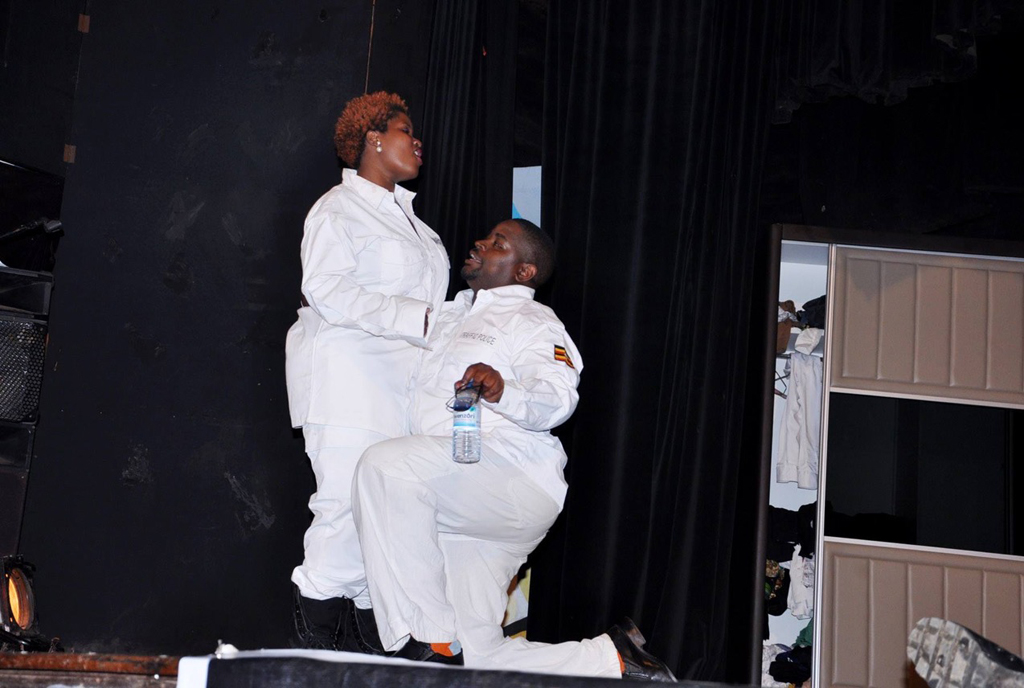 How can the arts sustainably be developed?

We need to first develop the systems, registration, and mapping of artists, have credible art guilds, and formalise operations. Encourage artists to study and focus on doing arts as a full-time job, not as a hobby. Government should also reduce tax on arts-related ventures and lend money to established artists to produce.

Have you thought about owning a space like Ndere Centre?

I have thought of owning an artistic space and my idea is mainly to hold an annual comedy festival, a filming studio and a bar. I have started off but looking for more investors.

What makes you tick as a comedian?

My body. Doing a lot of improvisation over the years has taught me to think fast while on stage, especially when I am doing sketch comedy, good verbal reflexes on lines, if that makes sense, then a lot of experience.

Explain your experience and feeling while delivering on stage…

While on stage, especially when I have the right audience, I feel that I can achieve anything artistically. I get possessed and excited. I enjoy the show too. If you notice, I always laugh at my humour too. When I watch the shows after, I wonder how I manage to do some things.

If you are to speak as a consumer or someone from the audience, are comedians offering value for money and are you convinced about the level of growth of comedy as a genre of arts?

We have come from far as comedians, but there are a lot of challenges, especially with artists who are specialising in doing low-end comedy, recycling jokes and using vulgar language. That is how they roll. The audience many a time gets agitated, although with uptown guys I think people are getting value for their money.

What have you prepared to offer your fans?

Ultimately, I am going to have more comedy shows and a tour around the country. I am soon shooting a comedy series aimed at the international audience. For the Lone Battle show, a lot of gum tearing punchlines combined with hip hop and dance will be in plenty. The show is to die for.