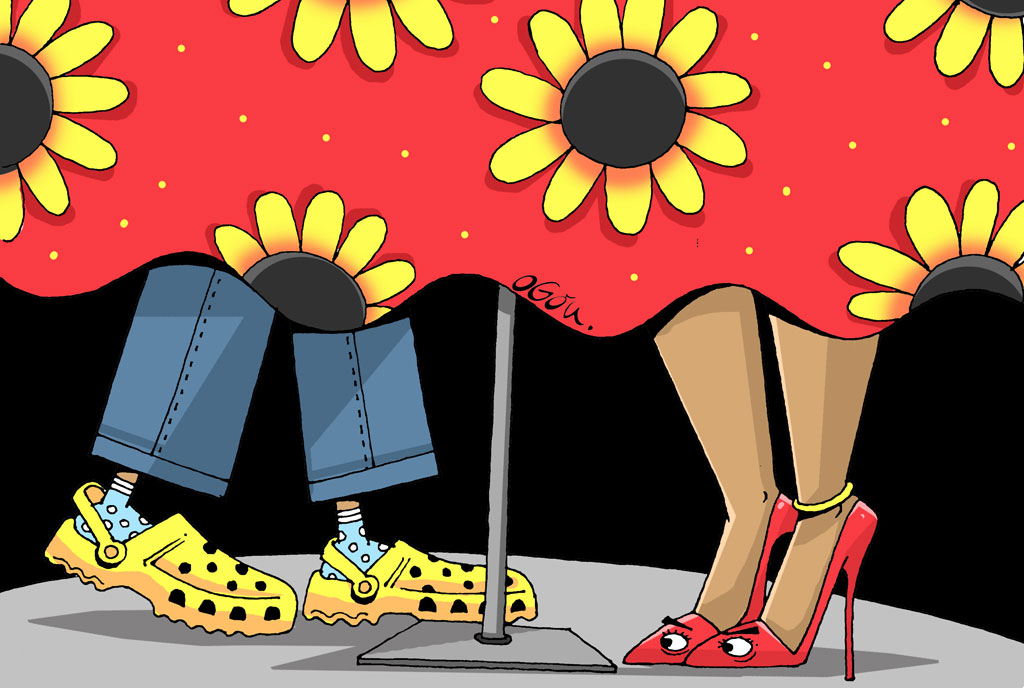 Men back then would shudder at the idea of a plastic shoe-wear – I mean crocs!

Changing times:  As a country, we shall heal from everything, but we shall never heal from the fact that Najjera happened to Uganda. For Najjera did set the bar too low for men in Uganda. To be a man in Najjera meant to aspire for less, to have an apartment, a pair of crocs, a Bluetooth speaker and a Subaru to crown the day. Beyond that, there is nothing more to the table. And because of Najjera, we are asking the question; “where have the Ugandan Men Gone?”

In the past, men disagreed ideologically, and when they did, they organised public debates where they took on a dialectical approach of dismantling each other’s arguments. Today, the arguments have been memefied. Today’s men argue with emojis, memes and emotions. Today’s social media warriors cannot put up a face-to-face debate. They speak volumes on social media and cow in a public space.

Back then in our school days, crocs signified immaturity. Those of us, the ‘mbedos’ of Senior One and Twos were given an allowance to wear crocs. For the students in the upper sections, crocs were a taboo. Crocs were banned from the canteen. Now that was many years ago in a single sex school based in Masaka. Many years later, crocs have re-invented themselves. Yet, the men back then would shudder at the idea of a plastic shoe-wear becoming a status symbol of today. At the end of the day, it is still plastic. How did this plastic get promoted from the bathroom to the public space?

Call me old fashioned, but there is no way we are buying the idea of crocs. Today’s men ought to outgrow crocs. And embrace actual footwear.  You can tell a lot about a man based on his shoes. And a man who wears crocs, well…

When is the last time people broke up honourably? Not anymore! If you date a Ugandan man, be prepared that you will not know when the relationship has ended. Ugandan relationships end like mysteries. The man simply ghosts! No more phone calls, no more replies to your WhatsApp messages. The man simply moves on.

Back then when we still had men in Uganda, there were official ways of ending a relationship. You called up someone’s daughter, organised a date and conveyed the hard news. Ugandan men have lost the boldness, and the courage to make the hard decisions.

This is probably a generation of the worst drivers in history. Ugandan men have come to conflate driving at high speeds as a sign of being good drivers. Ugandan men are indecisive drivers, with thin skins. They take things personal on the road and lack the patience and decorum required of good drivers. Poor Subaru drivers are always in a rush to escape the madness of other Ugandan drivers.

They want the benefits of a marriage at the cost of a single life. And this fear of taking responsibility has turned most Ugandan men into beggars. They would rather shower a crown Prince on Twitter with praises as a gateway to some quick income than hustle their way in the world. Ugandan men lack the art of standing on their own feet, the dignity that makes a man, a man; The ability to decide and live with the consequences of their decisions;. the ability to hold one’s head high even in the deepest of waters.

You cannot trust a Ugandan man these days. In the past, men were revolutionaries, they held up for each other. Male friendships were cast in stone! That is why men had blood pacts. Betrayal was not to be expected! Today, a Ugandan man will betray a friend for a chance to dine with a royal. Ugandan men will trade loyalty for attention. In the past men would starve to death if that was the price to pay for loyalty.

These days Ugandan men stick to nothing, they do not honour promises. If you are organising a wedding and a Ugandan man makes a big pledge, clap with pessimism. The phones will soon be switched off. Everything is now for the attention.

They want to be seen around people that matter, in places that matter, pretending to do things that matter. Who knew that there would come a time when men would top the gossipers’ charts?