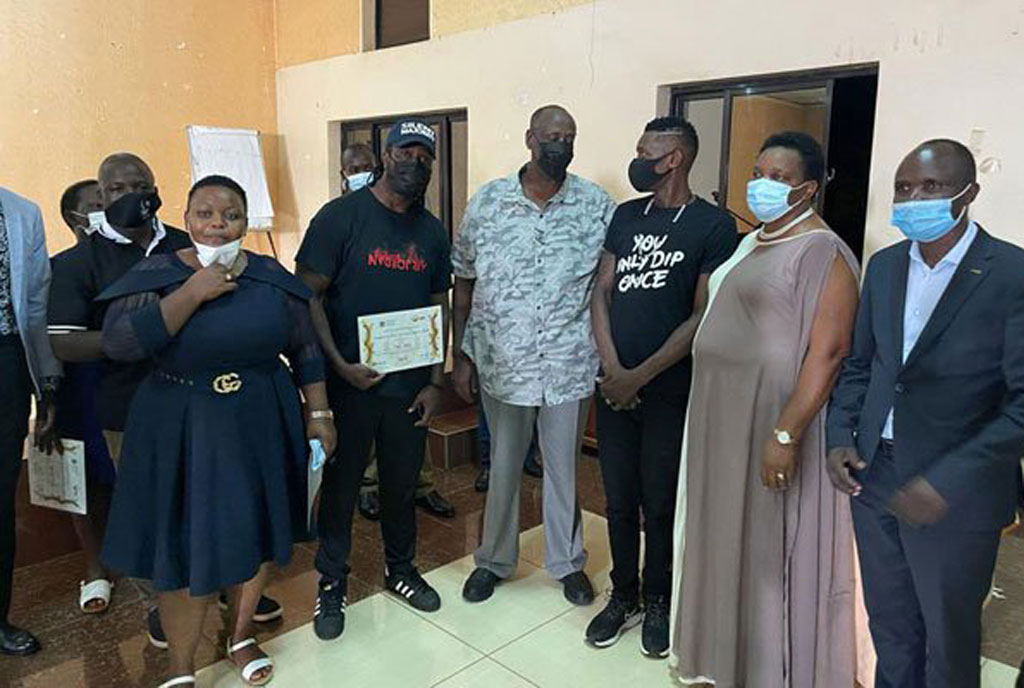 Gulu City has not only been a place of pilgrimage for artistes, but is also home to many of them, including Eezzy, Laxzy Mover, Polite Mosko, Sean Simple, Liama, Loketo Lee, Romeo Odong, Lucky Bosmic Otim, Ruth Kurt, and dramatist Okello Kelo.

Gulu too has studios run by producers such as Sai, and Kaunda, who exhibit high levels of technical knowhow, their not-so-hi-tech recording equipment notwithstanding.

During my visit, four songs were recorded. I also witnessed music video shoots capturing the traces of Acholi traditional life and architecture in the suburbs of Gulu City. These recordings were being executed by both the local as well as visiting artistes from Kampala and South Sudan.

Renowned audio producers such as Kroch, Davi, Washington, and Michael Fingers have pitched camp in Gulu, working with local producers to make music. The artistes are acutely aware that music competition locally and internationally is hinged on quality production.

As such, audio producers are raring to boost their technological capacity. Meanwhile Kampala based videographers were in Gulu to support local counterparts to shoot music videos.
While in Gulu, there have also been surprising music collaborations to be outed soon.

Overall, 862 artistes graduated from the Mindset Change Training Programme, which was instituted in response to the influx of artistes to Gulu. The programme also succeeded in uniting then bitterly divided musicians.

The training also equipped the artistes with vital information on branding and its commercialisation, copyright valuation and use as collateral security and leveraging their music and brand towards achieving financial success.
While many commentators believe that money has been the motivation for the influx of artistes to Gulu, this instead opened a whole new window and revealed up to 37 revenue streams for them, which had all been clogged up and had kept the artistes in poverty.

For instance, the National Association of Broadcasters (NAB) agreed to start paying royalties for all the music played on radio and television, which will earn the artistes upwards of Shs650 million in 2021 alone.
Similarly, a conversation for artistes to have their fair Shs70 billion, which the telecoms make from Caller Ring Back Tunes (CRBTs) has been restarted. Government on its part has been earning 50 per cent of this amount in taxes.

In the same way, other users of copyright-protected works such as public transport, hospitality, education, the public sector and professional entities are to be reached.

A new dispensation in the implementation of the copyright law is emerging. It has sucked in regulators such as Uganda Communication Commission (UCC) and Uganda Registration Services Bureau (URBS) to support societies such as Uganda Performing Right Society (UPRS), Uganda Reproduction Rights Organisation (URRO), and the Uganda Federation of Movie Industry (UFMI) to collect royalties from consumers of creative content.

This is so because most copyright-protected works have for long time been consumed for free, leading to financial losses to creators.

The Gulu meeting of artistes has also made it possible to put on the agenda, copyright law reform that seeks protection of Ugandan content in the digital space and introduction of a private copying levy (PCL). A PCL is a government-mandated scheme in which a special tax or levy is charged on purchase of recordable media. In Uganda, the PCL on gadgets is estimated to result in the collection of an estimated Shs68 billion in royalties.

A lot of work remains to be done to build a strong creative industry that was employing 386,000 Ugandans by 2014.
The events in Gulu have, therefore, laid a firm foundation for strengthening the regulation of the industry; providing Covid-19 financial relief to enable recovery of artistes’ SMEs and; improving budgets towards culture infrastructure, including theatres, cinemas, public libraries, galleries, museums, and art markets.

Finally, the verdict is out that the events in Gulu City continue to inspire positive changes. The country’s artistes have been availed the perfect platform to advance key concerns to government and it is expected that a well-coordinated culture and creative industry will emerge to be a major driver of economic development both for now and in the future.