According to MC Africa, Pia Pounds owns Friday while Kenzo owns the weekend… 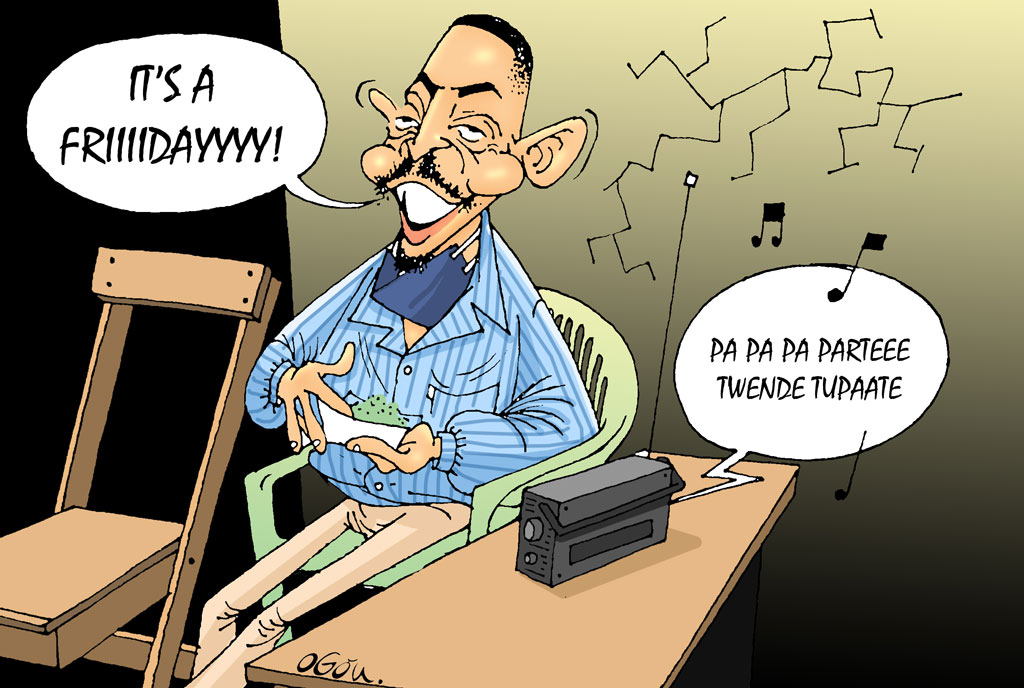 Typical UG: On Tuesday, you could wake up when Museveni has gotten annoyed and left Uganda to us.

Regardless of one’s walk in life, regardless of their tribe, aspirations, religions, name it all, all Ugandans tend to have a common week. They may differ in spend, but given a chance, all Ugandans behave the same on a day of the week. Today, we get delve into the typical Ugandan week.

In Uganda, Mondays are when everyone wants to prove that they are important. Ugandans have learned to put up appearances, whether at home or in office. It’s on Monday that a Ugandan will wake up early in the morning and rush to town. It doesn’t matter if there’s something to do or not, the rule is Monday morning is for one to prove they call some shots in the city. It’s rush hour at its best. Do not make a mistake of driving during the peak hours, you will hate everything to do with the city.

You will be dealing with lawyers. There’s an unwritten rule that all lawyers in Uganda should own a German-made car. For this reason, many will scrap up the last of their savings and loans and have some old Mercedes Benz to flaunt on the road. Problem is, lawyers are generally poor drivers. You don’t expect someone who makes arguments for a living to be decisive on the road. After all, they can always interpret the road act, speak some gibberish and threaten to serve a notice. Ugandan lawyers live and die by threats. You will be dealing with lots of them on a Monday morning.

Do not forget the barrage of bodabodas and taxis that run the road on Monday. Nobody knows better about your car than these chaps. They will hoot, nudge, and force you to drive according to their instruction guide. “Gwe sala wali tugende,” the taxi driver will command. In the evening, the story is not any different, it’s time to rush home with a stressed face. For how else will people know that you worked hard? It’s with that face. Social life on Monday is dead, people have nothing to spend in the restaurants, and their demands exceed their purchasing power.

Tuesday is that day no one understands in Uganda. We know it exists. But why exactly does it exist? If you are confused on Tuesday, do not panic, every other Ugandan is equally confused on Tuesday. Anything can happen on Tuesday. You could wake up to a celebrity scandal, you could wake up when Museveni has gotten annoyed and left Uganda to us. When it comes to Tuesdays in Uganda, expect anything, good or bad. It’s by all descriptions a bipolar day. Even the traffic officers are confused, they can stop you for anything, they can accuse you of driving a Rumion. “Iwee nani, why are you driving a toy car?” the afande will ask. I suspect ghosts come to play on Tuesday. Otherwise what explains Subaru drivers and their flying habits on Tuesday?

When it comes to Wednesday, the true habits of Ugandans come to the surface. If you could pay Ugandans to simply have fun and relax, you will have the most hardworking population. For every Church in Uganda, there’s now a massage spa. According to the latest economic statistics, the ratio of Churches to massage parlours is now 1 to 1. Who’s getting massaged? Who’s doing the massage? If you ask Ugandans about the parlours, they will all claim to know someone who owns one or a friend who goes for massage, none will confess that they’re an active patron. When it comes to Wednesday, Ugandans begin to rehearse for the weekend. And that will show in their work. They will work extremely hard in the morning hours, then slack off in the evenings.

Thursday is Uganda’s slowest day. When it comes to business, you could close your shop on Thursday and not suffer any loss of sales. Because of its proximity to Friday, most Ugandans tend to ignore Thursday. Most employees report in sick on Thursdays. Most employees lose relatives on Thursdays. If there’s a day that’s the mother of excuses, it’s Thursday. It’s best for one not to have any appointments on Thursday, chances are high they will get cancelled.

According to MC Africa, Pia Pounds owns Friday while Kenzo owns the weekend. Friday marks parte after parte. If you want a promotion, you better ask for one on Friday. It’s on Friday that money competes with money. Subaru drivers face off with Alteza drivers. They each keep singing; “I believe I can fly.” It’s on Friday that the power of makeup comes to play. Every girl is beautiful on Friday. Every man is rich on Friday. Egos are high on Friday. Do not dare anyone on Friday. They’re hyper, arrogant, fun-loving and optimistic about life.

Saturday is about weddings, introduction ceremonies and heart breaks. In other worlds, it’s also the day Ugandans pretend to do shopping. It’s pretense, because the big chain supermarkets wouldn’t be closing. Sundays, Ugandans remember that they’re married. It’s on Sundays when one gets a chance to see the Father, Mother and children. Then you have that afternoon, that Sunday afternoon feeling. It haunts many, as they keep promising themselves; “I am only working for one more year at this job, then I will leave.” Leave to go where Brian? Stop the lies!