We shall wipe out the pigs from Uganda.

Swine invasion: According to witnesses, it is not only murder, pigs are the mafias that have always been cited by different analysts. 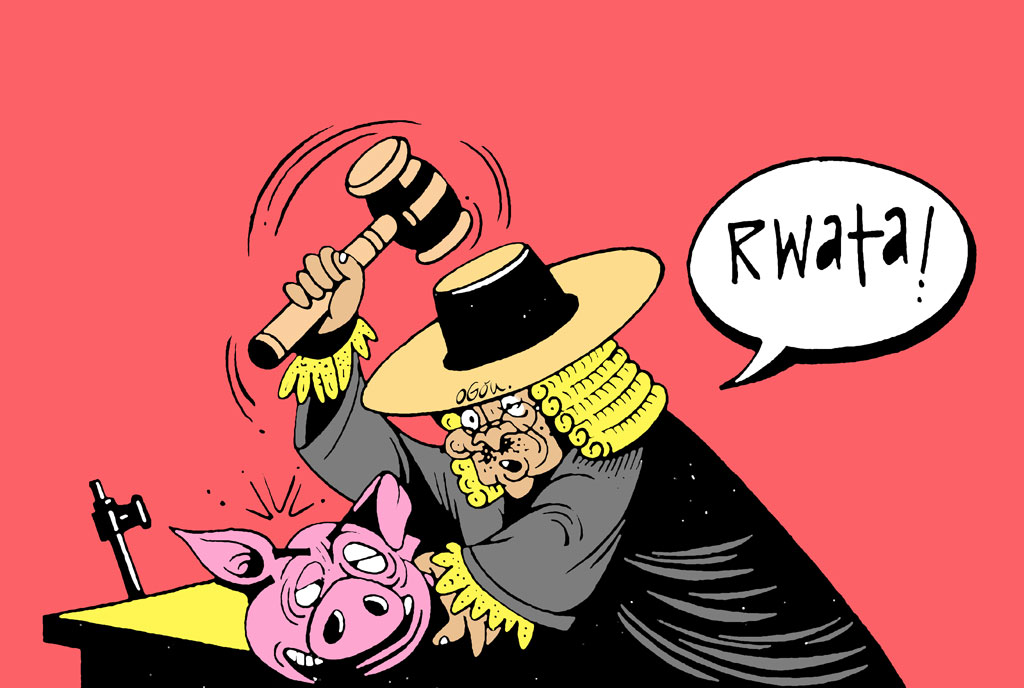 The High Court of Uganda has found pigs guilty of murdering innocent Ugandans. This followed a prolonged investigation by the indefatigable forces of Uganda.

“It’s not been an easy journey, the pigs had committed murder with impunity, assassinating Ugandans in cold blood and dodging the arm of the law. But the long arm of the law has eventually caught up with them,” Dzaddy Ssevo commented on the matter.

According to witnesses, it is not only murder, pigs are the mafias that have always been cited by different analysts. When Tamale Mirundi talks about mafias, it is the pigs. Nothing good can ever come out of pigs. They simply want to soil every achievement of the NRA revolution.

“When we came in 1986, we were blindfolded by the pigs. They told us it was Joseph Kony who was the problem. After some time, the pigs claimed it was ADF. They kept hiding under different outfits. But ever since we installed our CCTVs, we were able to monitor their activities. Can you imagine, it is still the pigs that were sponsoring NUP?” an NRM insider reveals.

As Ugandans cried over corruption, it was the pigs stealing the money from government coffers. As Uganda Airlines begins its plunge into the ground, it is the pigs working behind the scenes to cause its collapse.

“You see, when we go to sleep at night, the pigs are always busy digging up the Ugandan roads. It is the pigs that are behind all these potholes. We have everything on camera,” police spokesperson, Mr Piano told journalists.

The President of Uganda has therefore released a 10-point plan to ensure that pigs are eliminated from Uganda.

“We shall leave no stone unturned. We shall prevail over our number one enemy. We shall wipe out the pigs from Uganda. We are assured of victory,” Dzaddy Ssevo assured the citizens.

In the 10-point programme, Uganda will benchmark the ‘mayumba kumi programme.’ Every household will be asked to avail their trusted pork eater. The nominated pork eaters will be sent to Kyankwanzi for a six-month training programme in eating pork. The training will be heavily skewed towards practical sessions with a flair of the theoretical grounding.

“I have identified my great revolutionary pork eaters. They are experts at eating pork and will be passing on these skills to the young men that we identify from different villages all over Uganda. This is war. And in war, you sacrifice, you send your sons and daughters to play their part in saving the country. That is what patriotism is about,” Dzaddy Ssevo explains in his address.

In this setup, if one family sends a daughter, the other should send a son. The Operation codenamed; “Ugandans against Pigs”, aka UAP, will feature the best pork eaters alongside the best pork makers. The country will hire experts at slaughtering the pigs. There will be experts at making kikalayi, experts at roasting, experts at luwombo, and above all, some quality assurance chaps will validate service execution as per standards.

While in Kyankwanzi, pork eaters will have to graduate through the different modules. One will be considered fit for deployment if they can demonstrate expertise in eating kikalayi, muchomo and luwombo.

Once the President passes out the pork eaters, they will be deployed to different pork joints around the country. Government has also launched an application codenamed ‘Report a Pig’, aka RAP. One simply must log onto RAP and report a pig in their location. “Take a photo, upload it on RAP and the team of butchermen will swing into action to pick up that pig. We can locate the location of the pig based on the GPS capability of our application. On the App, one can also locate nearby pork eaters and pork joints. We request that all Ugandans download the RAP applications. Report a pig and save a life,” Mr Piano called upon Ugandans.

As to how long it will take to wipe out the pigs, the President was non-committal. “You know this is a Protracted People’s war. You can’t say it is tomorrow when we wipe out the pigs. You must be clear about the aim and the objective. We must work on ideologies. We must educate the people. We must be able to identify pigs and deal with them on the spot. But eventually we must win,” Dzaddy Ssevo assured Ugandans.

At the court ruling, footage was shared that showed pigs committing different crimes in Uganda. Pigs were seen at the NUP rallies shooting recklessly at NUP supporters. Pigs had also created unemployment and inflation. Pigs were sabotaging government programmes, ensuring projects never get completed. In the next week, this paper shall delve into the pig’s defence. What do the pigs have to say?