Museveni ‘21 has seen it all, has it all, and still wants more

Face-off. We have had many face-offs, we have had all kinds of battles, we have had a Bebe Cool against Chameleone, a Cindy against Sheebah, but one battle that has never been decided is the one of two rare celebrities, aka socialites; Museveni 1986 vs Museveni 2021. Who is richer? Who is cooler? Who has the better crew? It is now time to put this argument to rest. 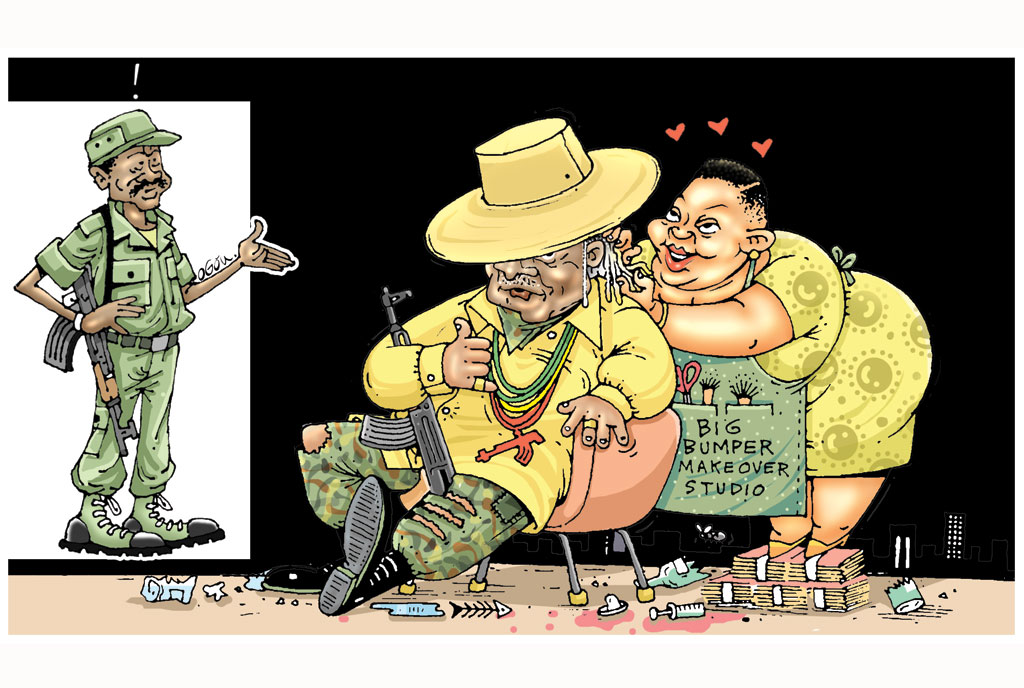 Museveni 86 is a broke chap. There is nothing to his name except Kaunda suits. He is a lifetime member of the Stingy Men Association of Uganda (SMAU). Museveni ‘86 cannot send transport money. He failed to pay bride price, and has often wondered; “why doesn’t the girl’s family pay groom price?” He buys his furniture in Katwe and keeps his life simple.

Museveni ‘86 has that youthful body, that hunky smile, but he got one problem, he is broke. Nothing is as unattractive to the other gender as a broke man. But Museveni ‘86 has the style factor. Although he cannot afford to shop from the best in town, he has those slim-fitting suits. He would give a Mwenda a run for his money in style.

Museveni ‘21 on the other hand is the ultimate bore when it comes to fashion. He wears those ill-fitting suits. His trousers and shirts are the kind that were nicknamed ‘legeza’. He doesn’t care about fashion, he is done giving a damn about fashion things. But he hasn’t given up on showing off his fitness though. He is a man of the camera. Occasionally when he gathers the energy to exercise, he invites the media as he records his TikTok video nailing the 30-push-up challenge. Every push-up represents a year of  his reign. Off the camera, there is nothing to prove that he is consistent with his fitness regime.

Museveni ‘86 has nothing to show. He is a broke man, carrying his ‘olubengo’, riding his bicycle and riding on the mercy of Good Samaritans to transport him.

Museveni ‘21 owns a bond of cars and planes. From the Mercedes Maybach Pullman to an Airbus. If you want some Instagram worthy buddy, it is gonna be Museveni ‘21. Museveni ‘21 has seen it all, has it all, and still wants more of it.

Museveni ‘86 has a refined group of friends. He has a Mushega, Kategaya, Ssemwogerere, Besigye, Muntu, Rwigyema, Kagame and many more. They spend their days dissecting political economy, figuring out ways to root out corruption, to solve the sugar scarcity problem. They have a 10-point programme to implement at all costs. There is no time to waste, some find them boring, but they are sacrificing to make their country better. Museveni ‘86 has some high caliber international friends; the Clintons and George Bushes of this world. He represents the future of Africa.

Museveni ‘21 is straight out of Hollywood. From Kanye West to Akon, Museveni ‘21’s circle is a perfect mélange; it has a Full Figure, Bebe Cool, Bajjo, Mayinja, and many other celebrities. On first sight, one could mistake it for a music crew.

Museveni ‘86 has organic love. He does not have to buy the love. In fact, he has assured everyone that he s not going to be President for long. He wants to go to Rwakitura and tend to his cows. Wherever he passes, people shout his name. Kids now assume that every plane in the sky has him on board. They sing out; “bye Museveni, bye Museveni.” He needs no extra security detail; the people are his security. People keep pleading with him to at least contest for one more term. But he argues the problem of Africa are leaders who overstay in power. He is not ready to be one of the problems.

Museveni ‘21 is drunk on power. He has watched all episodes of Game of Thrones and now understands that ‘Power is Power’. If you don’t love him, he will force you to love him. He will switch off the internet and force you to focus your attention on him. He lives for power, breathes for power, and at all costs, will secure your future with power. He is the General of the National Resistance. He crushes and eats up all his problems as though they were samosas.