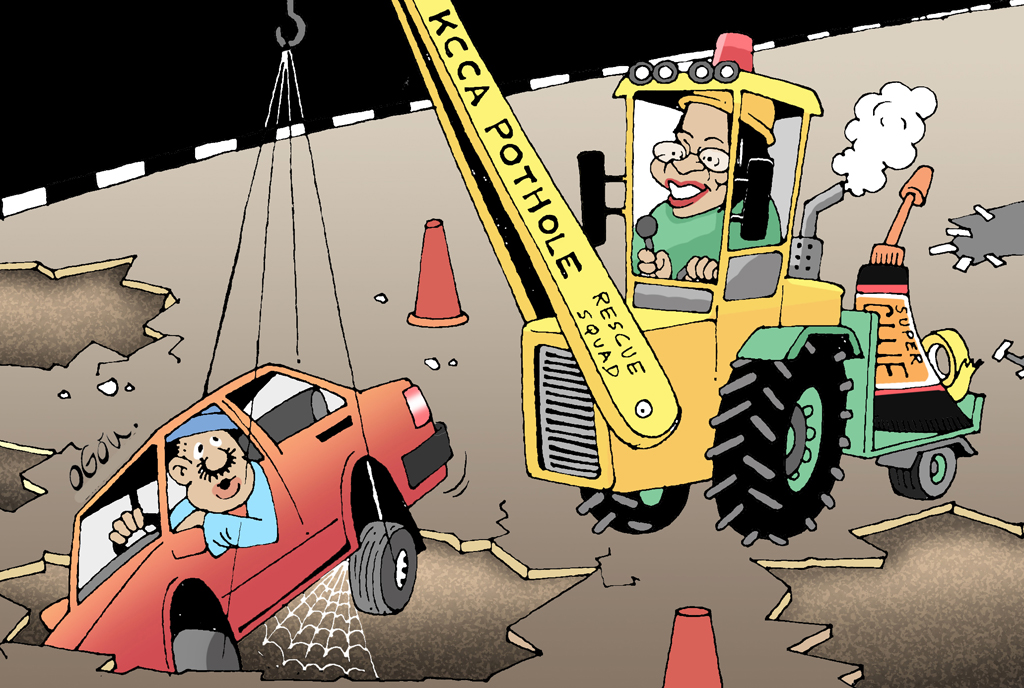 For some problems, we learn to laugh them off. ..

Dramatic UG: On June 3, Ugandans will gather at Namugongo in remembrance of the Uganda Martyrs.  These young men who gave up their lives for their faith. Today, living in Uganda has become an act of martyrdom. To be Ugandan is an act of sacrifice. To live in Uganda, is to risk everything. That is why in Uganda, we all adopt humour as a coping mechanism. Without humour, Ugandans would be committing suicide in droves.

In Uganda, one must learn to deal with their problems as they come, aka kagwirawo. If you attempt to plan for your problems in Uganda, life may overwhelm you. You can be certain that as a country, we are not about to run out of problems. We create as many as we attempt to solve. For some problems, we learn to laugh them off.

If potholes were a marriage partner, then they have been Uganda’s most loyal romantic partner. In Uganda, everyone owns a pothole. If the gods one day decide to convert every pothole into money, Uganda would be the richest country on earth.

You think of the mighty potholes along the MUBS road, you think of those on Salaama Road. Our potholes even have names. The one at MUBS is called Pothole Natasha; it swallows all cars, from a Vitz to Subarus. When you get to Salaama Road, it is not a question of how many potholes you can find, there is more pothole than road. If your car has not suffered from suspension issues, if your mechanic has not talked about bush bearings, then you are not a Ugandan. For all we know, you could be some alien species.

Back in the day, marriage was cheap, bachelorhood was expensive. Today, the reverse is true. It is cheaper to be single than to get married. Ugandans must suffer from some form of inferiority syndrome. Otherwise, why would two young people, with no house to their name, spend millions just to tell the whole world that they have now become one?

In Uganda today, we have more massage parlours than hospitals. Commitment has become expensive, laissez-faire is the cheapest route. Do not ask us what goes on in the massage parlours. If massage parlours were the measure of ease of doing business, no country would beat Uganda on all the index scores. If you are a Ugandan and you are not in three wedding groups, you must check your life. If you are a Ugandan and you have not been asked to pledge to some wedding ceremony, you need the services of the avenger. In Uganda, everything is a trap. If you do not get married, we shall force you to fund the life of those getting married. Doomed if you do, doomed if you do not.

Life was once peaceful on the Twitter streets. There was banter, there was intellectual discourse, then, the Avenger happened. The rest is history. If there was a competition to predict the avenger’s new low, there would be no winner. You just cannot preempt the avenger. The avenger can move from history to physics to political economy to foreign policy.

Fear not, Uganda will always overwhelm you with scandals, to the extent that scandals become normal. And normal life begins to look scandalous. To be normal in Uganda today is to be defiant. Back then, the social deviants were the ones who were engaged in corruption, bribery and all forms of fraud. In Uganda today, to be a social deviant is to choose not to be greedy, to choose to be transparent.

One day we were dealing with a rare coffee deal. In the same week, the Lubowa hospital incident happened. As we were exhausting the Lubowa hospital, the birthdays happened. It is only in Uganda where a 48-year-old’s birthday feast became a national event. As we dealt with that, a ghost lent money to one of Uganda’s richest men. Imagine that for a second, in Uganda, our ancestors appear out of nowhere and grant one a loan. Before we knew it, another rich man based on reason and reality was able to buy land that was nowhere. It stood somewhere between water and land.

Can you imagine the mind of a Ugandan having to process all these scandals every day? This is beyond mental martyrdom. Citizens in other countries are debating the future of money, whether to go crypto or not, they are debating the existence of 11 dimensions based on string theory, they are debating gene editing. In Uganda, we are still figuring out the possibility of a ghost lending a human being money to the tune of $10m.

It is now a crime to be alive. Everything that pertains to living has raised its bar. In Uganda today, living has become an act of courage. In Uganda, everything is a sacrifice. If you choose to drive, you must sacrifice some part of your life just to afford this act. If you choose to walk, forget about any pedestrian walkways. If you choose to use a boda boda, you are still doomed. In Uganda, it is an option between different kinds of hell. The more money you have, the merrier your hell, but it is still hell at the end of the day. For even a rich person in Uganda cannot trust whether it is the money that is loved or people are genuinely in love with him. There is a price for everything in Uganda. We are all martyrs! Mwanga and Mukanjanga have reincarnated in all forms.