Grammys night: Tributes, digs and a Ukraine moment, but no slaps 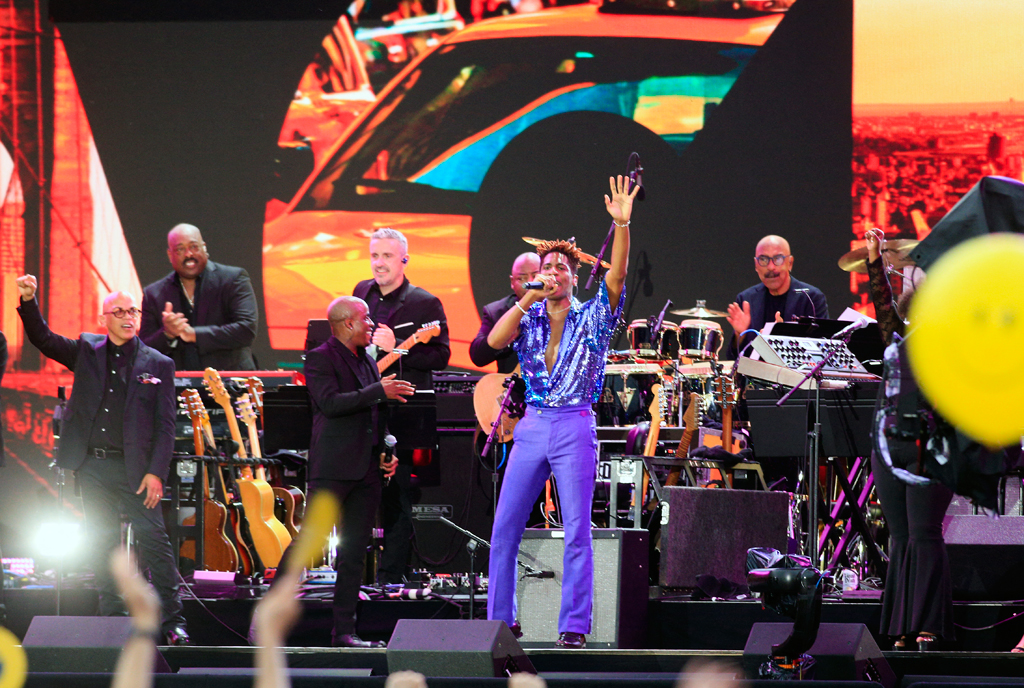 In this file photo taken on August 21, 2021 Jon Batiste performs during the “We Love NYC: The Homecoming Concert” in Central Park in New York City. PHOTO | AFP

Las Vegas hosting the Grammys for the first time ever might have been an opportunity to the music world to scintillate — but the 64th edition of the industry’s most prestigious awards stayed relatively zipped up.

Here’s a look at some of the night’s key moments — which happily did not include any unscripted scuffles.

Too soon for Will Smith jokes? Nope.

Grammys host Trevor Noah, presenter Questlove and others involved with the day’s events in Sin City managed to get a few digs in at the actor-rapper — a past Grammy winner himself — over his Oscars night slap of comedian Chris Rock.

Comedian Nate Bargatze cracked the first joke at the Oscars’ expense, appearing onstage during the pre-gala ceremony at which most of the awards were doled out.

“They said comedians have to wear these now at awards shows, during their joke parts,” he said, sporting a giant helmet.

“We’re going to be keeping people’s names out of our mouths,” Noah said at the start of the show, a reference to the expletive-laden tirade Smith shouted at Rock over his joke about Smith’s wife Jada.

Musician Questlove, who received his Oscar for best documentary in the immediate aftermath of the shocking fracas, later came out to present a Grammy, and quipped: “I am going to present this award and I trust that you people will stay 500 feet away from me.”

The night held a somber moment in support of Ukraine, with President Volodymyr Zelensky making a surprise appearance in a pre-taped video urging the industry’s top artists to “fill the silence” left by Russia’s invasion with music.

Zelensky delivered his pre-taped message ahead of a performance from John Legend of the song “Free,” joined by Ukrainian singer Mika Newton, musician Siuzanna Iglidan and poet Lyuba Yakimchuk.

“What is more opposite to music? The silence of ruined cities and killed people,” Zelensky said.

“Our musicians wear body armor instead of tuxedos. They sing to the wounded in hospitals — even to those who can’t hear them. But the music will break through anyway.”

“On our land, we are fighting Russia, which brings horrible silence with its bombs,” he continued. “The dead silence. Fill the silence with your music, fill it today to tell our story.”

His appearance on music’s biggest night in the United States comes as global outrage at accusations of Russian war crimes in Ukraine mounts, with the discovery of mass graves and corpses in towns near Kyiv.

It was one of Grammy history’s more subdued nights of performance in recent memory — but the setlist did not disappoint.

Billie Eilish paid quiet homage to the late Taylor Hawkins, the Foo Fighters drummer who died unexpectedly, by wearing a shirt with his likeness as she staged a stormy rendition of “Happier Than Ever.”

With her brother and creative partner Finneas on guitar, she delivered a powerful performance backed by lightning bolt strikes and a finale of pouring rain.

Olivia Rodrigo hit the stage in a full 90s get-up of fishnets, platform boots and a white slip dress with tiered ruffle skirt, singing the breakup ballad “drivers license” on a set made to look like a dark, stormy suburban street.

Lil Nas X opened a medley of his hits in sparkling monk robes backed by a drum line, as news reports and tweets critical of his work flashed behind him.

He then busted into a dance-heavy celebration of queerness before guest star Jack Harlow joined him for “Industry Baby,” offering a few sexual gestures that can’t be described elegantly, but which had the audience in giggles.

BTS failed yet again to take home a Grammy but their performance of “Butter” has serious James Bond and “Matrix” vibes.

And it set social media alight after opening with band member V flirting with Rodrigo and whispering in her ear, in a clearly staged but playful moment.

Batiste had the audience on their feet, with a genre-spanning musical effort that showcased the versatility that made him the night’s most nominated  artist and the big winner.

And Lady Gaga channeled Liza Minnelli during an emotional performance of standards off her duet album with legendary crooner Tony Bennett, after the 95-year-old crooner introduced her via video.

He was unable to attend due to his battle with Alzheimer’s disease.

Every Grammys night offers a “in memoriam” tribute to those in the industry who have died over the past year.

This year, it opened with a video montage in honor of Hawkins, who died while on tour with the Foo Fighters in Colombia.

Then, Broadway stars Ben Platt, Cynthia Erivo and Leslie Odom Jr — all Tony winners — were joined by “West Side Story” star Rachel Zegler for a soaring medley of songs from the late Stephen Sondheim, ending with “Somewhere” from the iconic musical.