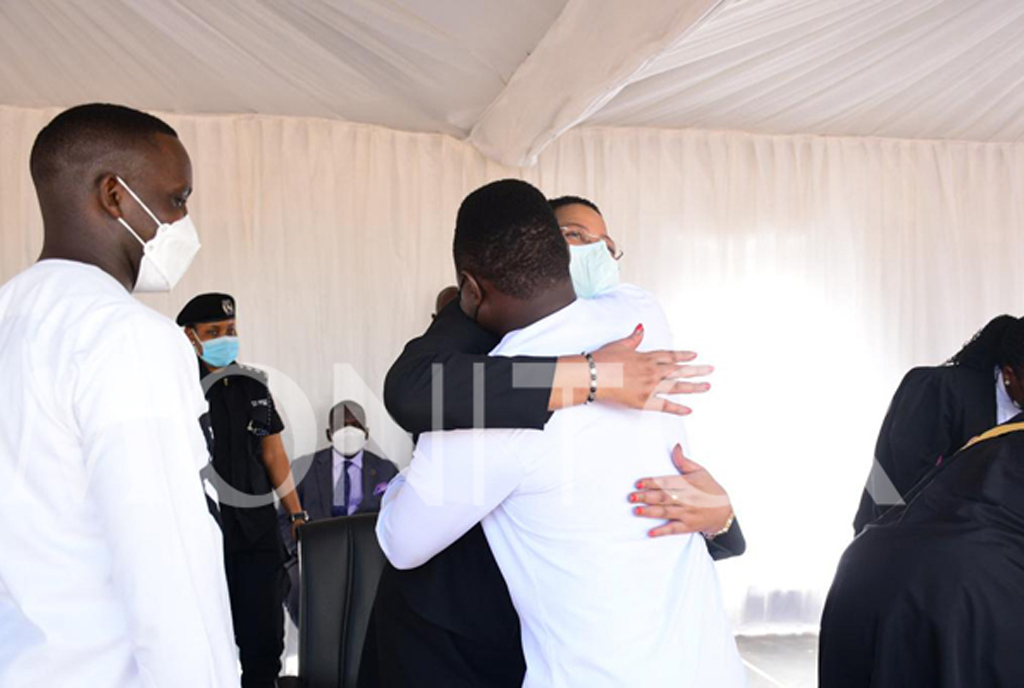 A meeting of Mityana elders ended in solemn prayers at the weekend as a pastor was called to lead in intercession for MP Francis Zaake’s safety.

The meeting was called after elders from the perpetually molested legislator’s clan expressed fears that their son’s troubles with batons and teargas could multiply tenfold.

The fears, sources say, rained after Zaake was pictured having the moment of his life with newly-elected Speaker Anita Among.

The Mityana legislator, who has attracted many jokes over his repeated beatings at the hands of security operatives, was last week pictured embracing Among in apparent conciliatory gesture.

Zaake’s troubles with security operatives have been suggestively linked to his closeness to former minister Aidah Nantaba and now adding the Among embrace left  Mityana elders fearing their son would be fed to a toothless crocodile just to teach him a living lesson.

I didn’t chicken out of Speaker race – minister

A minister has said she did not chicken out after picking forms to contest for the Speaker of Parliament seat but bowed to certain emotions of their juniors.  The minister last week picked forms to contest and was expected to resign from their ministerial job a day but instead beat a hasty U-turn.

“I am a human being and I get emotional, so when I arrived at the office, I found everyone crying,” the minister said, adding that at first they thought people were mourning the late Jacob Oulanyah but were stunned into submission on realisation that they were crying over their impending resignation.

“I joined them in crying. Some were knocking their heads against the wall and I almost did the same but the PS restrained me. Then I asked myself, is it worth the tears?”

The minister said some staff had vowed to cry everyday.  “I had to give in.”

Television show host Faridah Nakazibwe has praised Michael Wawuyo Jr for his acting talent after the two posed for a photo that ended up revealing.  Nakazibwe said after the Mwasuze Mutya interview on Spark TV, she had come out of the studio with Wawuyo and challenged the actor to show his talent.

“I thought he was being shy when he said I will see the talent in the photo and did not realise he meant his testosterone hormones as a talent,” she said.

Wawuyo said as an actor, he wanted the photo to leave an impression but that doing the usual mundane things such as holding a woman, was not his style.

“My acting is unique,” he said in defence of the photo that has him pocketing to conceal a Russian weapon trained at Ukrainian capital Kyiv.