Varanasi: Where serving meat is forbidden 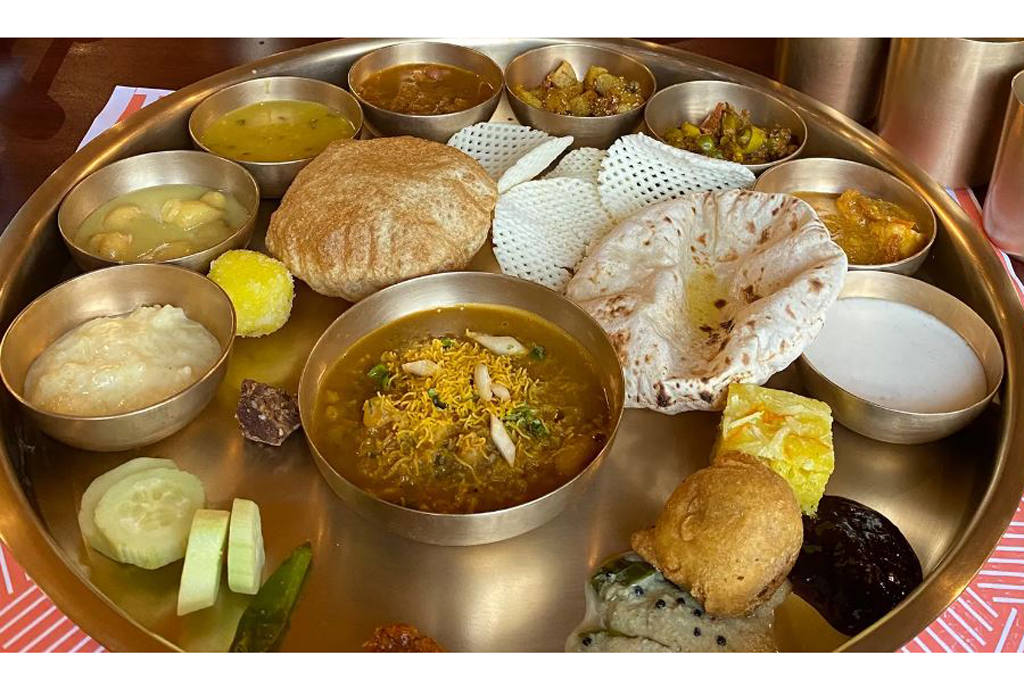 Inhabited since at least 1800 BC, Varanasi is well known for being among the oldest living cities on earth, and one of the holiest for the world’s estimated 1.2 billion Hindus. Every day, as the sound of ringing temple bells echo overhead, thousands of devotees descend the city’s 88 stone ghat steps and dip themselves into the Ganges river to wash away their sins. Bereaved relatives flock to Varanasi’s two cremation grounds where funeral pyres burn around the clock, believing that Shiva himself whispers the Tarak mantra (chant of liberation) into the ears of all those cremated here, granting them instant salvation.

However, my reasons for travelling to Varanasi were quite different. I didn’t come to confront death or cleanse my soul; I came to experience the city’s unique vegetarian food.

Driving through the city’s busy streets, Rakesh Giri, chauffeur and raconteur par excellence, told me how Shiva, the destroyer of the universe, had founded Varanasi in the days of yore, according to Hindu belief. Like most Varanasi residents, Giri is a fervent Shaivite (Shiva worshipper). And since followers of Shiva believe he is a vegetarian God, he and most other Varanasi residents follow a strict sattvic (“pure vegetarian”) diet.
“My family and I have been pure vegetarians for generations. We refuse to even drink water in a home where eggs are consumed,” Giri said as he dropped me off.

Varanasi may be India’s spiritual capital, but it isn’t exactly known for luring culinary pilgrims. Most food travellers will likely flock to the country’s famous epicurean hubs of Delhi, Kolkata or Chennai before making their way to Varanasi. Yet, chefs from around the world are starting to draw inspiration from its culinary heritage, recreating its flavours.

Chef Vikas Khanna, who received a Michelin star each year from 2011 to 2016 when he ran Junoon in Manhattan, said he was bowled over by the vrat ke kuttu buckwheat-flour pancakes served in a single Varanasi temple. “I’ve tried my best to recreate it in my kitchen at Manhattan. It tastes heavenly,” Khanna told Lonely Planet in 2020.

Two-time Michelin-starred chef Atul Kochhar named his modern Indian restaurant in London Benares (the name of Varanasi during British rule). In his eponymous cookbook, the chef showcases vegetarian fusion recipes, such as chickpea pancakes and heritage tomato salad, that highlight the sweet-and-tart flavour combinations commonly found in the city. Even Indian celebrity chef Sanjeev Kapoor has written about his fondness for Varanasi food, highlighting its excellent vegetarian offerings.

Of course, in a country that is 80 per cent Hindu and 20 per cent vegetarian, meatless options are ubiquitous in India. But what makes Varanasi’s vegetarian cuisine so interesting is how its sattvic and vegetarian specialties are directly influenced by its strong sense of spirituality. A sattvic menu is based on Ayurvedic principles and adheres to the strictest standards of vegetarianism prescribed by the Sanatana dharma, an absolute form of Hinduism. As such, it forbids the use of onion and garlic in cooking, which are believed to increase anger, aggression and anxiety, among other things.

Almost every Hindu household in Varanasi has an altar dedicated to Shiva in the house. Eating meat at home is unthinkable,” explained Abhishek Shukla, a shastri (priest) at Varanasi’s famous Kashi Vishwanath temple. “Staying sattvic is a priority for those who wish to attain salvation because we believe that our souls would suffer like those we killed for food otherwise. Meat, onions and garlic exacerbate tamasic (the opposite of sattvic) tendencies, making it difficult for people to concentrate and exercise good judgement.”

Changing things
Traditionally, many Varanasi restaurants have served meat to cater to Western tourists and non-vegetarian Hindu pilgrims, and local sattvic cuisine was primarily eaten at home. But in 2019, the Hindu-nationalist BJP government banned the sale and consumption of meat within a 250m radius of all Varanasi temples and heritage sites. This encouraged restaurants to start featuring local vegetarian and sattvic recipes that have been passed down for generations within Varanasi homes but were previously unavailable to visitors.

Inside the luxury hotel BrijRama Palace, an imposing sandstone structure on the Ganges at Munshi Ghat, executive chef Manoj Verma applies his encyclopaedic knowledge of traditional textbook vegetarian Varanasi cooking. “When I first took over the kitchen, I immediately included dishes like khatta meetha kaddu (sweet and sour pumpkin) and nimona (spiced mashed peas) on our menu,” Verma said. “These are humble dishes that our guests would have never had the opportunity to taste otherwise,” he added. 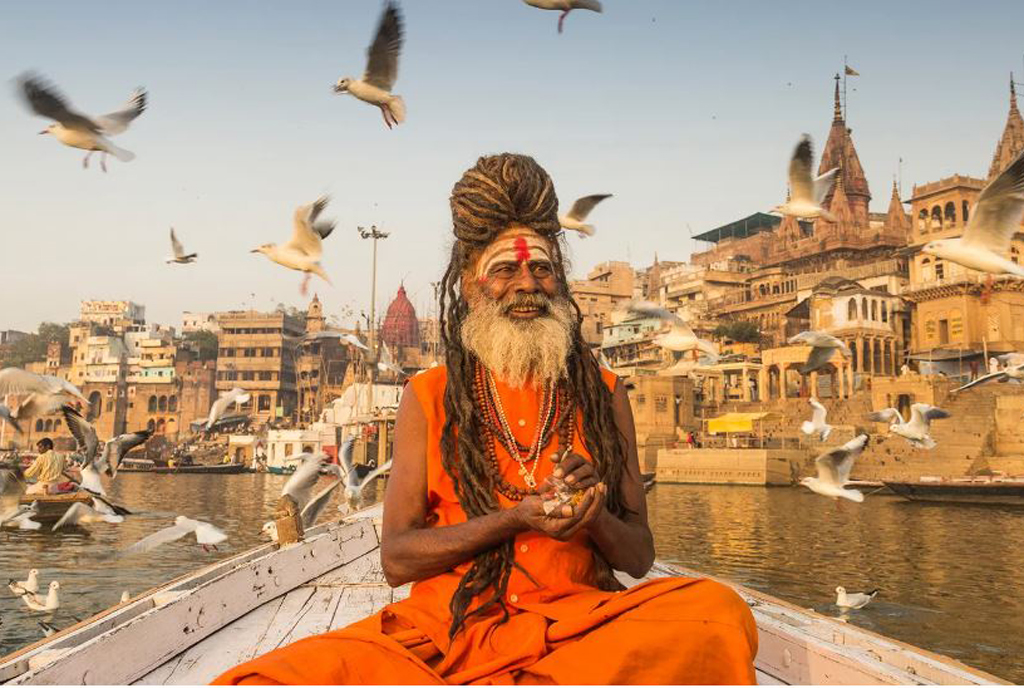 Verma demonstrated how he prepares nimona, reducing a green pea purée in a pan, adding boiled potatoes and pouring over a mixture of fragrant spices such as whole cumin seeds, asafoetida and green chillies tempered in hot oil. Served with a dollop of ghee over steamed basmati rice, the creamy sweetness of the peas and the contrasting bite from the potatoes is essentially Varanasi’s answer to Italy’s cucina povera, in which local “peasant” foods are being elevated by innovative chefs.

Verma indicated that the 2019 meat ban has fostered creativity among a new generation of chefs in Varanasi. Although he had fed his share of celebrity Indian and international guests, his greatest honour came when chef Khanna came to taste his food. In what is considered to be the ultimate mark of respect in Indian culture, the Michelin-starred chef bent down and touched Verma’s feet. “It was in the midst of other diners at my restaurant. I will never forget it,” Verma said.

Across town, Shree Shivay is one of a growing number of restaurants serving local sattvic recipes. Today, locals estimate are anywhere from 40 to 200 sattvic restaurants in Varanasi, a huge jump since the 2019 meat ban. The restaurant’s menu, which changes twice a day based on what is available at the local market that morning, features thalis, or set offerings, with at least 12 different dishes. After months of careful experimentation, the restaurant’s three chefs came up with a formula where they could mimic the taste of any sauce or gravy using five key ingredients: cashews, poppy seeds, melon seeds, tomatoes and chironji (a nutty seed endemic to northern India).

My thalifeatured items like kadhi pakora (fried chickpea flour dumplings in yoghurt sauce), rajma (red kidney beans in tomato gravy) and paneer (Indian cottage cheese). The flavour of roasted chickpea flour in the kadhi, the viscosity of the rajmasauce and the freshness of the paneer were unlike anything I had experienced across northern India.

Beyond its restaurants, Varanasi’s street food scene is as vibrant and electric as that of Bangkok or Istanbul but enjoys none of the media hype. Although many of the sattvic foods sold are unique or inventive variations of snacks found elsewhere in India, they do not benefit from the hype of Delhi’s chaat (savoury snack combining several textures and flavours) or Mumbai’s vada pav (potato burger).

Across town, the chief attraction at Varanasi’s Baati Chokha restaurant is baati,a hard, unleavened wheat bread and a typical food in the surrounding state of Uttar Pradesh that’s baked on dried cow dung cakes. In fact, as diners enter, they are greeted by the sight of dried cow dung cakes stacked up to the ceiling in an outdoor shed.

The restaurant does everything in-house, from pounding their spices in stone mills to grinding the flour for the baati. The vegetables for the accompanying chokha made with eggplant, potatoes and tomatoes, are also roasted on top of the same dung cakes, before simmering in a spice mix in clay pots.

Local guide, Manjeet Sahani, who frequently takes visitors to the restaurant, said, “Initially, I thought that the sight of cow dung cakes might put people off. Honestly, most people I bring here tell me that this is the best food they have ever eaten in India.”

Most Indians know that Varanasi is the capital of paan (betel leaf), and I was not going to leave Varanasi without having tried one. Paan is usually enjoyed at the end of a meal as it aids in digestion and functions as a breath freshener. At the Netaji Paan Bhandar stall, the original founder’s grandson and the current owner, Pavan Chaurasiya, layered rose petal jam, areca nuts and slaked lime on the fresh betel leaf before folding it with origami-like precision and presenting it to me on a silver tray. On the countertop lay a laminated newspaper clipping showing when India’s former prime minister, Indira Gandhi, visited their shop in 1976. I could not have asked for a more fitting end to my vegetarian Varanasi pilgrimage than the lingering sweetness of this long-beloved paan.

Millions of visitors come to Varanasi every year during non-pandemic times, and the Indian government recently announced that it will start issuing visas to international travellers starting this November. While most may come looking for spiritual salvation, this culinary pilgrim came away enlightened by this vegetarian heaven.