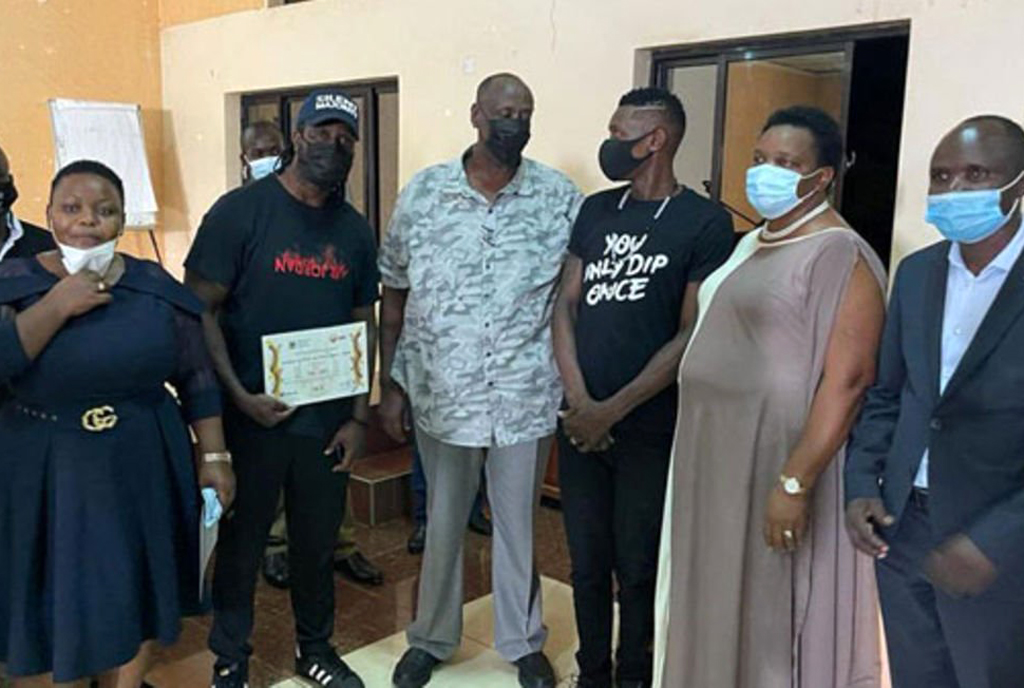 The general has made several well-documented interventions for the benefit of key stakeholders in the creative arts through the Operation Wealth Creation (OWC) programme that he oversees as chief coordinator. One such move was the Gulu retreat in July, focused on ‘strengthening the cultural and creative industry in Uganda’.

The participants were awarded attendance certificates at the end of the retreat.
Regrettably, the caring military general and Luweero Bush War veteran, codenamed chief government listener, has fallen prey to crafty plots of a few individuals and entities in the creative arts industry.

This clique is bent on milking the industry and giving back a mere pittance, and have no long-term objective of guaranteeing prosperity of the artistes.

One such questionable entity is the Uganda Performing Rights Society (UPRS), a company limited by guarantee, which from the onset, has been managed by an inner circle, who have barely served their true demographic but have often courted, used and taken advantage of less enlightened or sometimes only semi-literate hit makers to sustain their selfish agenda.

Misconception
Listening to a Bebe Cool report on NBS’s Uncut Sabula recently, one could not help but notice that Ugandan performers, including the legend of creative arts himself, had spent the better part of their Gulu retreat feeding on falsehoods perpetrated by agents of UPRS, who misleadingly claimed to be the only legal entity required to collect royalties of musical works on behalf of all stakeholders in the music industry.

The law states, in part, that only one licensing agency is mandated to manage a specific bundle or set of rights associated with any given artisan sector, a phrase that is amateurishly understood by UPRS to refer to a monopoly of management, which is false.

That means, as per the copyright law, there is to be no other copyright collective that can be mandated to manage the performing rights of songwriters and audio-producers apart from UPRS, whose bundle of rights encompasses those two groups of musical artisans.

But the music industry does not start and end with authors and composers alone, there are other stakeholders, including performers, promoters and talent managers. As things stand, there’s no collecting society that manages the performing rights of artisan works on behalf of performers and record companies, and it would not be a violation of the law if the Uganda Musicians Association (UMA) took on the legal mandate to collect royalties or issue performing licences on behalf of artistes, talent managers and promoters.

Winnie Nwagi’s ‘Musaawo’ project
For instance, let’s take a look at Winnie Nwagi’s breakthrough hit song, Musawo. It was written by Dokta Brian, produced by Danz Kumapeesa, performed by Winnie Nwagi, and was promoted by Swangz Avenue, a record company that serves as the management arm of the entire Musawo project.

In this scenario, UPRS is the only entity legally mandated to collect royalties on behalf of Dokta Brian and Danz Kumapeesa. That leaves Winnie Nwagi and Swangz Avenue with no royalties to legally claim from the collecting society because they are neither the author nor the composer of the song Musawo. For that reason, there’s a dire need for a second entity to legally collect royalties on behalf of Winnie Nwagi and Swangz Avenue, a role that can rightfully be played by UMA, but is now illegitimately played by UPRS.

Therefore, UPRS’ repeatedly aired claim that they also manage the performance rights of performers and record companies is a false narrative with no legal basis and would be prohibited under the copyright law. Probably, the only reason they insist on ‘tying themselves on artistes’ is because they narrow-mindedly look at such a move as the only way they can meaningfully gain legitimacy from the masses and their would-be licencees.

They incorrectly think it would be very problematic for them to trade as an entity that manages the performing rights of songwriters and audio-producers given Uganda’s current music structure, so they have to cling onto the coattails of renowned artisan stars, the majority of whom neither write nor compose the songs they perform and, or promote.

Misdirection of funds
Consequently, the collecting society has for years misdirected funds that belong to its true members, the songwriters and audio-producers, and given the bigger chunks to performers and record companies, a demographic they do not legally but deceitfully represent.

If artistes blindly permit UPRS to continue hoodwinking them into thinking it is serving their agenda, they may wake up five to 10 years from now with nothing to look backward to with pride, and nothing to look forward to with hope.
It will simply take a smart lawyer to lawfully team up with already disgruntled songwriters and audio-producers then drag UPRS, Uganda Registration Services Bureau (URSB), and other enablers to court over the misappropriation and misallocation of their royalties, the penalty of which will unfathomably be crumbling.

The music superstars have to wake up and fight with all their might for the soul of their stake in the music industry. They must support the idea of UMA officially acquiring the mandate to act legally as their copyright collective and ditch the UPRS bandwagon.

For now, them blindly accepting UPRS as their licensing agency whose legal mandate is circumscribed to serving songwriters and audio-producers will render their chanced time with the philanthropic four-star general a lost cause as they can now only lay claim to byoya bya nswa [empty].

The law
General provisions relating to collecting societies
57. Collecting Societies to be registered
(1) No collecting society shall operate in Uganda without a registration certificate issued by the Registrar of Companies.
(2) The Registrar of Companies shall not register another society in respect of the same bundle of rights and category of works if there exists another society that has already been licensed and functions to the satisfaction of its members.
(3) Any person operating as a collecting society or causing any society or body to operate as a collecting society without a registration certificate commits an offence and is liable on conviction to a fine not exceeding one hundred currency points or to a term of imprisonment not exceeding two years or to both the fine and imprisonment.

Uganda Performing Right Society (UPRS) is a society that was formed in 1985 by authors (mainly musicians) to advance the cause of copyright administration in Uganda. It is registered with the Registrar of Companies as a company limited by guarantee, having no share capital, in other words it belongs to all of its members.

UPRS is recognised by the government as a collecting society and it is a member of the Confederation of International Societies of Authors and Composers (CISAC).

*The writer is a copyright law scholar and a co-founder of a Youth Empowerment and Talent Development Initiative.