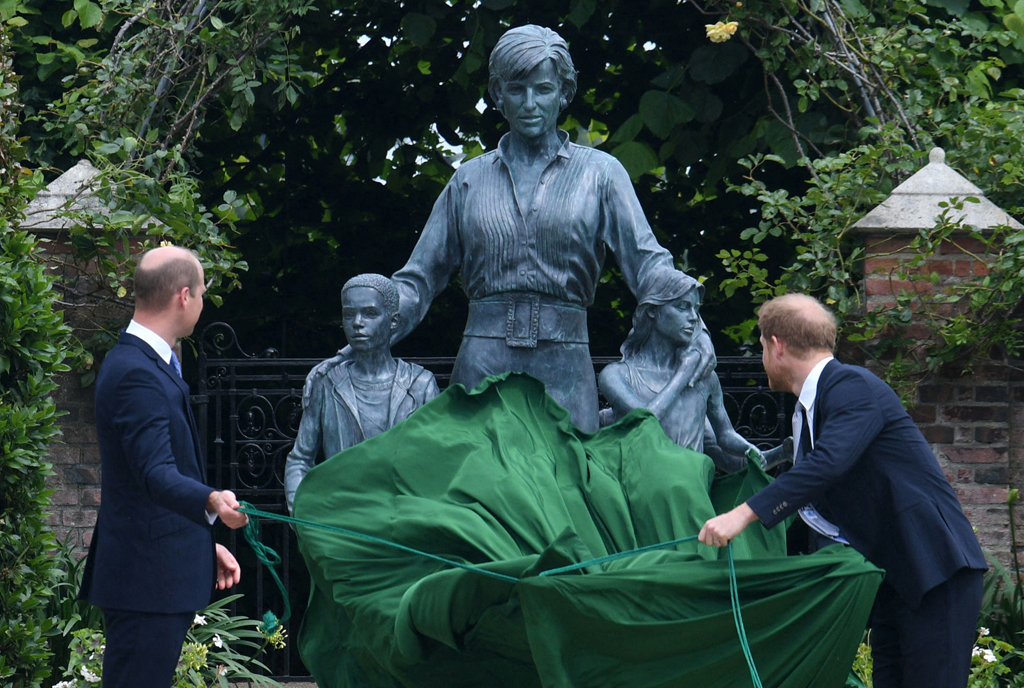 Britain’s Prince William, Duke of Cambridge (L) and Britain’s Prince Harry, Duke of Sussex unveil a statue of their mother, Princess Diana at The Sunken Garden in Kensington Palace, London on July 1, 2021, which would have been her 60th birthday. PHOTO/ AFP

Princes William and Harry set aside their differences on Thursday to unveil a new statue of their mother, Princess Diana, on what would have been her 60th birthday.

The brothers took the wraps off the bronze likeness in the sunken garden of Diana’s former London home at Kensington Palace, in a stripped-back ceremony due to the coronavirus pandemic.

“Today, on what would have been our mother’s 60th birthday, we remember her love, strength and character –- qualities that made her a force for good around the world, changing countless lives for the better,” they said in a statement.

“Every day, we wish she were still with us, and our hope is that this statue will be seen forever as a symbol of her life and her legacy.”

The rare joint statement was a public show of togetherness after strained ties between the brothers since Harry’s wedding to the US former television actress Meghan Markle.

Their once close relationship has visibly soured, amid allegations by Meghan of bullying and the couple’s shock move to the United States, which was followed by claims of royal racism.

William, 39, and Harry, 36, were last seen together at the funeral of their grandmother Queen Elizabeth II’s husband, Prince Philip, after his death in April.

Royal commentators have said their reunion to pay tribute to Diana could be a vital first step in healing the rift, which one biographer called the most serious in generations.

The pared-down ceremony was attended by only a handful of guests, including Diana’s brother, Charles Spencer, and her two sisters, Sarah McCorquodale and Jane Fellowes.

Media attendance was limited, reportedly at the insistence of Harry, who has criticised intrusive reporting and taken legal action against a string of publications.

The brothers — dressed in dark suits — were seen smiling and chatting to guests, including the sculptor, Ian Rank-Broadley, and garden designer Pip Morrison.

The garden has been planted with more than 4,000 flowers, including Diana’s favourite, Forget-me-nots.

The siblings smiled as they took the wraps off the statue of Diana, depicted in the later years of her life, surrounded by three children.

Kensington Palace said it aimed to reflect Diana’s “warmth, elegance and energy”. The children represent “the universality and generational impact” of her work, it added.

Diana died aged 36 in 1997, in a high-speed Paris car crash. She remains an enduring source of fascination.

As young boys, the brothers provided the enduring image from Diana’s funeral, as they walked, heads bowed, behind her coffin past hushed crowds in central London.

When they assumed more royal duties as adults, they shared household staff and frequently appeared together to promote mutual causes, many of which were championed by their mother.

For a time, the brothers and their wives were dubbed “The Fab Four”, seen as modernising the royal family and making it more appealing to a younger generation.

But Harry and Meghan’s departure, their very public claims earlier this year about the suffocating nature of royal life, and personal criticisms, have created bad blood.

Harry had confirmed rumours that he and William had fallen out in a 2019 television interview, revealing that they were “on different paths”.

The former British Army captain has been seen as more impulsive than his elder brother, who is second-in-line to the throne.

Most pointedly, he and Meghan, who is mixed race, accused an unnamed senior royal of racism, claiming the relative had asked what colour skin their unborn son, Archie, would have.

As the royal family promised an investigation, and focus turned to diversity in the palace, William shot back to declare: “We are very much not a racist family.”

At Prince Philip’s funeral, Harry and William were seen talking after the service at Windsor Castle. But there have been little indication since of any thaw in the frosty ties.

Harry, who flew in from California last week, was pictured in British newspapers attending a charity event for sick children on Wednesday.

The Daily Mail also quoted an unnamed royal source as saying the brothers had been in contact about England’s win over Germany in the European football championships.