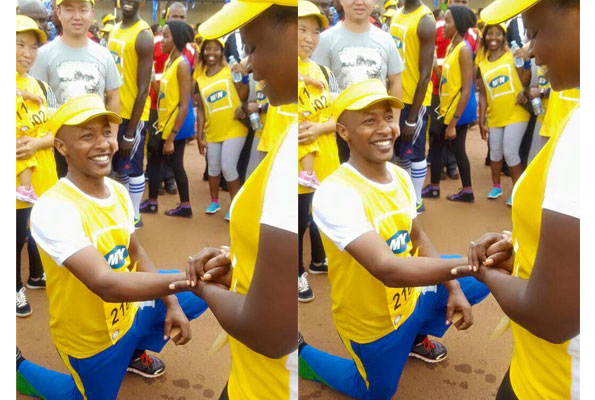 Connie’s tiffs :That guy who proposed at the marathon…

Personally, I first thought Eddy Kenzo’s Sitya Loss was just any other good Ugandan song when it came out. I never thought it was exceptional enough to make Bazungu around the world go nuts or cause a major frenzy worldwide. The impact it had overseas was a shock to many with myself as a chief doubter. The explosion of this song had so much to do with the viral video Eddy Kenzo put out of “ghetto kids” simply dancing to the track. The simplicity, the artistry in that video was what separated it from your average song and gave it the global acclaim.
You wonder how a video so simple could resonate with just about anyone. The message in the video was simple and clear, “it doesn’t matter where you are from, you can still enjoy yourself”. That message was so powerful that everyone regardless of whether they understood Luganda or not got hooked. It is these children that packaged the message so well and sold it to the people. They made everyone stand up and notice Uganda.
They danced, enjoyed themselves and just like that, global stars were born. Alex Sempijja was just one of those stars. A very talented and passionate child whose ticket out of the ghettos was through dance. The journey was starting to look hopeful with this new found fame, new friends, school and basically a new lease of life until tragedy struck early this week. It is always heartbreaking when someone dies young after seeing the loads of potential they had and Alex was such a person. The industry has been robbed of such an immensely young, talented star that illuminated through dance and brought a lot of joy to our lives.
In the wake of his death, a lot of conspiracies have been created by some heartless tabloids but let us ignore all that and try to learn a few things from a life that was suddenly cut short. It does not matter where you are from or what your past says about you, the pen of destiny is in your hands. You can choose to be successful and happy. That power lies within you. Rest in peace Alex.
Let us kindly pray for Patricia, another little girl who was Alex’s group member. She was involved in the same bicycle accident with him but escaped narrowly and is still fighting for her life.