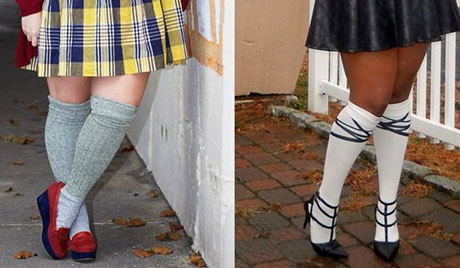 Fashion tip : The knee high socks. Just what you need for the rainy day

The BlackBerry Passport is a pure productivity machine, and emblematic of the company’s professional, business-focused mindset.

Design and specs
The 4.5-inch BlackBerry Passport is about the same size and shape as a US passport. That squat, distinctive square shape will certainly grab everyone’s attention while you’re tapping out missives or holding it up against your face. And at 196 grammes the phone is light, but still feels solid. But it’s also 3.5 inches (89mm) wide, which makes it wider than phablets.

The keyboard
BlackBerry and physical keyboards have gone hand in hand since time immemorial, but the company is switching things up a tad on the Passport. The four-row physical keyboard that might be familiar to fans of the Blackberry q10 is touch-enabled, and it works fairly well.

Software and features
The BlackBerry Passport runs BlackBerry OS 10.3. App selection remains the phone’s Achilles’ heel, but there is a silver lining: you can run quite a few android apps. The Amazon Appstore comes preinstalled, and you can just fire it up and download apps as you would on any Android device.

BlackBerry Assistant
The BlackBerry Passport gets a taste of Siri, Google Now, and Cortana with BlackBerry Assistant. If you’ve used a modern smartphone you’re likely familiar with how it works: just press the dedicated voice assist button and start talking. You can dictate notes, create calendar events or send e-mails to friends, as well as have the phone send text messages.

Performance
BlackBerry did not skimp on the Passport’s hardware. It’s running on a 2.2GHz quad-core Qualcomm Snapdragon 801 CPU coupled with 3GB of RAM, and absolutely flies through most operations.

Camera
The Passport’s photos aren’t bad. The autofocus isn’t too sluggish, and it will attempt to offer suggestions to improve your shots.