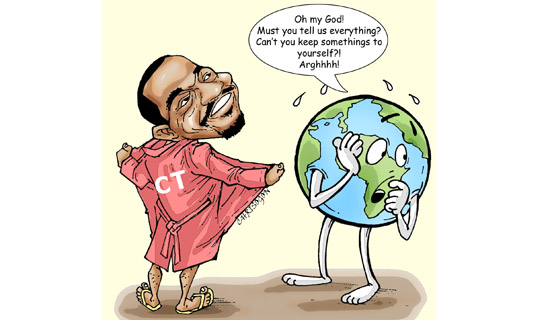 Sometimes it pays to maintain your silence

They say desperate situations call for desperate measures but again this ever increasing theft rate in a bid to earn a living (isn’t that what the thieves say?) is seriously getting to me.

Of late, one can lose anything from the killer ones to the pettiest of stuff within just a day.

Imagine the other day, after my zibs of incurring my own losses (thanks to the desperate measures implemented by some crooks-read- thieves), I had to go through another not so cool chapter.

Some mean looking yet very bold guy walked to a car, parked at one of the slots along jinja Rd and shamelessly started to remove the side mirrors.

The shock took over my senses that I stopped accelerating and instead started to alert those around me so that they could either scare the thief away or better still catch him before any further damage.

I really wanted to help but guess what? From the look of things, I was acting my own movie. No one wanted to know!

The passers-by went on and on about their business while the cars behind me hooted hard to as if to force me to drive off. The people driving cars on the other side who evidently could catch a glimpse of the root cause of this stand still, made fun of the scene as if to say; “Oba where has this one been, and what’s with the fuss?”

Just know I invested all my energy for nada because by the time I was done sweating through the exercise, the thief had gone while the situation took to a new twist that made me look like a fool, given the ka mini traffic jam.

And while I drove off amidst all sorts of comments from those that had seen and ignored this traumatising situation, I could not believe that our society has become used to such atrocities that they have ceased to care. How selfish can people be really?

So we have now reduced everything to that “everyman for himself attitude” and that is just it? This is so absurd.

I think that we need to unite against some of these vices that are eating up this nation as opposed to being too self-centred and just wanting everything to be wrapped up so that life can go on.

That property or person going through that situation could be your very own for crying out loud. So what is so wrong with helping out whenever we can?