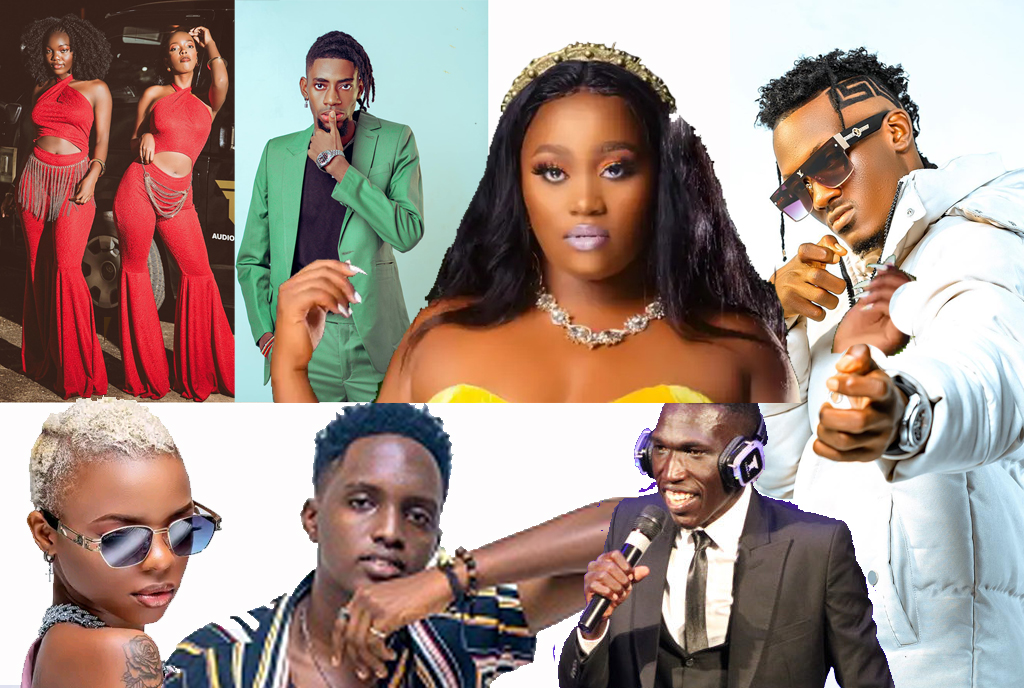 NEW FACES: In 2022 is when some of them met their breakthrough and others were introduced, now we have eyes on them in 2023.

Their Year: 2022 is now in the past but it has been a good year for some people in the entertainment sector. Many comedians and musicians held successful concerts that year and it could be attributed to the fact that it was that year that the industry was fully open after two years of lockdown. Isaac Ssejjombwe looks at the people in the entertainment industry who might have a good year.

In our annual sQoop awards, the singing duo of Hadijah Namakula (Kataleya) and Rebecca Robins Nabatuusa (Kandle) took the breakthrough artistes of the year.

The duo, who started singing in 2017, had 2022 as their best year so far in the industry with songs such as Njagala Money, Nyash, and Hallelujah, among others. They were the outstanding duo last year and we believe they are going to pick up from there this year, of course, with the help of their management group Theron music.

If management could trust them when they were just upcoming, imagine when they have a catalogue of songs and making some money through bookings in the process.

With two EPs, including Baby Steps and Watershed, as well as single Belinda and Sana featuring Merry Lynn, you will notice that he is a talent ready to break out and 2023 might be that year that he breaks out of his shelf.

The 21-year-old is a fast-rising multi-talented Rn’B and afro-pop artiste. He says he also writes, produces and plays different instruments, including a piano and a guitar as well making him a talent of trades.  Baraka says he comes from a musical background as his mother was a worship team leader in church. He learnt how to play different instruments as well as how to sing.

Looking at people such as Maurice Kirya, A Pass, Azawi, Sheebah, Juliana Kanyomozi and especially the late Radio and Elly Wamala, as his inspirations, there are a few chances he will not make it.

Alien Skin’s name came up during our research on who the 2022 sQoop artiste of the year should be. He is not known to many people but those who are familiar with him know how talented he is.

With songs such as Sitya Danger, Kakana,  Gawunya and Mbatisana, which is one of his biggest songs, Alien Skin, real name Patrick Mulwana, is likely to have a fruitful 2023.

During one of his interviews last year, he bragged of inspiring Grenade with his style of music.

“I have inspired artistes such as Grenade. They are copying my style and getting hit songs.” He said this after Grenade came up with Babandana that resembles Mbatisana.  He does ragga and dancehall music but he is a songwriter as well.

Rahma Pinky appeared on this same list last year and we can brag that she is one of the few that managed to do what we expected. Behind a management team such as Team No Sleep, she was destined to have a good year and she surely did, especially with songs such as Picha alongside Grenade, Tukimala and Superstar but her affair with TNS came to an end when they let her go last year but like her predecessor Sheebah Karungi, it is up to her to pick herself up and do music because she has the potential.

After so many years without signing artistes, Steve Jean got back to artiste management last year with Amos Birungi, aka Vamos 256.

They started off the year with a song titled Konkona that did quite well on the charts before they released the remix with Zex Bilangilangi.

Vamos was a constant performer at almost every gig that Fenon worked on and this gave him experience via stage performance and confidence. As the year was coming to an end, they released a third song titled Ayaka, which might actually crossover to this year.

With Steve’s direction and expertise in this industry, Vamos is destined for greatness.

Like Rahma Pinky, An-Known, real name Ntege Dalton, did not disappoint us last year. He lived up to expectations thanks to songs such as Mutima, Burning Fire and Nkumila Omukwano.

The Ugandan Rn’B and contemporary singer, song-writer, guitarist and performer who started doing music in 2019 and later signed with FC Records was our breakthrough artiste in 2021, a year he literally broke out.

“Initially I thought Covid-19 was a curse for me and given the financial situation in my family, I had given up on music and was planning to go to Dubai to work. I planned that perhaps if I were able to save some money, I would invest in the music much later. The lockdown interrupted these plans, but it turned out to be a blessing in disguise. As many were sadly losing their lives, I was being transformed into a successful musician,” he stated earlier in an interview.

With this focus and determination, 2023 is definitely going to be bigger and better for him.

Michael Sebamba, alias Mickeyseems2funny, is one of the biggest Tiktokers in Uganda and earning big from it. Verified with 800K followers on Tiktok and increasing, he will only get better this year.

When he joined Tiktok, Mickey was a LED technician at Fenon and he is now signed to the company as a comedian.

“I would say if you use social media well there is a lot you can achieve,” he says of his TikTok job.  To back up his statement, Mickey says Tiktok has helped him start a furniture business and is also into real estate.

“I have been able to score some major endorsement deals with the popularity of the app, the main ones being with Jobline Ugandan Consultancy and Club beer,” Sebamba said earlier.

Having missed two years without having his Stand-up comedy due to Covid 19, comedian Joshua Okello, alias Okello Okello, went full marathon last year with the event happening every three months at National theatre with the final episode taking place at Theatre Labonita.  All shows were sold out and he will take it up from there this year. He will have about five shows this year and with this consistency 2023 is his for the taking.

One artiste who was on form last year was Grenade. Every song that he released was a hit. From Babandana, Picha, Onkomayo and Nyumilwa among others. He was our male artiste of the year in the sQoop awards and with the focus he had last year, 2023 might be his best. Unlike the previous years when he was allegedly distracted by women, we believe he is now concentrating on his music career more than before.   Real name Deus Nduguwa, Grenade is a pop singer and recently known for songs such as Nkuloga.

Mudra has been a big prospect for the past two years. There have always been signs of him becoming a superstar and last year provided exactly that. He was both our artiste of the year alongside Sheebah and male artiste with Grenade with songs such as Balo Balo and Ayi. Both songs ranked highly on different end of year charts and with this success, Mudra can only blame himself if 2023 does not go his way.

Mudra was famed for writing songs for Karole Kasita until she started doing his own songs. Onkosa, Gwe Amanyi, and Muyayu are some of his previous hits.

Loukman Ali jumped off a Nigerian movie last year. It was the Brotherhood project by Nigerian producer and entrepreneur Jade Obesiru and her production house GREOH Studios. However, the movie emerged as the best-selling box-office hit in Nigeria but word we have is that Loukman Ali did not cry over spilled milk. We have learnt that the director of The Girl in a Yellow Jumper, has an upcoming project with Netflix that will be released this year. This might be the break he needs.

Without a doubt, Carol Nantongo’s Oliwa contends for Song of the year 2022. The artiste outdid herself on this song that different radio stations and personalities considered among the best.

Her first try at solo music with this song worked out and she may resort to doing that style as opposed to band music.

Carol Nantongo was once a Golden Band artiste and her rise to fame came after songs such as Ontuka ft Dr Hilderman and Tukigale with Eddy Yawe.

2022 was not a bad year for DJ Lito as he got his first Afrima nomination in the “Best African DJ” category and “Best Artist Duo or Group in Reggae Ragga Dancehall” for the song Tick Talk.

It was also last year that he was able to get his first endorsement deal to be a brand influencer for Rockshore.

Also known as the ‘Turntable supreme’, DJ Lito real name Shafiq Ssekitoleko, is a big prospect in the deejaying fraternity and rumour has it that he was the most booked deejay last year, getting gigs at places such as Club Guvnor, Exo Lounge, La Paroni’s, Vault, Casablanca Kololo Cat Walk Bar & Lounge, Pier One Ntinda, FAME Lounge and La Teraza among others.

With all this, tell me he is not one to look out for this year.

One of those few artistes who can really sing.

Liam Voice’s big break came in 2021 with songs such as Love Olinonya, Omwoyo, Guma, Bus and Akafananyi and made it on our list last year. He had a decent year with Dear Ex, Kukaliba and Olwanye among others.

We still have high hopes for him this year, especially with the guidance of his godfather in the industry Chagga.