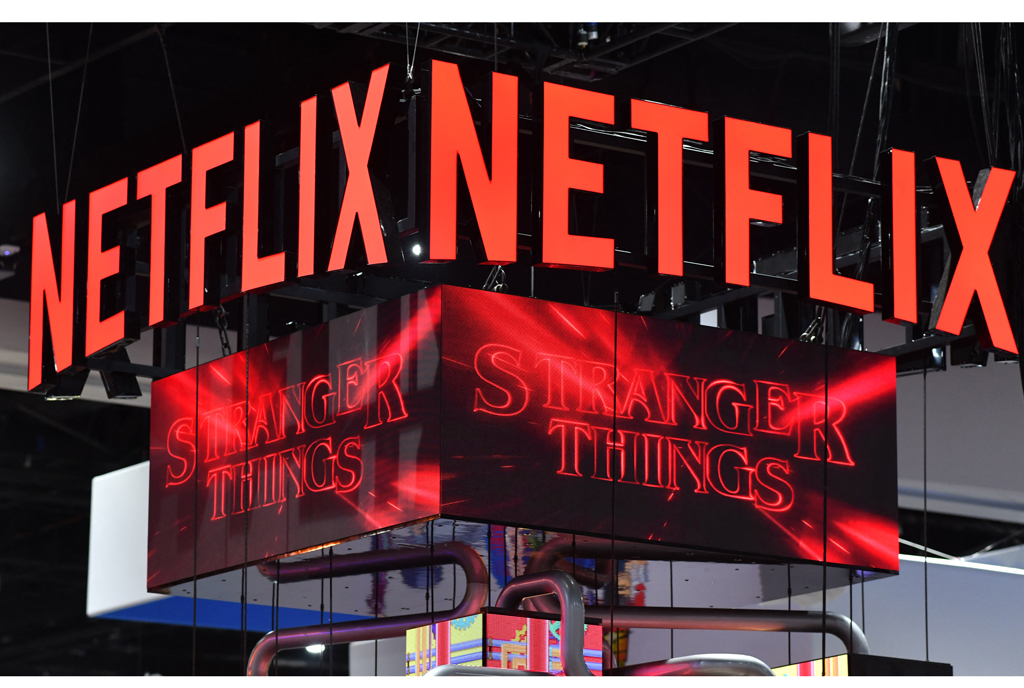 In this file photo taken on July 24, 2022 The Netflix booth advertises “Stranger Things” on a screen during Comic-Con International in San Diego, California. PHOTOS / AFP

Netflix on Tuesday reported that it gained more than 2 million subscribers in the recent quarter, calming investor fears that the streaming television giant was losing paying customers.
Netflix said it ended the quarter with slightly more than 223 million subscribers worldwide, up some 2.4 million, after seeing subscriber ranks ebb during the first half of this year. Netflix shares shot up more than 13 percent on the earnings news.

“After a challenging first half, we believe we’re on a path to reaccelerate growth,” Netflix said in an earnings letter.
“Our competitors are investing heavily to drive subscribers and engagement, but building a large, successful streaming business is hard – we estimate they are all losing money.”
Netflix reported a profit of $1.4 billion on revenue of $7.9 billion in the recent quarter, the company’s net income slightly less than in the same period a year ago when it brought in more money.

The turn-around in subscriber growth comes as Netflix is poised to debut a subscription option subsidized by ads in November across a dozen countries to boost growth.
The new “Basic with Ads” subscriptions will be priced at $6.99 in the United States — three dollars less than a no-ads basic option, Netflix chief operating officer Greg Peters said in a briefing.
“The timing is great because we really are at this pivotal moment in the entertainment industry and evolution of that industry,” Peters said.
“Now streaming has surpassed both broadcast and cable for total TV time in the United States.”

The ad-discounted tier, a first for Netflix, will roll out in Australia, Brazil, Britain, Canada, France, Germany, Italy, Japan, South Korea, Mexico, Spain and the United States.
“We are looking at a very light ad load with no more than four to five minutes of ads per hour, and including some very tight frequency caps so that members don’t see the same ad repeatedly,” Peters said.
After having shunned advertising since it started its streaming service, Netflix acquiesced as competition in the market intensifies and as consumers recoil from soaring inflation.
With the launch of cheaper, ad-supported subscriptions, Netflix and Disney+ are expected to bite into the revenue of traditional television channels.

Netflix rival Disney+ is expected to launch its own ad-subsidized subscription soon.
Peters acknowledged the potential for Netflix subscribers to switch to the lower-priced offering, but said the company expects that to be offset by ad revenue plus an overall increase in the number of subscribers.
Netflix is continuing to invest in shows it believes will attract subscribers.
Peters noted hits such as “Stranger Things” and “Extraordinary Attorney Woo” and pending releases of keenly anticipated films such as “Glass Onion: A Knives Out Mystery.”