Has theatre lived up to its purpose of mirroring society? 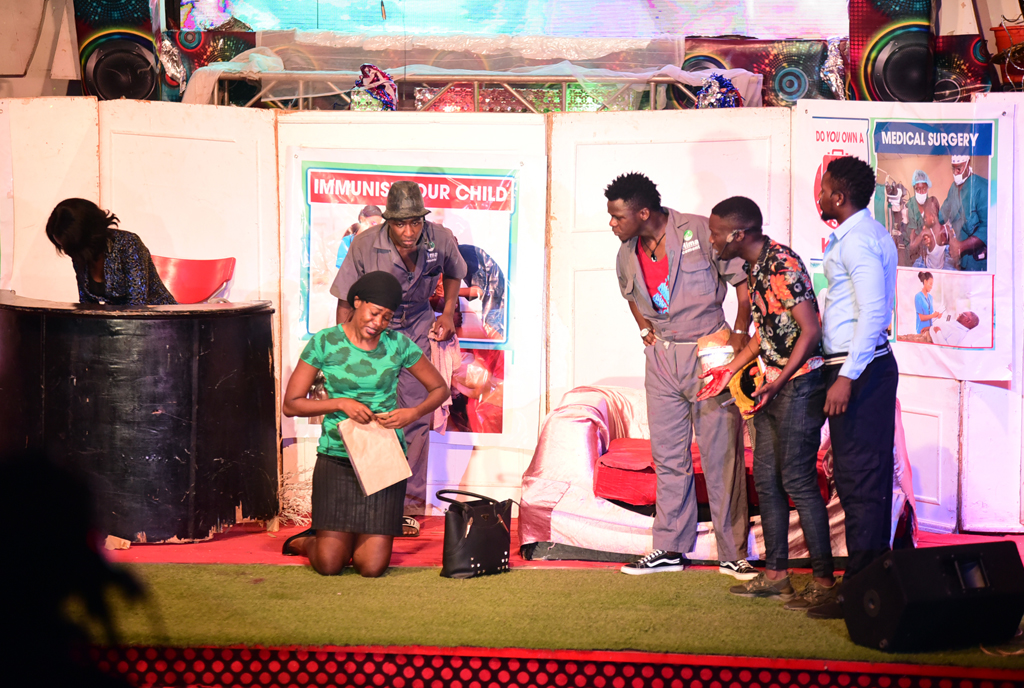 The Ebonies in a scene of one of their theatre productions at Theatre La Bonita. Formed in the 1970s, the theatre outfit is one of Uganda’s oldest and most consistent groups. PHOTOS / EDGAR R. BATTE

Sixty years of Ugandan theatre leaves a bitter-sweet taste, one of the good and ugly days when politics glared both its beautiful and ugly side. Christopher Mukiibi, one of the veteran stage actors and producers, says theatre, right from the 1960s, was a vehicle through which people found entertainment, education, and food for thought.

Performing arts lecturer, stage and screen actor Philip Luswata says theatre has been faithful to the different social transformations Uganda has gone through over the years.

“Immediately after Independence, those fortunate enough to have a voice through theatre created and archived artistically the questions of the time. The likes of Elvania Zirimu came in early with plays like Keeping Up with the Mukasas, interrogating how the newly independent Ugandan was trying to negotiate ‘post-colonial circumstances they were finding themselves in,” he says.

Robert Serumaga then came in to archive the intellectual confusion and post-independence conflicts. During the same time, Makerere University, through Margaret Macpherson, pushed to ensure a consistent flow of new theatrical talent to keep the tradition of creative expression running by practicing with the Makerere University Free Travelling Theatre.

The 1970s revealed the likes of Byron Kawadwa, who questioned the political repressions of the times in Song of Wankoko. The romance and optimism of the times were not lost in plays like Amakula ga Kulabako in which Wassanyi Sserukenya collaborated with Byron Kawadwa.

Alex Mukulu came in the late 1970s to archive the ‘Mafuta Mingi’ psychology ushered in by Idi Amin through his slapstick comedy Muzukula wa Kabangala. Then came the 1980s which saw the rise of Bakayimbira Dramactors and many others, who chose the careful theatre of social rather than overt political commentary.

Luswata says the times didn’t allow for anything deeper, adding that the entry on the scene of the National Resistance Army (NRA) ushered in a new era of revolutionary political expression in theatre represented by the brave efforts of Alex Mukulu in 30 Years of Bananas and many other plays that the new regime tolerated being freely political.

As such, the period of tranquillity ushered in a new class of consumers of leisure, the returnees from abroad, who had ‘change’ to spare and wanted a theatre that reflected their opulence and aspirations, hence the theatrical conversations ushered in by The Ebonies in their plays like The Dollar.

Around the time, the Black Pearls, Afritalent, Diamonds Ensemble, and many others contributed to this fresh dialogue on social aspiration. Then came the behaviour change and community development plays such as Ndiwulira which responded to the needs of the non-government organisation (NGO) fraternity – which many blame for the death of theatre by bringing the stars of theatre freely to the people at village squares and under trees selling messages of HIV/Aids, malaria, hand washing, among others. 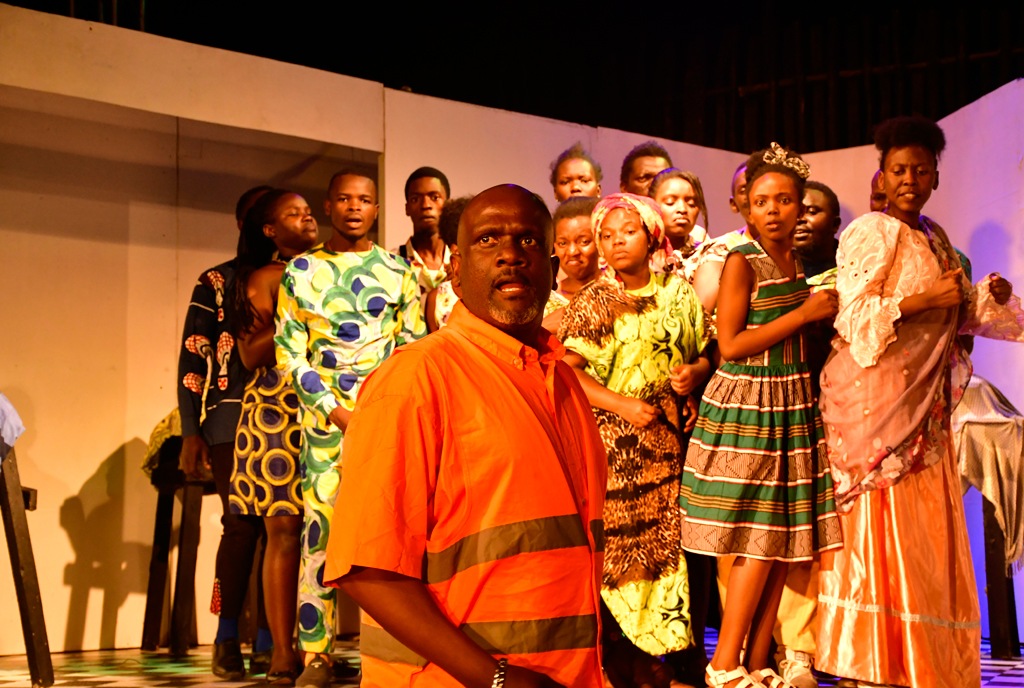 Actor and playwright Philip Luswata in a scene of 30 Years of Bananas at Play House in Mengo, Kampala. He redid the play by veteran actor Alex Mukulu.

The novelty of theatre, many will argue, and as Luswata says, died at this time and was replaced by the efforts of Amalura Family and Theatre Factory, who introduced easy-to-consume sketch and stand-up comedy for the new spenders, the corporate class, who, pursuing deadlines, now had more leisure in the night than in the afternoons and early evenings when the regular theatre is expected to occur.

Up to this point, the study of literature in schools had been compulsory and thus had continued to be a constant flow of citizens empowered towards critical thinking and the beauty in alternative expression offered by art.

Luswata says they thus sought to consume art. With the rendering of literature and the arts as peripheral, optional, and frequently ignored subjects in schools, the masses have become increasingly uncritical, bitter, and less inclined toward consuming critical art.

“As a reaction, theatre artists have sought to go to the stage that continues to offer an opportunity for creative and critical expression – politics. The theatre artist thus continues to contribute to the nation in whichever way they can through the mutations they have gone through in the 60 years of Uganda,” Luswata, a seasoned actor and producer, argues.

In his contribution, playwright John Segawa has felt the effect of being critical of the sitting government. His 2012 play, titled State of the Nation: Kku Girikiti, came hard-hitting to the ruling National Resistance Movement (NRM) for seemingly being ‘ungrateful’ to those that were instrumental in bringing it to power, folks of Luweero District who provided a much-needed meal, a shelter from the Milton Obote security personnel hunting them down, and more.

Ten years later, Segawa would not change his script because nothing has been done and the situation for those upon whom the story rotates, continues to be bad and they cry out to the government for support, and compensation.

“What the script says is that when the so-called freedom frights went to peoples’ villages, they told them they were liberators but what we see today is different. You betrayed the cause,” the playwright says of his stage play, which got banned by the Uganda Media Council (UMC).

The gist of the play is anchored on a disillusioned man whose instrumental role in helping the NRM government key players attain power has been long forgotten as they continue to enjoy the spoils of freedom.

The play is one of the recent plays worth their salt for standing up for what theatre productions are meant to deliver- education, entertainment, and providing food for thought.

Segawa delivers a heavy political dose in the play where his main protagonist, Ddungu, played by Charles James Senkubuge, is a deeply disappointed and disturbed man who sacrificed everything but ended up with nothing.

In him, the playwright and director represent a figurative character from Luweero District, a key place where many families played a key role in what was to become a victory by then NRA rebels as they combed the triangle in pursuit of the cause of liberating Uganda from what they described as bad leadership.

State of the Nation, comprising a cast fusion of leading theatre outfits under the dub Afri-Baka, namely Afri-Talent and Bakayimbira Dramactors, is one of the few last ones that have got tongues wagging because of its punchy message delivery.

And he is hurt that senior playwrights, Alex Mukulu, Charles James Ssenkubuge and Andrew Benon Kibuuka, seem to have taken a back seat or been preoccupied with everything else but theatre, whose role and contribution has died because of the absence of strong plays that ought to shape the narrative in Uganda.

Luswata has recently staged Shame on Your hand, a dramatic representation inspired by the derogatory way in which an unknown public figure reportedly sexually assaulted artiste Sheebah Karungi in May before a performance.

“As a man who grew up at the hands of my mother, I felt really satisfied with the questions I ask in the play. I am also particularly proud of Alex Mukulu’s 30 Years of Bananas, which is why it had always been a challenge to myself to one day stage the show for him to come and watch it,” he says.

The seasoned actor has a keen attachment to Robert Serumaga’s Majangwa which he acted in earlier during his career. He would like the challenge to stage two others of his plays, Amayirikiti and Renga Moi because they intrigue him, and he can’t help but imagine the mental disposition of the man who wrote them as he schemed armed struggle against the regime of Idi Amin, within the country he intended to stage the play.

Mukulu says theatre in its true sense did not thrive during Amin’s time much as numbers show that it was one of the eras where so many theatre groups could be counted from a State that did not seem eager to welcome and let those with dissenting views to have their way.

Indeed, the like of Kawadwa and Kampala City Players who staged plays highlighted and satirically condemned the political repressions of the day were not rewarded with cordiality.

Reports indicate that in 1977, Kawadwa was picked and driven away from Uganda National Cultural Centre and later discovered dead in Namanve, near Mukono. That sent chills within theatre practitioners and the arts fraternity.

The kidnap and death also ignited self-censorship and led to Kawadwa’s group- Kampala City Players, to collapse as no member could risk facing up the State and talking or dramatically communicating about its ills and failures.

Mukiibi, the founder of Kayayu Film Players, became popular for highlighting social issues through plays like Abassa N’abassa, which tackles the moral decadence of older men who shamelessly court girls, young enough to be their daughters.

After a 46-year stage hiatus, he returned to the National Theatre with 1976, which won him an accolade of the year. It was perhaps safer for the passionate actor and playwright, who had cut his teeth into theatre production in 1951.  He says theatre continues to suffer because entities like the National Theatre, which should promote and advocate for standard production, fall short of professional standards, and as Jack Sserunkuuma, an actor and theatre advocate, adds, the present administration has failed to handle artistic productions and artistes.

Mukiibi says government does not appreciate theatre despite its oversight role and delivery of pertinent social education and entertainment role.

Segawa observes that on top of being marginalised, theatre has lost its national appeal with only a handful of groups concentrated in Kampala and some parts of Jinja.

“When we started 25 years ago, there were groups we found like the Bakayimbira Dramactors, Negro Angels, Black Pearls, and others, which were under an organisation called Uganda Theatre Groups Association. They provided entertainment, which was limited at the time. The scripting, dialogue, stage set up, casting and actors were better than what we have today,” Segawa, a founding member of Afritalent theatre outfit and director of Beyond Borders, argues.

Segawa says theatre needs support from NGOs to play its proper role. Otherwise, he would least expect to get support from the government, which is skeptical given the critical nature of theatre in checking it for its failures and shortfalls.

On a scale of 1-10, how does Uganda score on her 60th birthday? I ask. The playwright gives her a measly three, arguing that the Mzungu (British colonialist) left Uganda in a better place than it is today. He shelved a script titled Come back Mzungu but abandoned it, envisaging more State harassment.