Music, confusion and optimism: The making of a festival 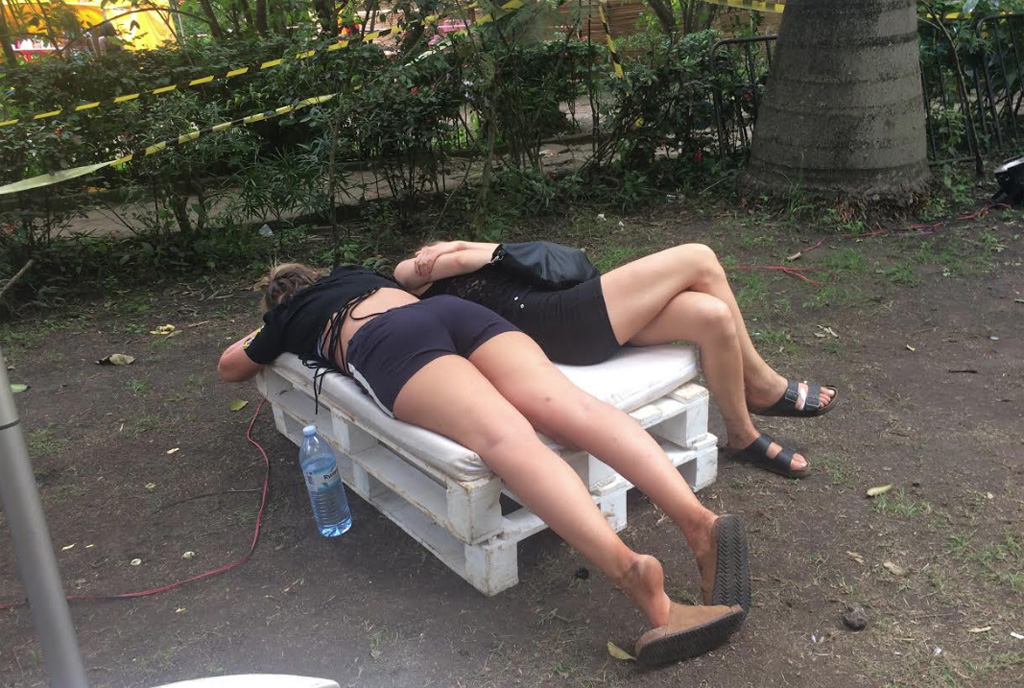 This could have been the feeling of the organisers of the annual Nyege Nyege International Festival when they debuted back in 2015.

“By the time we did the first edition of Nyege Nyege, I had not attended as many festivals,” says Derrick Debru, one of the festival founders.

They knew nothing about festivals or even stage management and yet they had to manage a humongous stage, one that was yet to be graced by more than fifty international artistes.

In fact, he says that all they knew was that they wanted to throw a party and people would come and have a good time. 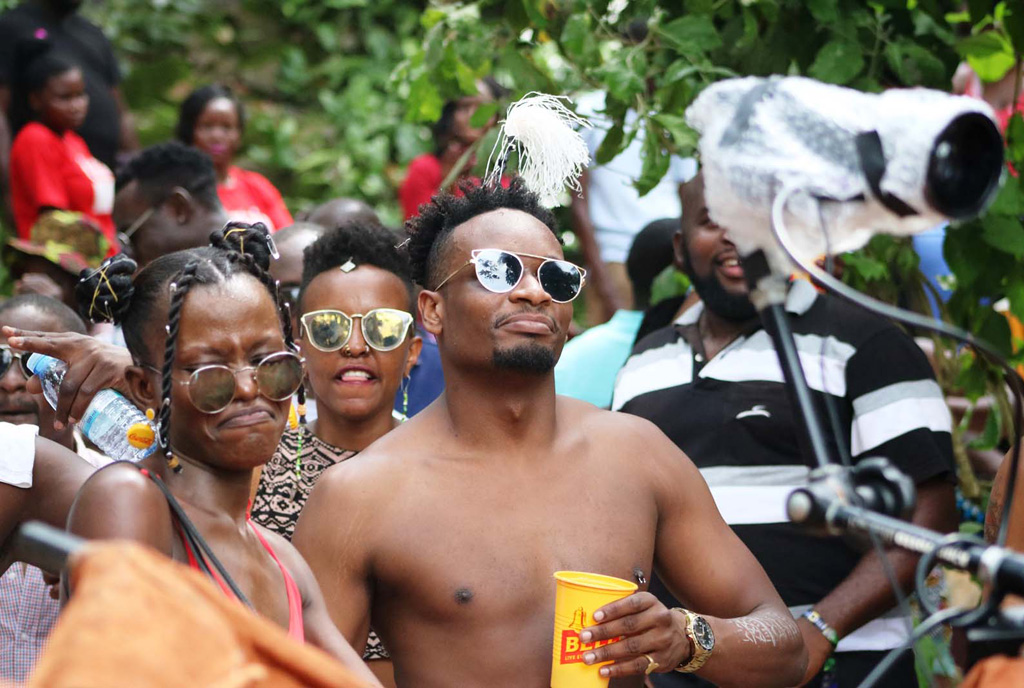 But as you could have imagined, the festival was a beautiful disaster, it rained for three days, the sound was not all that and the audience lost almost six hours to rain.

“On Saturday, our headlining act was stuck in his hotel room because it was raining hard, when we got to him, he said he thought the gig had been cancelled,” he says.

Yet the rain would later define the festival; after losing many hours in the shades, the downpour at midday on one of the days created some sort of resistance.

People that had been hiding in shades instead continued dancing that when it rained at future editions, revelers never fazed, in fact, they were rather bothered that there was no rain at the 2018 edition.

The first edition of Nyege Nyege according to Debru was planned only two months before the actual festival.

Since he has stayed in Uganda for almost ten years and for three of those, they had organised Warehouse Parties and different pop up gigs, they did not struggle to find a simple audience to begin with.

They had gone on to invite almost all the artistes they had worked with and as expected, the replies were few. 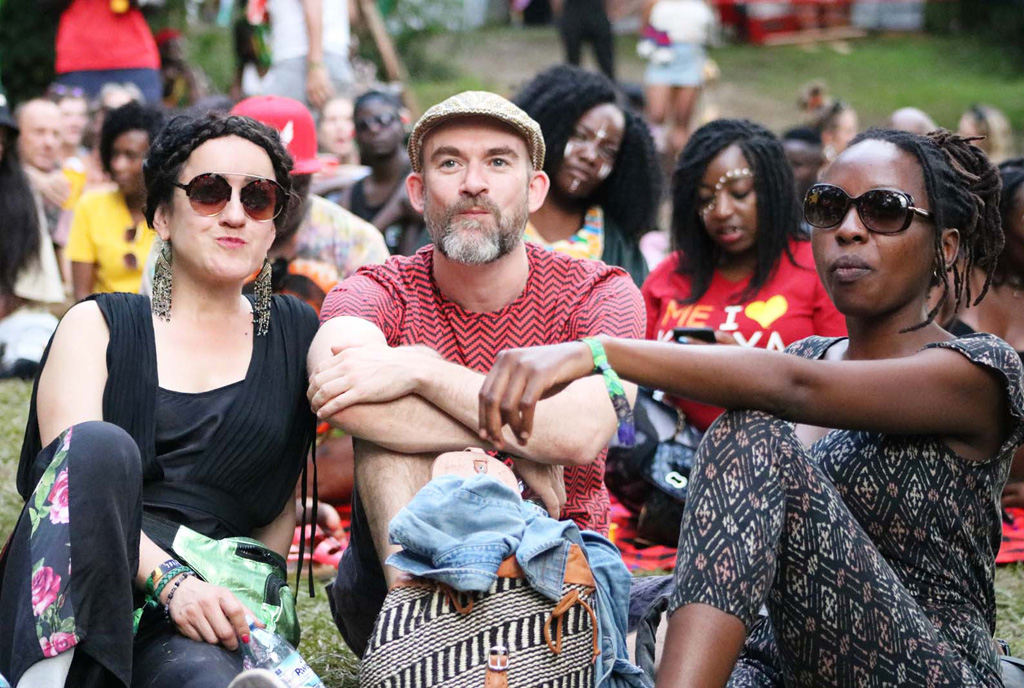 “Being a festival that is going to program underground music, we did not have sponsors thus we did not have a famous headliner,” he says that they sent mail to artistes they had worked with in Kenya and Uganda but the response was not impressive.

But they were yet to be shocked; “As the festival was getting closer, all artistes started confirming their attendance.”

At the end, the big number of artistes created confusion, they were too many and since the organisers had no festival organising background, some of the performers got carried away and stayed on stage longer than expected.

Festival made by its home

Like their previous parties, the intention was to throw a party in a place that was not known, like they had done with the warehouse – they wanted a place that had not been used for a festival and that’s how the Nile Discovery Resort came into play.

“The venue is what made the festival,” he says adding that reaching Nile Discovery, he knew it was the perfect place to have the festival; “Initially we had the right attitude, the vibe was there but when we got to the venue, we gained more confidence that the festival was happening.”

Nile Discovery was a muse for the first edition, closer to the road and yet looked like the wild, but that was not all, the vast land on which the venue sits could be turned into anything. 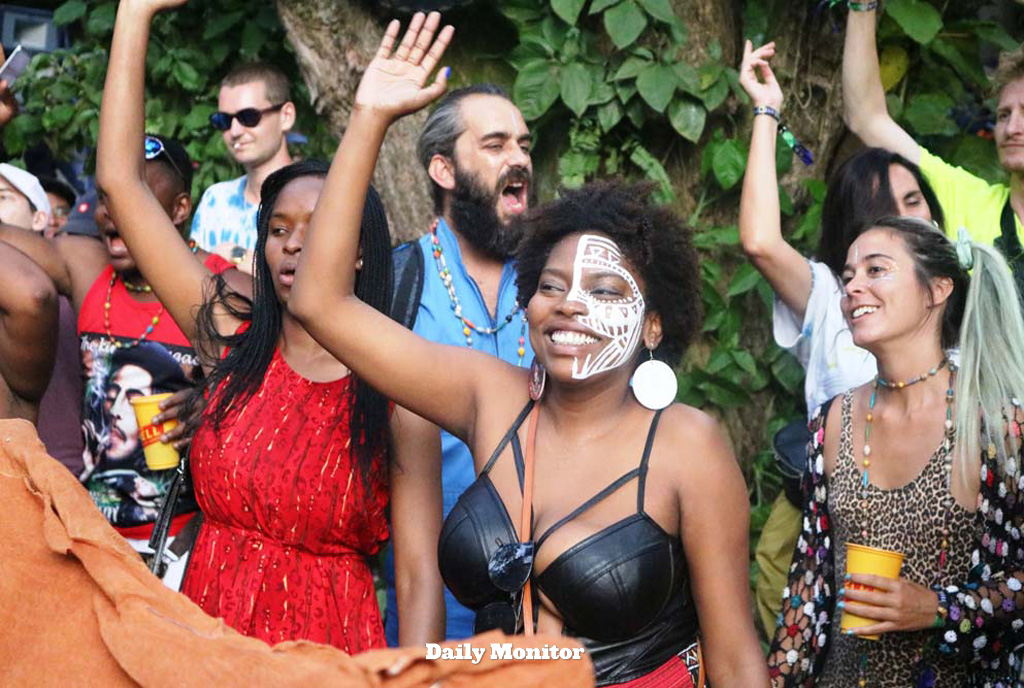 “It was a match made in heaven.”

To spice things up, people in Jinja did not know the place and neither those in Kampala,thus, it helped them stick to their earlier concept of throwing parties in random places.

A resident from Jinja notes that Nile Discovery was not known because the resort had been abandoned.

Their concept of the festival was new for the Ugandan audience but quite the norm in Europe; it wasn’t thus surprising that the first edition was such a hit with expatriates.

Debru says that this has since become a challenge for them as organisers; “we had not intended to create a destination festival, we wanted a festival Ugandans would come to and listen to something different.”

Today, Nyege Nyege has made locals and the government notice the powerful machine art and culture can be, especially when it comes to creating employment and driving tourists to a country.

In 2018, the festival faced some setbacks when the Minister of Ethics and Integrity banned before giving it a go ahead later; the success of the edition has gone on to attract the attention of many tourism players including the ministry.

“Last year, many people flew into the country for the festival and for the players, that was an opportunity to promote tourism and that’s what it is now, though it was never the target.”

However, when people are not dancing to electronic music at Nile Discovery or when Debru is not trying to make Nyege Nyege work, there is more to what they do than the festival. 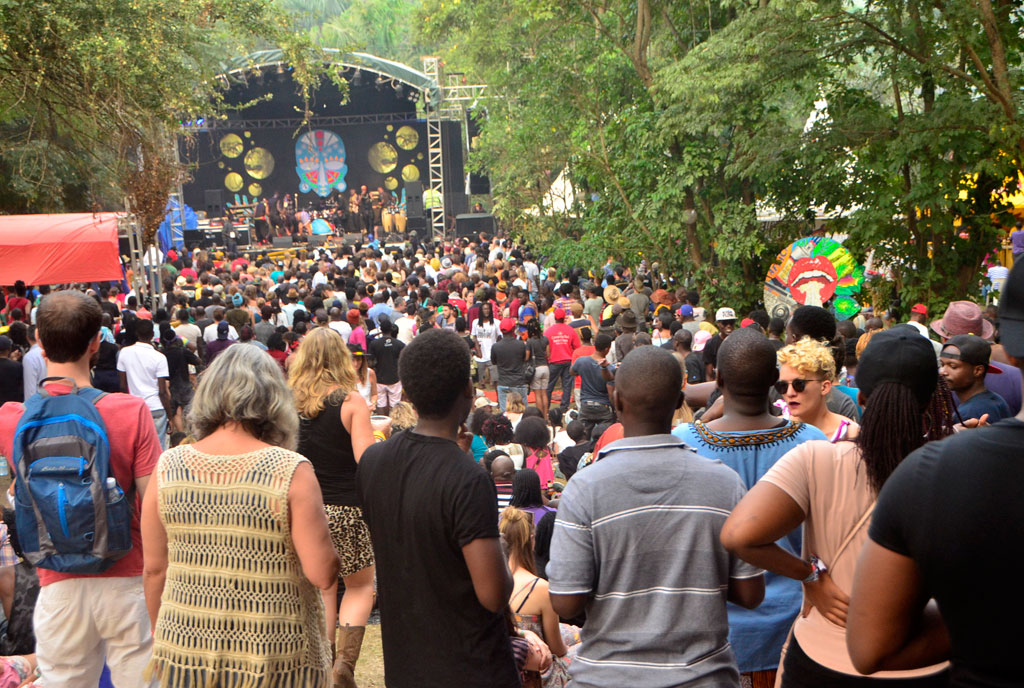 One of the things that stood out at this year’s Nyege Nyege festival was the free WiFi at MTN’s Wild Bae stage and the live studio sessions offered by Swangz Avenue at the Bell Jamz stage.
PHOTOS BY MICHAEL KAKUMIRIZI

For instance, after the first edition in 2015, Debru along with Arlen Dilsizian created Nyege Nyege Tapes, a record label that looked at benefiting underground artistes that had showcased at the Nyege Nyege Festival and of course a sound different from what was being played on mainstream media.

“The record label was supposed to allow us to promote artistes on a different level,” Debru says.

You could call Nyege Nyege Tapes the home of the ‘other’ music, the label draws from Uganda’s cultural diversity, whose sounds they play in fusion with techno, soukous and abstract electronic.

Otim Alpha, one of the artistes that Nyege Nyege Tapes has recorded, has since released, Gulu City Anthems, an eleven track album, on top of touring and performing at different festivals in Europe.

Today, Nyege Nyege serves as a festival, record label and a studio that has been credited for pushing some of the most forward thinking sounds in the world.

For instance, according to electronicbeats.net, the Nyege Nyege family had some of the best artistes at this year’s edition of the CMT Festival in Berlin. Founded in 1999, the festival celebrates a whole range of arts and music but they are mostly known for their electronic sound. 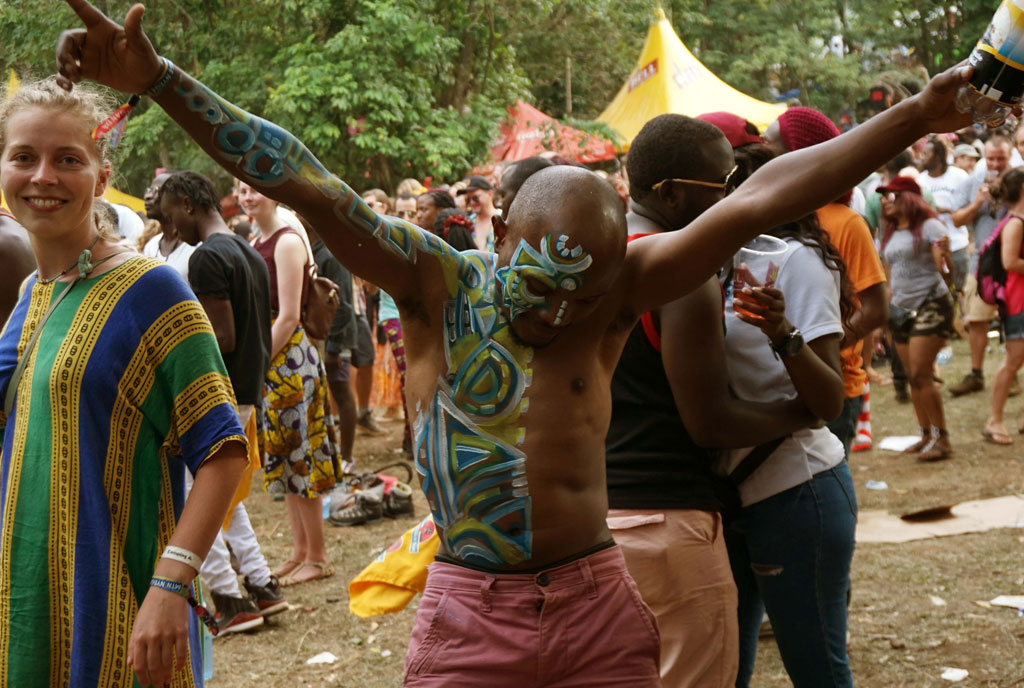 A reveler lets loose at the 2018 Nyege Nyege Festival. PHOTO BY ANDREW KAGGWA

So, why is Nyege Nyege famous?

Over the years, the shape of the festival has changed. The first edition had no sponsors and thus, all the beer or liquor on ground did not have an affiliation.

Most of these beers were foreign that even after people drank to their fill, the empty ones could not benefit anyone; “those maintaining the place had turned them into decoration but were advised to remove them for revellers safety.”

He says that the festival is still here because they are in constant conversations with its audience; “there’s a sound we love and we would want to see Ugandan embrace it but we can’t force it on them.”

He says that much as there is an audience for the 2015 sound of Nyege Nyege, there are those that need to be won over; “We invite them around to see Sheebah but probably will get introduced to some underground sounds and the next time, they will come back for that,” he notes. 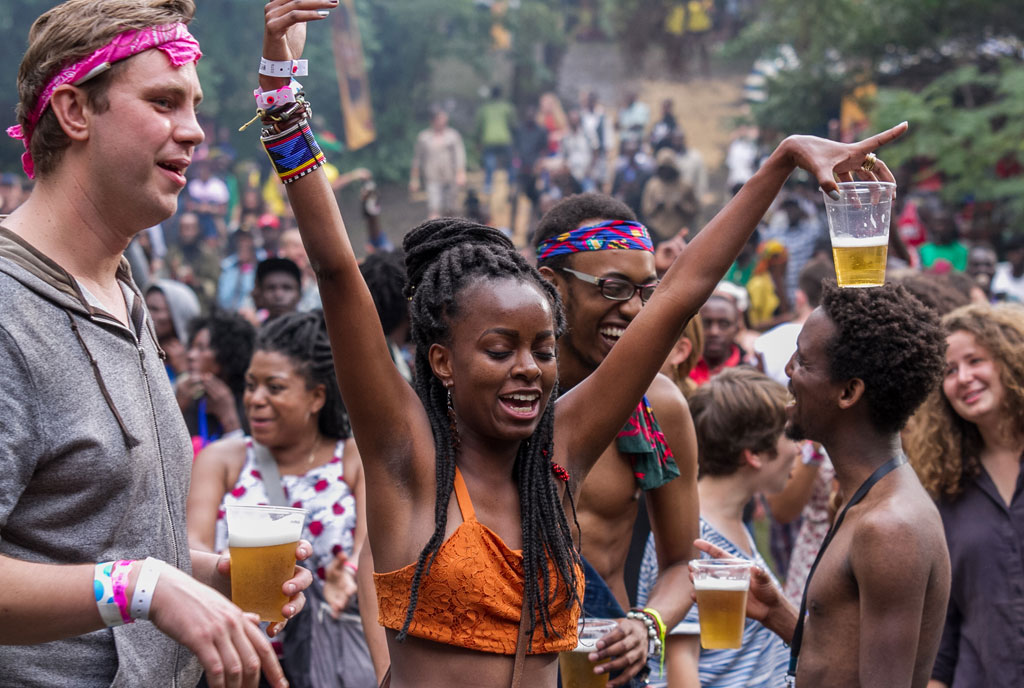 But he also says that it’s their dream to see underground artistes get that mainstream recognition, thus, he says that it’s encouraging when they share a stage with popular artistes.

“Imagine how an underground artiste will feel if Chameleone or Peter Miles jumped onto a Nyege Nyege Tapes track with them?”

For the expatriate community though, he says Nyege Nyege remains ideal because it’s cheaper than most of the festivals around the world and Uganda being such a tourist destination, people come for both.