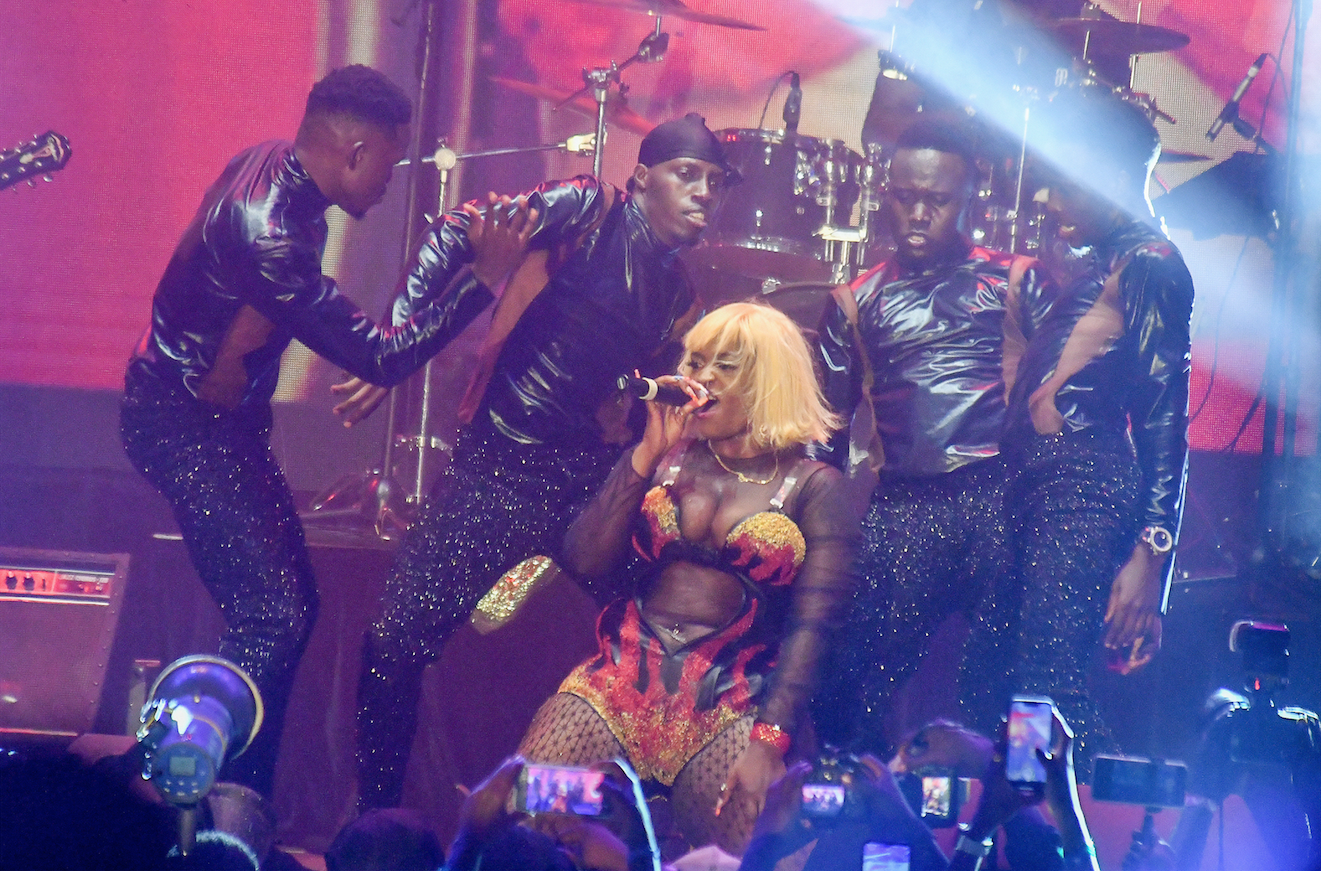 Winnie Nwagi surprised her fans when she emerged in a full gown. PHOTO | COURTESY | SWANGZ AVENUE

After Swangz Avenue announced that it was going to hold Azawi’s concert, an artiste who they had signed only two years ago, rumours surfaced that Winnie Nwagi was on the verge of quitting the label.

Reason? After eight years at the music label, Nwagi had never had a concert despite her great musical success.

But the songbird had only put pen to paper early this year, extending her contract with Swangz.

“I am used to working with all these experienced people in different departments. They all work toward my success so I am still at Swangz. I have never thought of quitting,” she said earlier this year.

She might have her personal flaws, but Winnie Nwagi is one of the most talented and loved musicians in Uganda, if anything from her maiden concert last Friday is to go by.

Likely the best attended show by a Ugandan artiste, all signs pointed to a success even with the early downpour in the day.  Revellers started lining up to enter the venue by 3pm and by 8pm, Lugogo Cricket Oval was almost full. At 10pm, the only empty space was behind a raised VVIP section where you could not see what was on the stage.

Nwagi was excellent on stage supported by Turbo black band, nevermind the glitches in sound; her performance was well executed and she gave the crowd what they had been longing for.

She started off with smooth ballads and kept elevating the show with the crowd’s favourite jams and that was the same story with her dresscode, where she started off fully dressed and she got rid of the extra clothes as the show progressed.

Nwagi, real name Winfred Nakanwagi, came on stage at 10pm after a 10-minutes fireworks display and a short video clip of some of the people who criticised her on their TV and radio programmes. This was a sarcastic move by the organisers – KT events.

Dressed in a pink floral dress, she kicked off her two-hour performance with Gwenonya, followed by Oli Kirabo. She then thanked her fans for turning up in big numbers.

“Thank you so much. You have filled cricket oval and I will never take you for granted and I am going to make sure you have a good time.”

She then went ahead and did Embeera before jumping on Katono, Detergent, Kibulamu and Everything. By this time, the crowd was singing along. The overwhelming love got her emotional. She then did Jangu, Amaaso rmx where she was joined by Vinka, Feffe Bussi and The Mith before leaving the stage for Vinka to do Fimbo and Thank God.

Wearing a gomesi with a few dancers, Nwagi returned with Kano Koze, Lukoba and Kwata Esiimu with Free Boy before inviting Azawi on stage, who excited the crowd with Bamutute, Slow Dancing and Party Mood.

Nwagi returned half-dressed for her last session with Matala, Bunsonsomola, Magic, For You, Yitayo with Chozen Magic, Show Me, Musawo, Malaika, Bwogana and crowned it all with Fire Dancer.

The success of the show could be attributed to a number of factors such as the hunger and solidarity of the public to see Nwagi in concert, the affordable entry fee at Shs20,000 and Shs100,000 VIP but most importantly it cannot be denied that the self-proclaimed fire dancer is quite the vocalist and her dance moves alone are a crowd-puller!

The organisation was not the best. Some people with VIP tickets were diverted to the general section. Instead of keeping law and order, police officers and bouncers used this opportunity to charge between Shs20,000 and Shs50,000 for anyone who wanted to cross from the general to VIP section. There were incidents where people were beaten up and items including phones and wallets stolen.

Balaam and Vibes Sounds were some of the people outsourced for handling sound and stage but it was not the best experience.

Nwagi’s microphone was low and she stretched her voice in the beginning. You could see her frustration at some point but when that was cleared. Speakers went off  thrice during her performance.