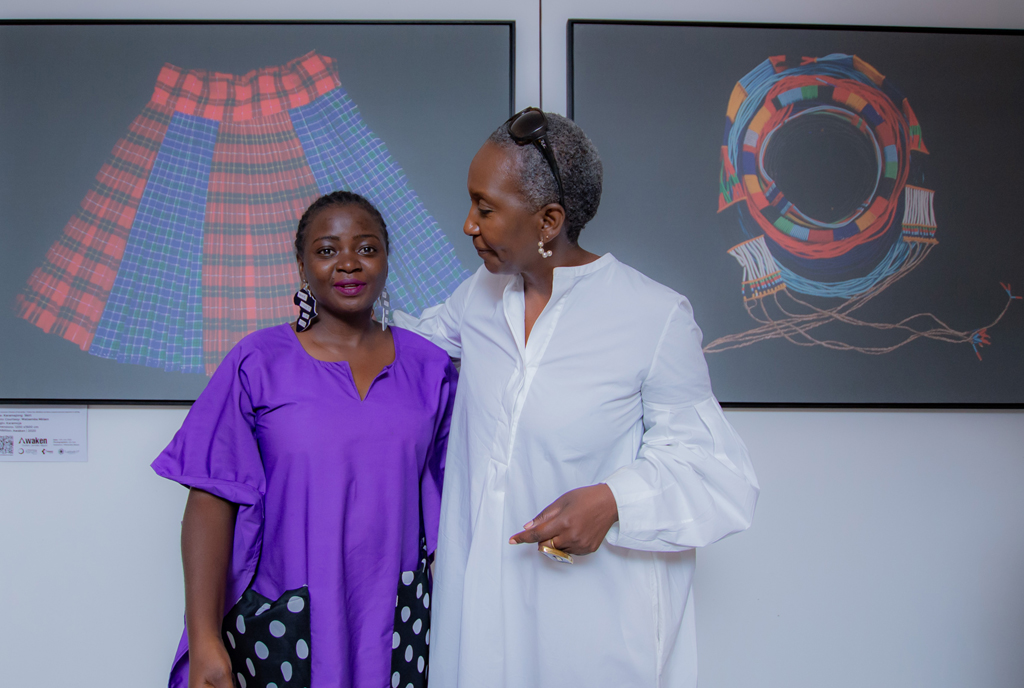 Mariam Watsemba, one of the photographers at the earlier exhibition with Jennifer Mpyisi, the curator of Awaken exhibition.

When Uganda like the rest of the world was faced with lockdowns as a way of preventing the spread of Covid-19, lives were affected.  With both governments and Non-Government Organisations (NGOs) overwhelmed, ordinary Ugandans had to step in. In fact, it took the president calling on Ugandans to get involved.

If there is one area that many Ugandans don’t seem to understand clearly, involves giving back. Naturally, Africans give back and fundraise for those in need but most of the time it is part of their cultural practices that is deliberate.

At the opening of the Awaken exhibition at Latitude Hotel in Makindye, Jacqueline Asiimwe, the CEO CivSource Africa noted that much as many Africans may have a differing understanding of philanthropy they are heavily invested in helping others out in need.

“Take an example of death, there is always a lot of money people usually collect to help in sending off a loved one,” she said.

The exhibition was intended to depict and record existing symbols and expressions of giving through the photography of Miriam Watsemba and Jim Joel Nyakana.

The exhibition was however just one of the many events that CivSource Africa has organised to promote philanthropy as well as strengthen partnerships among the actors.

The event at Protea Hotel in Kololo on July 22, for example, brought together players from fields such as the civil society and business community.

Through the discussions, different players such as bankers noted that it is important for organisations to know what the different establishment’s niche is or what their objectives are.

Most of those present said that businesses are never clear about their objectives and thus, organisations blindly send their proposals only to be turned down.

“What if you made clear the kind of organisations you work with,” argued one of the participants while one noted that most businesses want to work with already established multinational organisations for media mileage.

However, even on CivSource’s side, they noted that it is still hard to involve local businesses and people because of misconceptions around philanthropy.

“There are many people we meet and try to engage and they will argue that organisations already get their funds from the west.”

But also said that other challenges come from the fact that most people willing to give back usually censor themselves because of possible repercussions. It was noted for instance that most businesses will always want to know what a famous multinational company contributed before contributing as well.