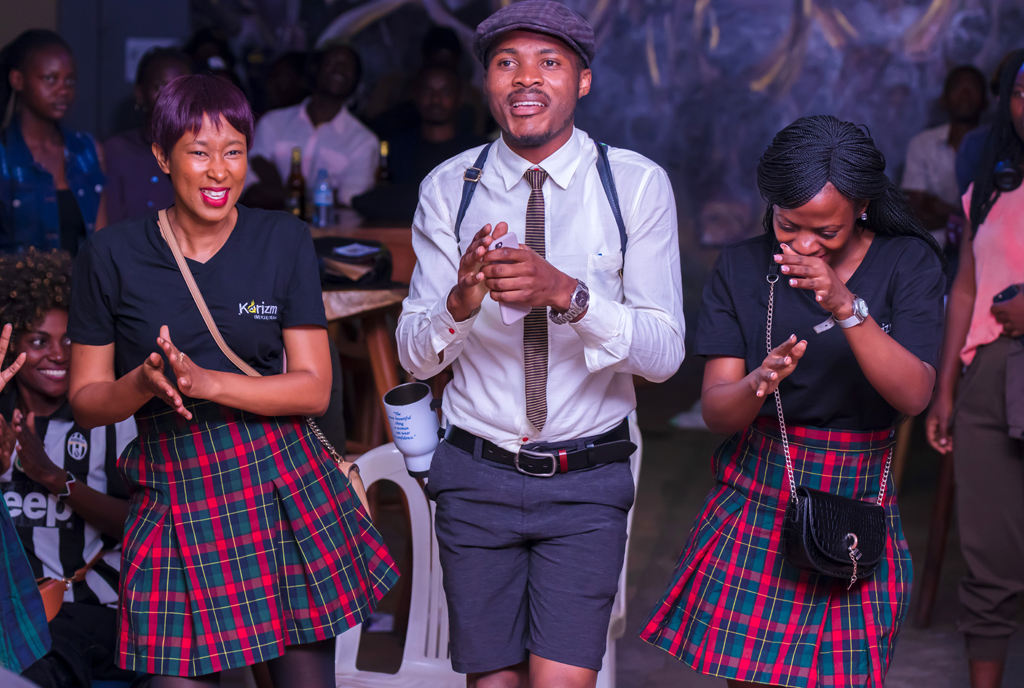 From comedy, poetry to music, Friday was a busy day for artistes and revelers .
At Alliance Française in Bukoto – Kampala, nearly 200 hundred people took part in the Akatuuti Back to School Edition which presented a toast to Poetry, comedy, Dejaaying and live music.
Singer Sandra Suubi put up another special performance yet revelers got thrilled by new comer Brian Busuulwa.
Reminiscing the good old school days with the theme back to school, the show started with a bell that was sounded by actor and stage manager, Isima Ssemuju, he was also one of the Mcs of the day.

Revelers were then asked to line up in a school parade setting as the Mcs fused comedy with drama to break down the show. Poet Mitch Isabirye presented the first act in form of school prayer followed by gospel artiste Lyrical Michael.
With all that happening in front of a shuttered stage, artiste Christine Nyinebirungi presented an environmental themed fashion showcase which was later accompanied with a brief narration.
At around 8pm, budding musician Brian Busuulwa took to the stage. Known by a few in audiences, his performance moved the crowd that even attempted to sing along.

Literally announcing himself to the audience, Busuulwa perfomed four songs off his yet to be released Naaka album. Crowning his performance with a song titled Omuto Naaka, he took time to jam with the audience, showcasing his skills on all the backline instruments on set.
Suubi added to the vibe with her songs Dawa,Togwaamu Suubi among others. Producer Joseph Arinaitwe capped the event with a live Dj session that attracted poets and other musicians to jam to the beat.