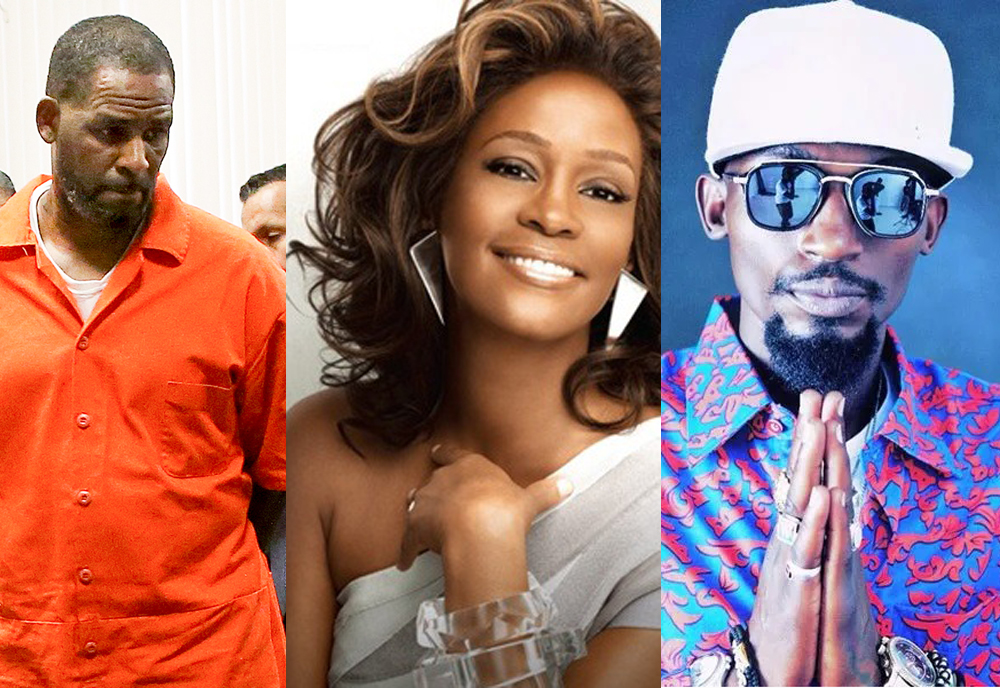 Untameable: In the music industry, being superbly talented to the extent of being labelled “genius” is a blessing every aspiring game player prays for. However, this blessing is often a curse to those it is bestowed upon as it comes with so much power that might be self-destructive if it is abused. Recently, the world stopped and gasped when Robert Kelly, better known as R. Kelly, became the latest victim of  “genius gone destructive”. His unattainably-enviable legacy was chaffed into dust after he was slapped with 30 years in the coolers for using his fame to molest underage girls. Kelly’s predicament is not unique to him alone, in this edition, Trevor Taremwa dives deep into superstars whose abuse of their genius has taken them down to a similarly tragic drain.

Born Adija Palmer, Vybz Kartel is the modern-day poster child of dancehall music. His superb mastery of literature, the streets and melodies have left him light years ahead of his peers. However, despite his mind-boggling fame, money and talents, Adija Palmer will spend the rest of his life locked up in prison after being convicted for the murder of his associate, Clive “Lizard” Williams.

Vybz Kartel’s dancehall prowess propelled him to undisputable fame and wealth which gave him freedom to live up to his bad boy image by buying guns, weapons and mercenaries. This way, he ordered the killing of Clive after a gun dispute gone wrong only to be betrayed by leaked texts.

Kartel continues to dominate dancehall charts even after a decade of his lifetime incarceration. A prime example of genius turned curse.

Michael Jackson is Michael Jackson. He stands alone in his pantheon. The king of pop has a legacy to be unmatched for ages to come, however, he had a penchant for self-destruction. Jackson, who was seen as a pillar for black excellence, rubbed black culture the wrong way after he morphed his skin colour to white. His life was tainted with controversy but not as much as his after-life. Jackson was the subject of a two-part post-humous documentary, “Leaving Neverland”, where the popstar was accused of sexually harassing male children. Before and even after his death, Michael Jackson was the subject of multiple sexual abuse accusations and police investigations as well as civil and criminal lawsuits.

Whitney Houston is a tragedy.  For a black woman of her talents, she is supposed to be celebrated as a hero in black culture today. Houston during her career made a mark as one of the greatest RnB and pop artists of all time with hits such as ‘I Wanna Dance With Somebody’ and ‘I Will Always Love You’ becoming immortal classics. Houston won numerous Grammys and became one of the greatest black artists of all time. However, her marriage to Bobby Brown, the industry bad boy, introduced her to drug use and it was not long before the world was struck with the tragedy that she had been found unconscious, face down in a bathtub at a hotel due to excessive cocaine intoxication.

Bujju Banton is undoubtedly one of the God-fathers of dancehall in contemporary time. While most of his contemporaries derive their bragging right from street credit, Bujju Banton has a Grammy. After accomplishing this fete, one would think that Bujju would have nothing to do with breaking the law.

The dancehall hero was however, arrested in Miami a year later and charged with conspiracy to distribute and possession of more than five kilogrammes of cocaine. The Grammy legend was then sentenced up to 10 years in the coolers in a US jail for his role in setting up the 2009 cocaine deal.

In December 2019, Bujju Banton was released from jail nine years after he first arrested on drug charges and despite collaborations and features from mega stars like DJ Khaled, Buju only remains a shadow of his former self as the game has moved on with droves of youngsters having infiltrated the spaces he formerly used to be known as king.

Born Robert Sylvester Kelly, R. Kelly is the latest masterclass in how a genius can throw everything away.

Kelly absolutely needs no introduction. He is credited with helping redefine RnB and hip hop, earning nicknames such as King of RnB, the King of Pop-Soul and the piped piper of RnB. Kelly was beyond accomplished as he is regarded as the best RnB artiste of the ‘90s and one of the world’s best selling music artistes. His smash hit single I Believe I Can Fly won three Grammys.

Kelly’s career is what many people can call a real-life fantasy. However, all that is close to no more.

Today, if one browses R. Kelly’s Wikipedia page, before his great musical records and legendary musical accomplishment comes the title, “sex offender”. After a six-week trial including two days of deliberations, R. Kelly was charged with nine accounts, including racketeering and sexual abuse.

On June 29, 2022, R. Kelly was sentenced to 30 years in jail for using his celebrity status to abuse children and women.

At 55 years old, the once-celebrated legend will be remembered less for his music but more for his poor choices as he will serve the next 30 years of his life in jail with most of his music stripped off streaming platforms. Tragic!

Kanye West is literally the proverbial cat that had nine lives. There has not been a much more prime example of sheer genius that is troubled with demons more than Ye. Kanye strives to be great in the same breath as destructive. Controversy is Ye’s third name. He has done it all, from accusing George Bush of not caring about Black people (a moment George Bush called the most disgusting moment of his presidency), to embarrassing country music sweetheart Taylor Swift live on stage (something Obama had to insult him for), to publicly admitting to his pornographic addiction and blaming Black people for their own slavery. Kanye West has faced backlash for his friendship with Donald Trump, running for presidency and his estranged relationship with ex-wife Kim Kardashian.

West is one of the most decorated artistes of all time, a multi-billionaire and creative artist who is recognised as one of the greatest craftsmen of his era. His also so good at constantly crafting his own downfall.

Prince Paulo Kafeero was a celebrated Ugandan folk singer who is regarded as one of the best recording artistes to have ever walked this country. During his career as a musician, he won several prestigious awards, including two PAM awards for best Kadongo Kamu artiste.

Paul Kafeero was the first Ugandan to win a gold medal as a lead vocalist in 1994, when institute da Etudes Theattreales, a French body specialising in country music, declared him winner out of 6,000 contestants from Africa. The honour came courtesy of his song Walumbe Zayaa, a 15-minute record in which no word is repeated.

Despite his heroics, his legendary status was often downgraded by his chronic alcoholism, which portrayed him within industry circles as a nuisance, something he admits in his famous confessional song, Dipo Nazigala. He was also a reckless polygamist who used his fame to sire droves of children with multiple women, something that overshadowed the agenda of his death as opposed to his legacy as a powerful street teacher.

Upon his death, it was declared that he had succumbed to malaria, but it is, however, suspected that his ailments were the result of liver failure that had developed from his incurable alcoholism.

After his death, most industry authorities came to affirm that Mowzey Radio, real name Moses Nakintije Ssekibogo, might arguably have been the greatest vocalist and lyricist of not only his time but all time. Before arriving at his stardom, Radio is described by most peers to have been humble. However, with fame and money, he became synonymous with vices such as alcoholism, intoxication and violence. His frequent intoxication led him into both minor and major feuds and it was in such fashion that his unmatched legacy was extinguished.

The music genre of hip hop is synonymous with these two names. For more than two decades, many have tried but have not come close to the legacy left upon hip hop by these masters of this craft. When it comes to story telling and the power of a brand, Tupac Shakur is incomparable. On the other hand, lyricists over the ages have gone back and forth but no one has woven words into beauty like the Notorious B.I.G.

Tupac is widely considered one of the most influential rappers of all time and also being one of the best-selling music artistes, having sold more than 75 million records worldwide. He became a central figure in West Coast Hip-Hop for his conscious rap lyrics. However, in years leading up to his death, Shakur had abandoned his introspective lyrics for volatile gangster rap.

During the latter part of his career, the gangster image he had started associating himself with was cause for him being shot at five times in the lobby of a New York recording studio and experiencing legal troubles, including incarceration.

After being released from prison, getting off the hook of sexual abuse charges, he signed to Death Row Records and became heavily involved in the infamous East Coast versus West Coast hip hop rivalry.

In 1996, he was shot at four times by an unidentified assailant in a Las Vegas drive by shooting and passed away six days later.

Among the key suspects was the Notorious B.I.G, given their public feud.

Unlike Tupac who was known for conscious rap, Biggie was rooted in New York rap scene and gangster rap traditions but is nevertheless considered one of the greatest rappers of all time.

Wallace was known for his distinctive laid-back lyrical delivery, grim content and semi-autobiographical content whose themes of hardship, criminality, debauchery and celebration made him an all-time fan favourite.

While a key suspect in Pac’s shooting, B.I.G was also later gunned down six months later in a drive by shooting that occurred when B.I.G’s entourage had parked at a red light.

The story of Tupac and Notorious B.I.G is a tragedy of two black youth who at 25 and 24 (respectively) passed on with so much potential and light years of more excellence left ahead of them, if only they had not thrown their lives away to the ruthless gang culture of the late ‘90s.