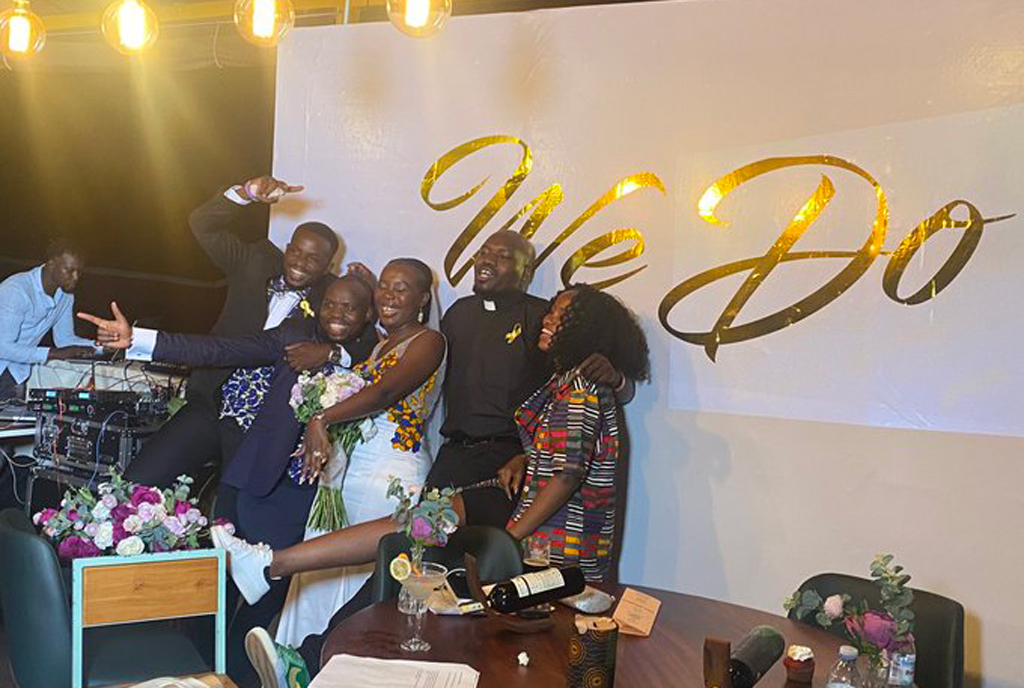 The ‘couple’ with some of the guests. Photo / Courtesy

What started as banter on Twitter a few months ago culminated into an exchange of nuptials between Moses Echodu and Olivia Winter Karungi last Friday at The Aleph Bar and Restaurant, Kanjokya. It all started when two friends, Joseph Aredo and Lewis Semujju initiated a campaign to help their friend Moses Echodu find love. Within no time, word had spread. While all this was unfolding, a certain Olivia Winter Karungi, a civil engineer, took to Twitter, letting the world know of her desire to have a photoshoot in a wedding gown. It was then that a colleague, Zenji Simon, alerted Echodu of Karungi’s wish and ideas spilled all over.

Having survived Burkitt Lymphoma at 10 years of age, a cancer associated with impaired immunity, Echodu now volunteers as a programs director at The Uganda Child Cancer Foundation.

When Echodu and Karungi met, the idea of a mock wedding with the aim of fundraising for the cancer foundation was born. The plot gathered steam and a fair share of partners such as The Aleph, Sole Connect, Sparkles Salon and others. Of course this could not go on without alerting relatives to avoid getting shocked with pictures of their own getting married out of the blue. The day came and the couple had Bernard Olupot, aka Beewol, presiding over the ceremony as the priest.

The vows were hysterical and about banter; Echodu teased Karungi about supporting Manchester United and the Black Pirates, a local rugby side as she repaid the favour by joking about the groom’s love for Arsenal and Heathens. Only Shs20,000 would make one part of the wedding and in the end, about Shs6.5m was raised for the child cancer foundation. It was a good cause on a good day that brought people together in a fun way.

Twitter might be known for some wrong reasons but Echodu and Karungi got the best out of it. Who knows, maybe one day they will make this real.