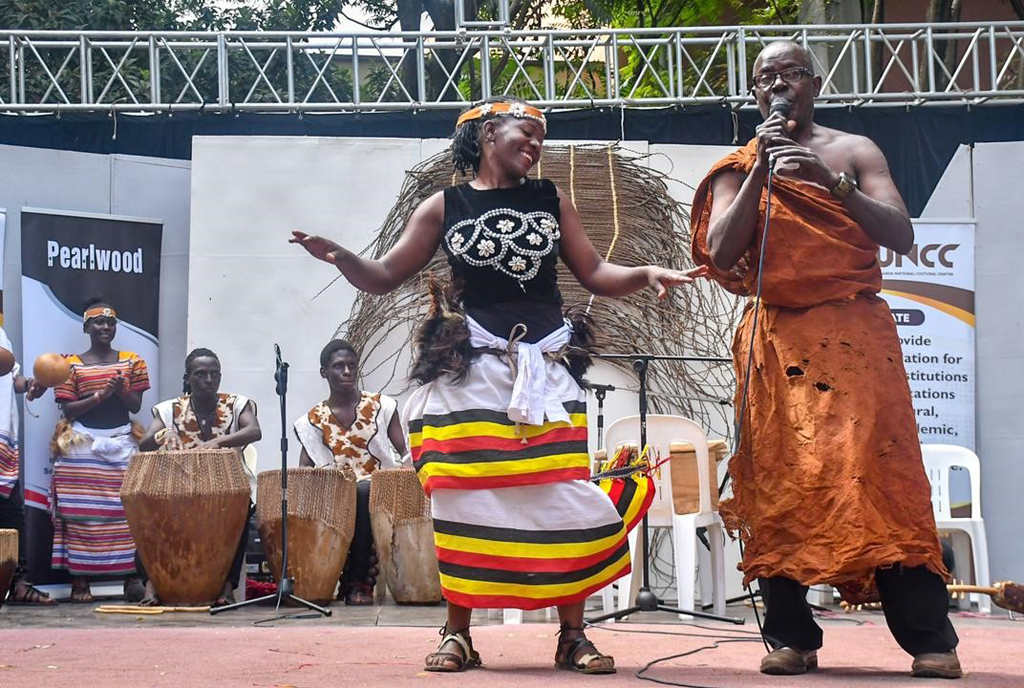 John Ssempeke during his performance and Left, Some of the people playing a game of okwepena. Photo / Edgar R. Batte

Adorned in backcloth, Prof. John Ssempeke bellows into the microphone, singing as his fingers uniformly pluck strings of the endingidi, a traditional instrument from which rich musical sounds pierce through the air.

An eager audience applauses him as he steers the tempo. Progressively, he rallies different musicians, a set at a time, into an ensemble of performances; drummers beat them with so much passion, then agile dancers come out shaking their waistlines to the rhythm as if to invite the ones with the shakers to join in to complement the mellow sounds.

Ssempeke’s stage showcase was one of the highlights at the celebrations of World Culture Day at the Uganda National Cultural Centre on Saturday where it was about entertainment and education about culture and heritage.

The entrance to the upper grounds of the theatre was appropriately and uniquely built with a grass-thatched entrance that gave revellers a feeling and aura that they were entering a culturally diverse space.
It was dotted with art pieces, many of them colourfully portraying Uganda’s wildlife and cultural heritage.

The stage for the performances had decorative grass patches as well as large curved out gourds, long drums and sticks.

There were more drums on the stage, and each time they were sounded, passers by along Siad Barre Avenue turned into onlookers, peeping through metallic fence lines to steal a glimpse of energetic musicians in artistic element and action.
Many parts of the theatre came alive.

The chief organiser of the event, Andrew Ssebaggala, said culture is what partly makes people who they are, so all efforts wer undertaken to make sure there was enough exhibitions to showcase Uganda’s diverse cultures.

The director of Gender and Community at the Ministry of Gender, Labour and Social Development, Juliana Naumo Akoryo, said this year’s edition was the best she had witnessed since 1999 when the culture day was first celebrated in Uganda.

Learning
The foyer was one place to see and learn about a number of items from different cultural settings and Maureen Mutonyi Kiyaga, the heritage officer at the National Theatre, took guests around and provided knowledge about hoes, knives, music instruments and other artifacts.

There were women dressed in gomesis to respond to questions from visitors. Esther Namugalu was one them, explaining about the traditional importance of the different mats.
A youthful Riyan Namukwaya explained her showcase of reusable pads, with a historical perspective of how banana fibre was used to protect girls and women during their periods.

At the entrance of the theatre, girls, boys, women and men got nostalgic as they engaged in playing different games such as duulu, okwepena, omweso and more, thanks to segment organisers – Cheza.

In-between were artists skillfully exhibiting their creativity in a live-painting session, drawing the curiosity of Naumo to get a hold of the painting brush and add her artistic inspiration on board, and so for theatre’s board members Sam Okello-Kelly and Fred Mutebi. 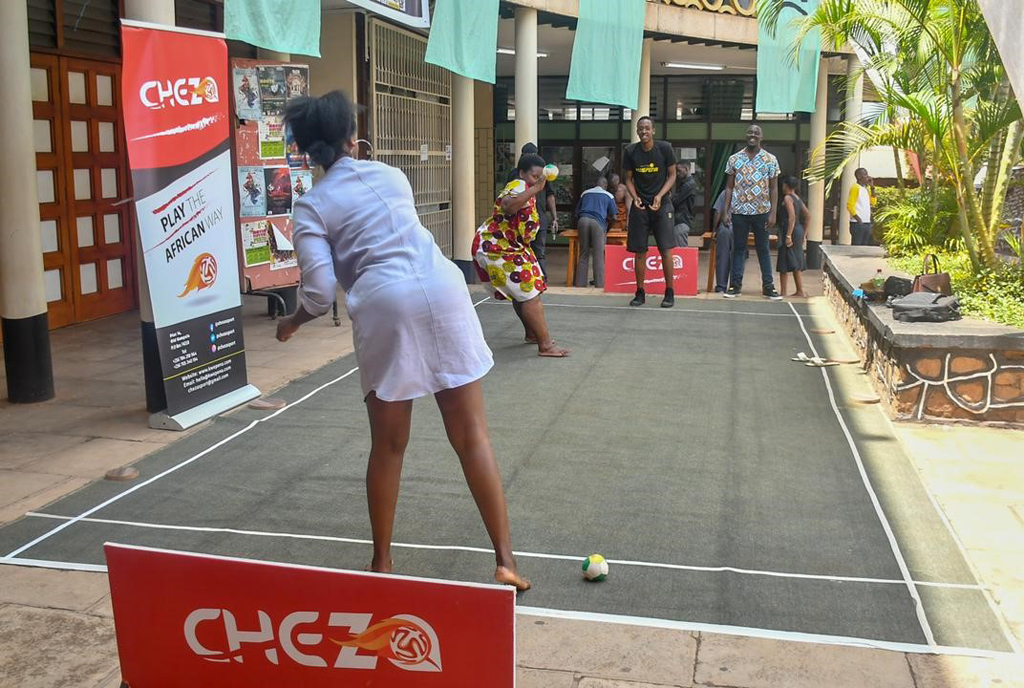 The upper compound had stage performances where revellers were treated to traditional dances by Afrique in the Roots and acoustic music by an amiable Andereya Baguma who connected with the audience thanks to his simple and socially conscious songs that he interjected with jokes.

In sync with this year’s theme of the culture day that roots for rebuilding of the creative industry, the vice chairperson of National Cultural Forum, Charles Batambuze, offered some food-for-thought in respect of artist’s economic value which, as he argued, lies in the protection of their content.
Contextually, he observed that it is disturbing to know that telecom companies have made whopping amounts of returns from caller tunes from which government took a 50 percent chunk and the owners of the tunes – artistes – get peanuts.

To that end, he announced that they were in the process of petitioning the minister of Justice, something Naumo suggested is halted to allow engagement of diplomatic avenues.
Above the greenery and tarmac, were colourful art and craft items on display, including baskets, woven bags, mats, home decor, and more.

In the green room, were some rare items; on one end, were a collection of visual and audio equipment from the library of Uganda Broadcasting Channel where the station’s librarian, Jacob Noowe, narrated the usage of largely outdated machines which technology has since knocked over.
On the opposite end, were the Brim Collectibles which included vintage music and home use items from the family-run store.

In the middle, was a display of more old but interesting items that are proof of the wisdom of our forefathers, and as Uganda Museum’s assistant education officer, Joseph Ssebunya, explained, innovation was not a preserve of imperialists or foreigners as evidenced by fiddles, flutes and other music items that were made by brilliant minds from different communities in Uganda.
The culture day was a culmination of weeklong events, many of them pointing at the reprise of the creative sectors.