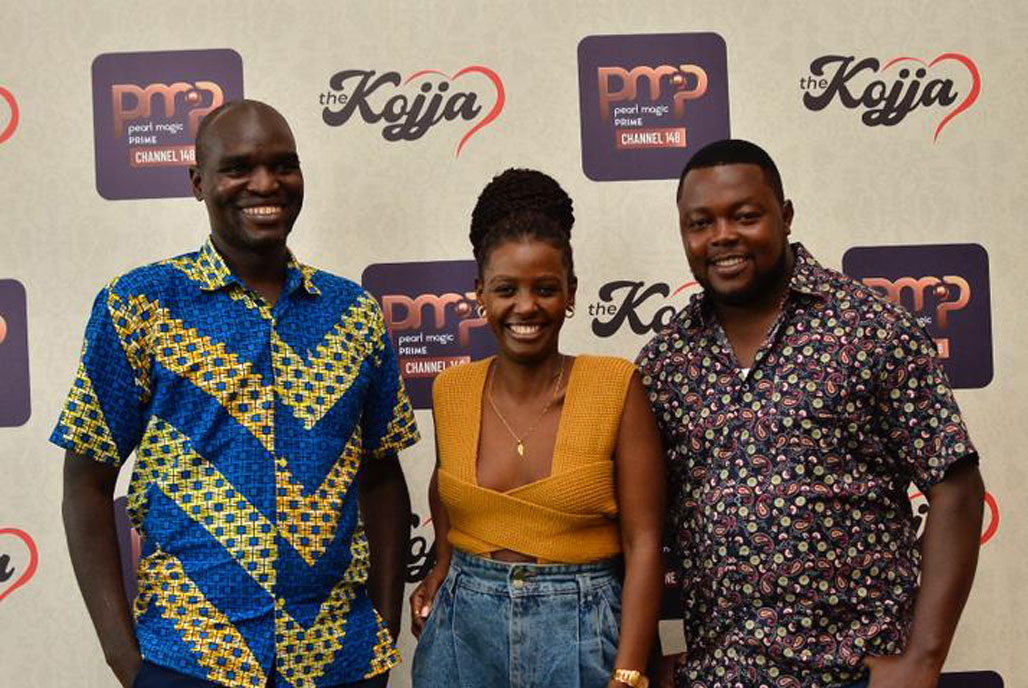 L-R: Dilman Dila, the producer of The Kojja with cast members Tania Kankindi and Amon Nuwamanya at the premiere. PHOTO/COURTESY

It is easy to say 2020 started what would be described as a new leaf for the film industry. For the first time, filmmakers started making money off their sweat. Unlike 2019, today there are many people who are fully surviving as filmmakers. This is majorly because of Pearl Magic Prime.

Since the channel was planned in 2020, there have been efforts to commission lots of local content. This means that instead of licensing content where a filmmaker forks out their own cash to produce content and sell to buyers, this time the buyer commissions content and pays handsomely for it.

This process has since given us shows such as Prestige, Sanyu, Mama and Me, Story Yange, The Salvador Show and of late, The Kojja.
The Kojja is a comedy miniseries that follows the life of a boda boda rider who finds himself solving a marital problem while hiding at a marital counsellor’s office.

The success with this particular client sees them specifically come back to seek specific services the next time.
How a boda boda man fits himself into a workplace where counselling is actually a career or how his now new workmates will react when they learn he is actually a boda boda rider is what the comedy drama tends to unpack in the next number of episodes.
Amon Nuwamanya brings to life Ponsiano Maraka, a boda boda rider who notices there is money to be made by listening to people’s problems. And of course, instantly declaring himself a kojja.

Nuwamanya brings a lot of discipline with him, thanks to his formative years and exploits in theatre. He has acted on both stage, radio and television. And he seems to put lots of heart in the different roles he gets assigned to, be it a walk through history in a play such as Red Hills or a social commentary such as Yat Madit, Nuwamanya will embody his roles with grace.

His character of Kojja Maraka carries a lot of faces and has a heavy burden of driving much of the story and the comic relief, at least according to the debut episode.

Then there is Prynce Joel Atiku, a face you can hardly fail to recognise on the local film scene. The man emerged at the time filmmaking was almost a myth with Matt Bish’s Battle of Souls and has gone on to impress with each role he touches. Atiku was one of the few Ugandans who featured in M-Net’s commissioned drama, Kona, back in 2013 but besides that role, he has been in films such as Kony Order From Above, State Research Bureau and Joel Karekezi’s The Pardon. In The Kojja, Atiku is James Kamoga, Maraka’s nemesis who also happens to be the resident counsellor being upstaged.

Being a sitcom, Atiku may struggle a bit, considering the fact that he has come this far, he has been doing roles that always demand for the serious side of him. Some on the way were even very physical; generally he is not known to act funny or be funny. Thus beyond the few minute appearances he made in the premiere episode, we need to see how he grows into a role that demands less emotions from him.

Tania Shakirah Kankindi plays a destructed receptionist of Kamoga, Aphohia. Kankindi is a gem few people have managed to unpack. Like Akuyo, she has a knack for tapping into her emotional side while dealing with roles and yet this particular character demands less from her. So far, her interpretation of Aphohia is good, she acts as the show’s story link. Being a receptionist, most sagas start with her before they are taken to the counsellor, thus her reaction or choice of words at times says a lot about the place she works.

For the first minutes of the show, the writer gave her cony lines that would easily make the person watching believe the counsellors were crooks of sorts. But what do we know, it is a pilot episode, many things are possible in the 50-something episodes.

Tania has been around, she has been on both stage and screen. Her breakout role, at least one many may remember, was on TV series Coffee Shop and later Power of Legacy. She has also appeared in Mariam Ndagire’s My Husband’s Wife and Nana Kagga’s My Sister’s Keeper.