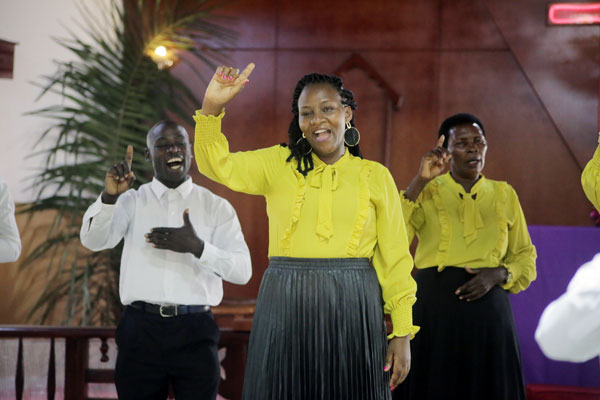 According to Lydia Mubangizi, the choir coordinator, people in the area usually struggle to access men of God, when they are urgently needed.

The role of music in worship has been overly documented.
Preachers have often said that music has a way of piercing into the deep parts of our soul, that assists in our expression and response to God and to the church. Singing helps unites us to the church. The gospel alone unites believers to one another. However, music is a tool that allows us to do so.
That is why it is not very surprising that a good number of artistes on the mainstream scene, from instrumentalists to vocalists have some history with the church.
And the church of course has not stopped creating songs praising and worshipping.
Last week, as one of the activities to usher in the holy week, believers at St. Luke Namayina Church of Uganda in Gayaza came together to celebrate the gift of music.
They did this with the launch of their choir’s debut album, Olugendo. The album compiles a number of worship songs, some renditions of what we have heard before while others are fresh.

The music, like of course many of those done by the choirs, seems to celebrate the miracle of resurrection as well as the passion of Christ.
Launching an album on Palm Sunday, the choir chose to kickstart their performances with songs that observed such a theme. They did two songs that all talked about Jesus’ triumphant entry into Jerusalem and after those, they dived into those about resurrection.
The songs were a mixed bag of tricks at times fusing drama, spoken word and the ordinary singing most people are used to. While singing about Jesus’ sacrifice for instance, the actors may have gone method with their style of acting while re-enacting the journey that led Jesus to the cross and later his death.
The lashes to the gentleman that was acting Jesus seemed a bit brutal and some of the people in the audience became uncomfortable, but that was not the best part of the performance.

The simple production values it came with may have been the winner, the ability to sync their lights into the show to create moods such as fear and tension were totally outstanding.
But besides releasing the album, the church is also interested in putting together a house for reverends that usually come around to conduct services.
According to Lydia Mubangizi, the choir  coordinator , people in the area usually struggle to access men of God, especially when they are urgently needed.
“Sometimes, the sick need to pray with the reverend as the Bible instructs, but they are unable to access his home,” she says.
But above it all, the act of using music to fundraise for something such as a reverend’s residence, according to Mubangizi, was a way of showing Christians in different places that at times they do not have to wait for outsiders to come and do things for them, they have to take on challenges themselves.