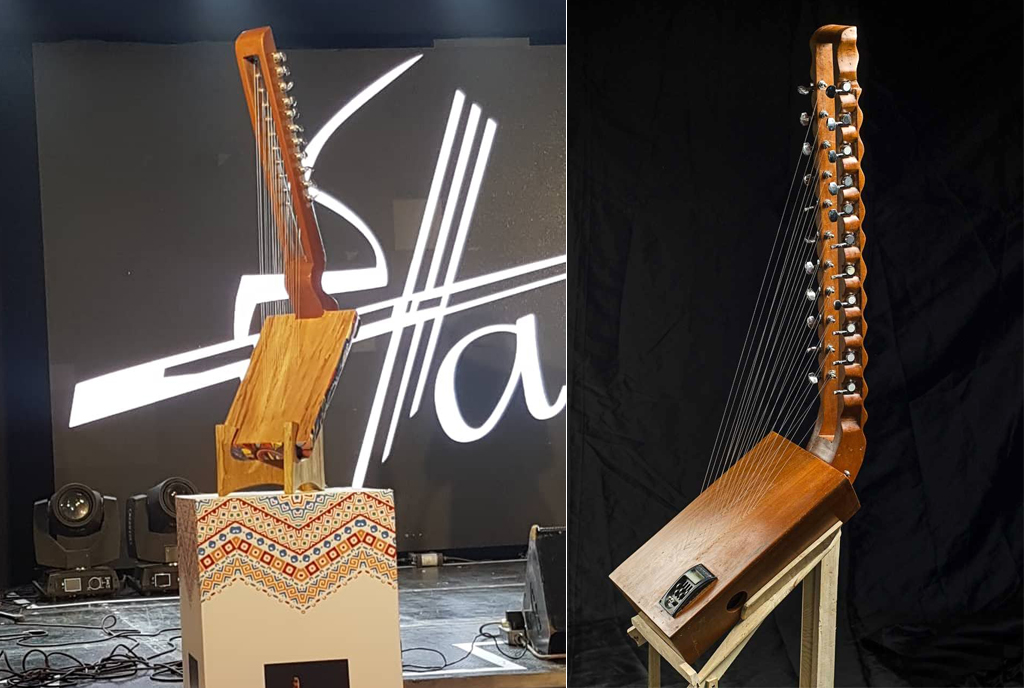 To understand the story of Janzi, you have to go back; many years back, to a story of one adungu.

An adungu that failed to catch a flight because of its look.

It’s a story James Sewa Sewa told me the first time I visited his place. It must have been 2016, I don’t know how long he had been working on the instrument; all I knew was a fact that it looked exciting.

He told me about Janzi, the instrument. Like the band he had helped to form and later enjoyed success on the live music circuit in the city, the instrument had been named after an insect.

For the time I have met Sewa Sewa, it’s actually funny I have never asked him about his fascination with an insect that will never become a delicacy.

The story of Janzi started at an airport in Denmark. Sewa Sewa and friends had been invited to perform. When people at the airport saw the adungu, they stopped them from proceeding with it. The instrument was deemed dangerous for its rugged look and exposed nails usually used for stretching and tuning didn’t help the situation.

Like that, the adungu met its Waterloo at the airport.

Long after Sewa and the group had returned, he tried playing a different adungu, but he noticed it was broken. Since he had not forgotten the events of the adungu at the airport, he had wondered why it had to be the adungu!

For instance, he wondered if the people at that Danish airport would have reacted the same way had the instrument in question been a Balafon, Kora, Ngoni, Shekere, Xalam and Djembe among others.

These instruments are renowned that they are easily recognisable.

Thus, when he asked a carpenter to fix his adungu, he was thinking about something better, appealing and probably less rugged.

And he did it, but then was quick to notice that it wasn’t an adungu. When I first talked to him in 2016, he told me that he noticed that as James Sewa Sewa, he had no rights or mandate to make modifications on the adungu.

That’s when the actual journey for the janzi set in motion.

The Janzi is a two-scale modern, yet indigenous instrument that is made of 22 strings.

Unlike most pentatonic African instruments like the adungu, Kora, xylophone and enanga, among others, the Janzi is tuned in two scales.

A typical scale is a diatonic with seven notes (A,B,C,D,E,F,G), the pentatonic on the other hand uses only five of those notes – with a Janzi tuning in two scales, it becomes the only known Ugandan instrument that is a diatonic.

There is so much such an instrument offers in form of sound and options.

So, why I’m I writing all this?

The Janzi somehow found itself and the founder in Gulu, and somehow, we ended up with a ridiculous idea that was the Janzi Awards – maybe one day I will get time to write why I call it ridiculous. Personally I don’t understand why as an industry we are obsessed with awards. Just the other day there were awards for people that sang about Museveni, then awards for upcoming artistes. Can you imagine!

My problem with awards is that in Uganda, they don’t add any value, it’s not like they will create a buyers or streaming surge. Even in journalism, besides the immediate cheque that may come with some awards, there’s no proof the award comes with respect or a value from the audience.

So I had my reservations when I first read about the Janzi awards. I know, maybe the pitch must have said something about promoting an original and modern instrument using an award show. The same way it was with the Kora Awards and the Kora or the Grammy Awards and the gramophone (it is not an instrument even).

Yet a week to the awards, I imagine half the population don’t even know the Janzi beyond laughable nominations, Operation Wealth Creation and the joke that they are.

And it hurts me to say that, many of my friends are nominated in this thing, and I actually voted for all those I could find on the clumsy website.

But what hurts most is that, the award show is missing the most vital purpose highlighting the instrument that inspired its presence.

It will be bad that after all this, next week, Ugandans will remember Janzi for being a band, an award show that threw itself all over the place technically saying nothing and an insect.