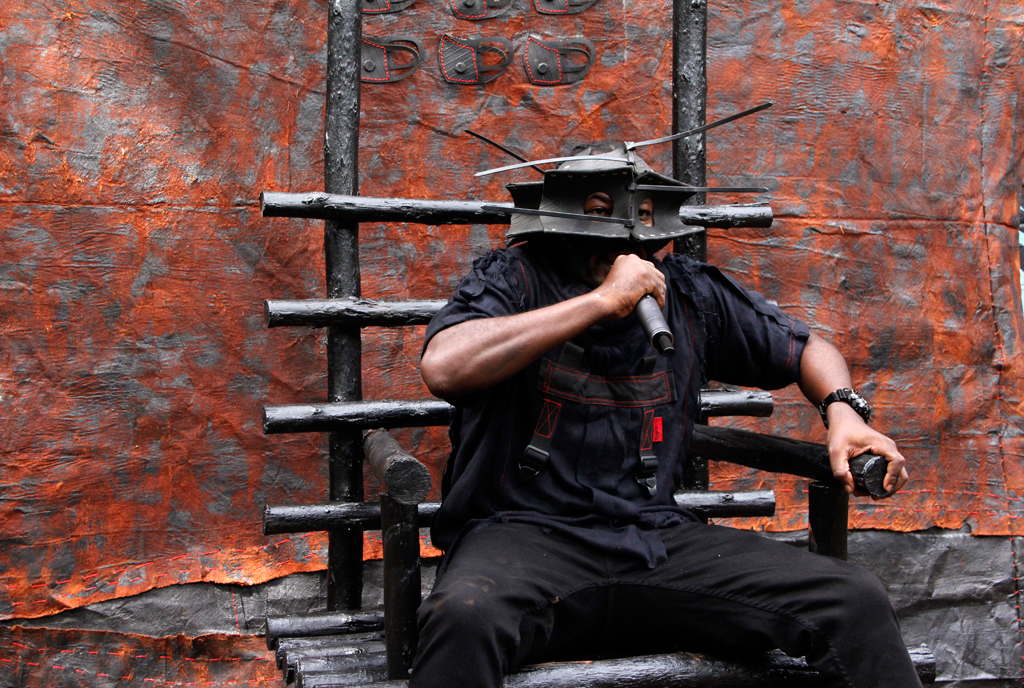 Xenson recites a poem during the exhibition opening.

While many were seeking inspiration from activities such as cooking during the lockdown, Xenson was in the studio going through sketches he had done a number of years ago.

They say art is the mirror of society.
From commenting about social ills or directly speaking to power, art is one force that has been used to communicate to masses, especially those in places under a dictatorship.
Yet, art at times foretells the future, take an example of Kagayi Ngobi’s poems from his debut anthology The Headline That Morning, poems such as In 2065 and the title poem The Headline That Morning may have been radicle in nature, but predicted things we have seen unfold such as reckless shootings by men in uniform to endless corruption enquiries.

The same can be said about Xenson’s latest exhibition, Lumiimamawugwe, which opened on November 7 at the Xenson Art Space in Kamwokya.
Initially, the exhibition started taking shape as early as 2014, before Covid-19. The artist had drawn sketches of masks whose inspiration had been the various Chinese that wore them while going on with their business downtown.

Because of the congestion, traffic and industrialisation in Kampala, it comes natural for some people to wear masks. Yet, when the artist visited Kabale where the air was cleaner than that in Kampala, he managed to appreciate the difference in the two places and thus the idea.
He initially started with a number of sketches and drawings but somehow did not go ahead with turning the ideas into artworks.
As the pandemic took its toll on the country, many people, especially the press, found different ways of referring to the scourge. Commonly, most radio and TV presenters called it senyiga omukambwe, while some called it lumiima mawugwe.

Inspiration
During the lockdown, as many were seeking inspiration from activities such as cooking, many artists were in studio looking through old notes and sketches. That’s when Xenson, real name Samson Ssenkaba, came across a number of sketches he had done a number of years ago.
The best thing was that they responded to what was going on at the time.

What he did with some of the sketches was modification to suit both the Covid-19 situation and the elections, one of the key events that defined a greater part of 2020’s last quarter.
Thus the exhibition looks at two events; Covid-19, which may not have claimed many lives in Uganda but indeed left many countries devastated economically, and an election that was meant to be peaceful yet left many youth that wore the wrong shade of red behind bars.
The exhibition ties both the pandemic and the election as two narratives that influenced each other in many ways. For instance, most of the times, the abuse or observation of the standard operating procedures became the face of an election that turned out to be very violent.

It is therefore not a surprise that while presenting these two topics, one easily assimilates the other but above all, using the mask as a symbol for the past year.
Xenson is an eccentric artist who combines different disciplines of art such as music, poetry, fashion, sculpture and painting among others.
For this particular exhibition, at least many of these sides of him came out to play; for example, he opened the show with a poetry recital as he usually does; but this wasn’t the ordinary recital, it was a celebration of his sophomore album, Yaaye.
So far, only one song, Bugulumu has been released; the song embodies a therapeutic message that tells listeners that as long as they are still alive, they should get used to setbacks and what matters is them getting up after a fall. 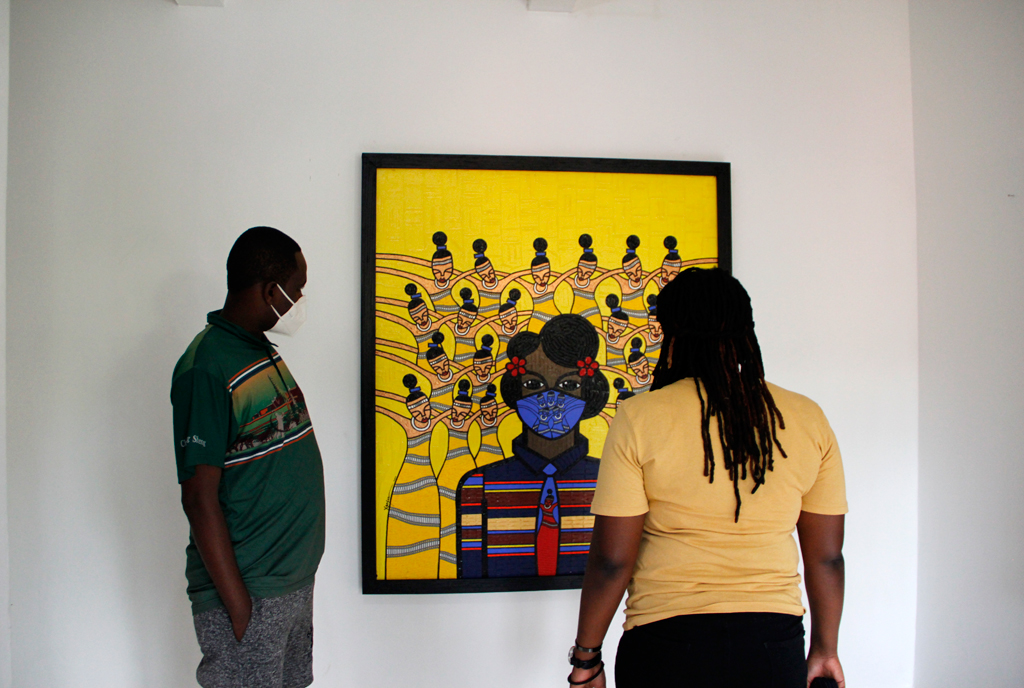 The art
One of the first things you notice when you see Xenson’s exhibition is what experience comes with; he is an experimental artist who has in the past worked with wood, canvas, concrete walls and backcloth as mediums.
In this particular exhibition, he works with backcloth and repurposes old car tyres, paint and red threads to send his message across. The main artwork is hard to miss since it is imposing in nature. He neatly fuses the masks made out of car tyres and stitched together using red threads with the backcloth backdrop partly stained with black paint; probably it represents the death both the election and the pandemic came with.
But the artworks representing the survivors are telling, they are all facing the same direction, yet the background doesn’t seem to offer a lot of hope, even after they have survived all that happened. It is one of those works that seem to be open to interpretation – they survived the pandemic or the election but their future isn’t as secure – poetic.

Expressing self
However, it is the paintings that the artist uses to express himself as well as the audience – these are mostly pictures of people that could be any of us; these people are wearing all sorts of masks.
Some are simply make shifts, others are ill-fitting while others are simply bandanas. Remember, during the elections, masks became a tool of communication, at one point, there was fear that Ugandans were going to end up with government masks that were only yellow.

Xenson manages to capture that part of the story with two paintings, Kaguta and Ssentamu. Both are wearing masks, one is yellow and blue, the colours of the National Resistance Movement while Ssentamu wears a multicoloured mask, probably to represent the opposition as a whole.
The exhibition is still on until January 14, which is also the anniversary of this year’s presidential elections.