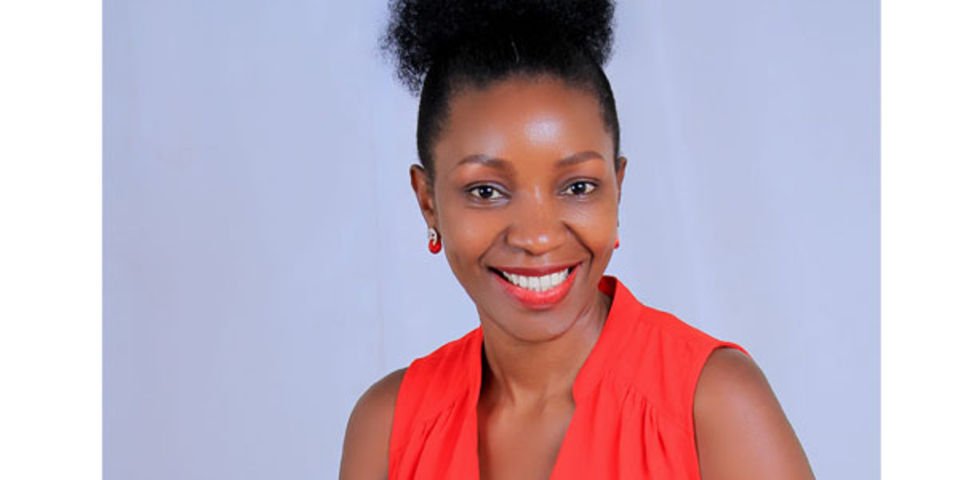 Imagine a beauty queen, who has traversed the world and impacted lives as an activist and a medical doctor. She is also happily married with children, living in a decent home. But gradually, all that comes to an agonising end. Interesting movie script, you think? No thanks. This is Zoe Nakuya’s grace-to-grass story, before she reclaimed her grace, a whole new grace.

“My life had seemed like a beautiful picture to most people, I had finished my first medical degree, and had become my country’s beauty queen all in one month,” Nakuya, the 2002 Miss Uganda winner, narrates in her  new book Choose to Live Happily Even After.

In 2007 she earned her Master’s degree in Health Policy and Planning from the London School of Economics.

She was married, blessed with two daughters. “I was an inspiration for many young girls, women and many parents wished I was their daughter, or at least if only their daughters could be more like me,” she writes.

But that glamour and glitz was cut short, as cracks started showing in her marriage around 2012. Only those closest to her knew that things were falling apart, for a few more years until nothing was left to salvage.

Nakuya separated with her husband in 2015, but it was until 2018 that she got the guts to freely share her story. She interacted with many people; friends and strangers about relationships and parenting dynamics, which inspired her to write this book.

A meticulous piece of literature, packed with life lessons, Nakuya writes like a woman on a mission to change almost everyone who chances upon her book.

She chose the simplest language and the images she paints are realistic. She doesn’t dive into too much detail but what she picks out is easily relatable and drives each point right home.

From her experience, she compiled nine lessons for the African single mother but after speed-reading, I feel this is a must-read for everyone, married, single or neither. In fact, her generic advice answers several questions in several aspects of life, beyond relationships and family.

Full Woman interviewed Nakuya a week before the book launch last Saturday. She says in her desperate search for answers to her ordeal, she believes sharing her story will support many women who are walking the same journey.  Nakuya equates the depth of her marital decline to finding oneself in a collapsed building.

“You have got to accept that there is nothing you can save from the rubble, except yourself and find new shelter,” she writes. And hope that the new shelter will be built on a firmer foundation.

But, she says, it is not a walk in the park. It begins with accepting your current situation and devising means to move on. That too, is as simple as pinning a medal on a shadow.

In one of those days of confusion and indecision, Nakuya retells when she escorted her brother to his fiancée’s family. At the function, each guest introduced themselves with their marital status. And when her turn came, she hesitated. “I was not sure how to introduce myself.”

She was in sort of a marital no-man’s land. Separated from her husband and unsure of the fate of her marriage. But she was wearing her wedding ring. Though it felt awkward.

When she introduced her husband’s name, someone added that she was married. “I was uncomfortable…but I played along.”

When things went further south, Nakuya had no choice but to move on. But she had lost almost everything—emotional and physical.

She was forced out of her marital home, had lost her job, gigs, money and friends. Almost everyone was either accusing or avoiding her as if she was a leper among the Jews of Biblical times.

Contemplating the next step was like being pushed into an ocean yet she did not know how to swim. But she decided to jump into the ocean “with my children, one in my belly and two on my back; I had no choice but to learn how to swim.”

And after picking up her pieces to venture into an unknown territory, she was only sure of one thing: this was the beginning of the end to this chapter -self-pity.

Her only wish? Had she known what she knows now, she would have made the journey shorter.

“I watched my life fall to pieces in a very short space of time until I hit rock bottom. I became jobless. My consultancy contract ended. My publishing business collapsed. I was deep in debt, a huge debt that I had naively taken on for someone I trusted.  My marriage caved in, I went from living in what I called my home to going back to my parents’ home,” she recalls.

From being celebrated she became shunned, sneered at and gossiped about for being utterly broke. For failing at marriage and for becoming a single mother. She was drowning in anger, shame, betrayal, fear, confusion, misery, failure and despair. Her world was crumbling into ruins.

Over the years, Nakuya has learnt that loving others first at the expense of oneself was dishonouring herself. It brought her grave loss. Emotional and material, because some of the people she had sacrificed for could not return the favour when she needed it; in fact, some threw stones at her.

Even then, Nakuya was not a lone-ranger. Booted out of her home, she found refuge in her mother’s home. Now all this once self-sustaining career woman had was her children and few belongings. She badly needed help. But she felt embarrassed to ask for or accept support.

Eventually, Samaritans rescued her, without judging her. With hindsight, Nakuya knows that swallowing one’s pride and accepting support when in need, is crucial in addressing trauma.

But who was her biggest hero in this struggle? “My mother,” she said, as her eyes went teary and her pitch lower, as soon as we asked. She paused, a bit. “She was always on my side; my strongest pillar…” Unfortunately, she passed on in 2017. Her father had died in 1999.

Nakuya considered pretty dangerous acts in revenge. But she eventually quit that den of dark thoughts without doing any harm.

She says the repercussions of a broken relationship are a vicious circle. She always wondered how she could shield her children from this falling debris.

They tried co-parenting, where the girls could spend some days with their father but she says this was littered with conflict.

“Sometime I could see the sadness on my children’s faces as they left to go to their father’s home or as they said bye to him as he dropped them off at my place,” she writes.

This toxic environment of anger, blame, confusion and tension affected the children’s grades at school. Nakuya could not help crying, not for herself. But for her children. The teachers too got concerned and attempted to help mend the broken fences, to no avail.

Nakuya now knows that was a temporary part of the transition. Sometimes, she says, things must get worse before they get better. She cites the first time she openly expressed her anger to her children’s father. Surprisingly, that moment of madness would be the proverbial blessing in disguise.

She made up her mind to create a better, healthier environment for the children. “I wanted them to grow up with a positive attitude about their [single] family set up, no matter what the world deemed ideal.”

Nakuya strongly rubbishes the notion that single-parent settings breed ‘broken’ children. “Those are baseless stereotypes. I know many spoiled children who were raised in mother-father families and many well-mannered ones from single-parent families,” she says adding that the role of a father-figure in child grooming cannot be wished away “but it is not exclusive to the biological father. Even relatives, friends can do it.”

In fact, she adds, if single-parenthood is abominable, why does society soften a bit on single fathers or when a woman has been widowed and not divorced? Double stands, she argues. Nakuya tells her daughters that marriage is great when husband and wife are mutually committed to continue solving the issues between them and build love, respect, peace and harmony between themselves and that children living with both parents under the same roof is a healthy place to be.

However, she adds, sometimes the children are safer when their parents live in separate happy spaces. Hers is a continuing journey, but Nakuya is happy that her girls, the eldest aged 11, are coping well. “They now understand the situation.”

Nakuya and her ex had dated since 2006. But she admits there were fundamental issues they did not address, which eventually split their love like a surgeon’s knife does a patient’s flesh. 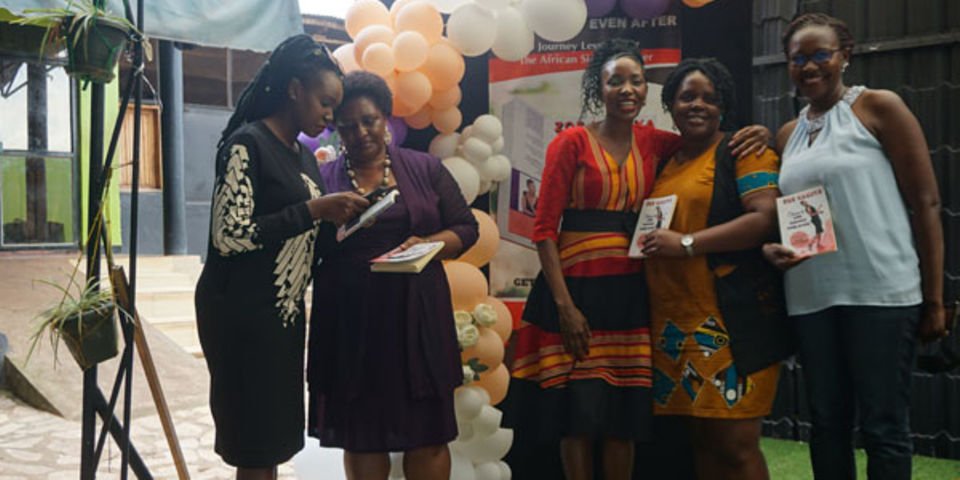 Zoe Nakuya (centre) shares a light moment with her friends during the launch of her book last week. Photos | Phionah Nassanga

In retrospect, the life coach now knows that it is not how long you date your prospective partner, but constructive dating must be based on honesty and trust to build lasting relationships.

“You might be a fan of tennis and I am not, but I have no problem with your choice.” But if spouses disagree on fundamental issues such as one being a spendthrift, at the expense of the family’s progress, Nakuya warns, that such a red flag should never be ignored.  “These are some of the issues you will not pretend about forever. They will recur anytime and breed arguments and later turn into disagreements,” she says.

While dating, she adds, you should be ready to discuss these differences before deciding to make the relationship official.  “A marriage built without trust and honesty will have holes and those holes will eventually show up.”

When a cup of tea is spilt, she says, does it mean you can’t have another? “As long as you have the spices, you can make an even better cup.” Do you read between the lines? Nakuya still believes in love. Only if she finds that compatible partner.

Zoe Nakuya was Rehema Nakuya, a girl raised in a polygamous Muslim family. But during her time at St Mary’s SS Namagunga, she chose to become a Christian.  She also believes that wholeness is not determined by external circumstances and societal standards such as marital status, race, religion,  tribe etc.

This experimental woman, who defies conventional choices, wants her three daughters grow into successful women.  Nakuya is no longer the blaming victim of her past. She calls herself the conscious driver of her life.

“I became jobless. My consultancy contract ended. My publishing business collapsed. I had a  huge debt that I had naively taken on for someone I trusted.  My marriage caved in, I went from living in what I called my home to going back to my parents’ home.” So, how did she cope? What lessons did she learn? ‘‘Accept where you are, shut the door to stigma, forgive and let go, honour yourself, redesign your life story, know you can raise awesome children, choose love, say yes to abundance and trust the process.’’

This story first run on FullWoman

Two weeks ago, many Ugandans learnt about a local film. Loukman Ali’s The Girl in the Yellow Jumper. This was the second time Ugandans...

A Pass once said Bebe Cool paid him a whooping Shs10m to write his African Gal song. BlackSkin also admitted that Katono by Bebe...

As we await the reopening of the economy in January as earlier promised by President Museveni, bars are making amendments to have a clear...