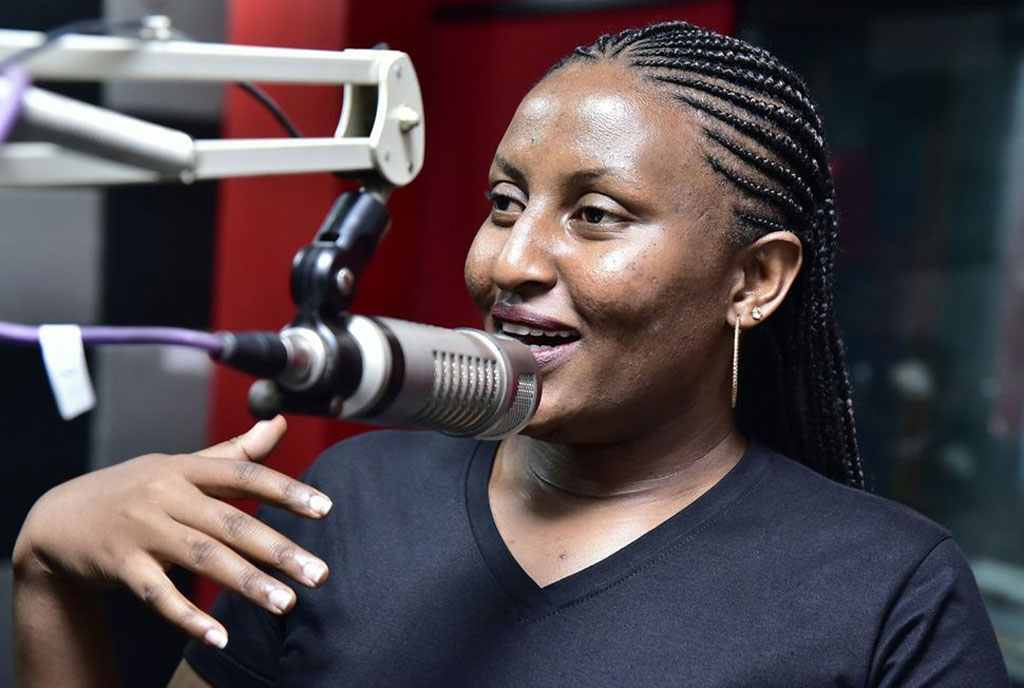 For a deeply introverted woman like Philomena Matsiko Kyamutetera, being petite would just swallow her persona – she would almost go unnoticed anywhere. Yet, if you thought being ‘medium size’ is the blessing that props up the radio and TV presenter better known as Philo, then you haven’t seen her eyes.

They are hyper, if there was such a description, after all, that’s the closest you get when Roger Mugisha, her programmes manager at Sanyu FM, says “she gets hyper here at the radio station.”

Mugisha, one of the pioneer FM radio deejays in the country when FM radio started in December 1993, does not notice much of an introvert in the presenter. But she tends to keep her head down most times, so you wouldn’t notice the eyes but a headphone will almost certainly shout for attention.

That is Philo’s world – a world in which she hears one clear voice, like Peter Cetera says in the pop song by the same title. “It’s one of my favourites, ‘One Clear Voice,’” Philo says. “The lyrical content explains my everyday life. So I relate to it.”

In the song, Peter Cetera says the world can be a place of so much talking, happenings and confusion that cannot allow introspection, but finding the right thing calls for locking yourself up in your own world and quietly listening for those answers that can only come from within.

There’s always that one clear voice calling for you to listen to what you have been missing. And you will only hear it if you pay that arduous attention.

Diana Sikora would swear she has no doubt the one clear voice in Philo’s ears is a calling to radio. She says of her childhood friend from Bushenyi: “She would know the latest songs and miming them and also dancing were her thing.”

Foray onto the airwaves

From listening to One Clear Voice, Philo now has to serve a literally clear voice to listeners and viewers. On Sanyu FM, she presents The Lounge every weekday and Wind Down Zone on Sundays, while she also anchors prime news on BTM TV.

So is she where she dreamt of being? “That may sound touché but my ultimate goal has been to join TV and majorly anchoring. I used to listen so much to radio (Sanyu and KFM) while growing up and I admired those guys. Years down the road, I’m at Sanyu as a presenter and anchoring news on BTM TV, so I’m on my way to the big media house I guess,” she says.

At 28, the Mass Communication graduate from Uganda Christian University has had to nurse her career dreams. A bit of luck was her first start. Her father, Emmanuel Kyamutetera, operated a restaurant and falling in as a cashier in her A-Level vacation came naturally.

And that natural bit wafted into payments. “If you asked me where I put that money, I don’t remember,” she chuckles. After graduation, Philo joined the East African newspaper as a correspondent before her father’s namesake Muhereza Kyamutetera lured her over to The CEO magazine to work as writer and social media manager. “The East African paid per story that ran but the payment was actually decent then compared to most media houses in the country,” Philo says.

After sharing four years of her time between The East African and CEO Magazine, Philo got her dream on air in Mbarara with Crooze FM. The CEO was paying her well and offered her stability as a full-time writer, she says, but she needed to hone her skills in the real career she dreamt about all these years.

And, at Crooze FM, she began to believe more in herself. Her big break came when Sanyu FM was revamping after laying off several staff. They started a talent search dubbed Hot Mic in which potential disc jockeys and presenters participated with the winner guaranteed a job at the country’s oldest private radio station.

Singer Ethan Kawuma won the challenge after shrugging off stiff competition from Timothy Code and Philo. It was then that Chris Ireland, one of the pioneer presenters at Sanyu FM and manager, announced that Rajiv Ruparelia had been impressed by first and second runners-up. There were jobs for them, too.

For more than a year, Philo has been working the shifts. Like some night, she gets home at 10.30pm. Such is her routine on radio and TV, four days a week. The other three, she gets home at a “decent hour of 7pm.”

She wants to be Winnie Byanyima and Nancy Kacungira in one package because the two give her the real positive vibes. The reality of the work shift versus life shift is one Philo would rather not invest her choice in.

Yes, she would love to have a family like yesterday but she cannot commit to making the choices just yet considering that a career like hers and starting a family are a difficult balance.

As that former cashier who was happier to pick lessons from the job than the pay, Philo appears to have her collars in place. She is unafraid to wade into the idea that most presenters are paid in “wardrobe and make-up currency” with a semblance of salary or allowance as the top up.

Without divulging her pay cheque at Sanyu or BTM, Philo believes hers is a career shadowing the mainstream journalism, where passion is the consolation used by many employers to keep their foot soldiers going about their duties without yawning too loudly for all and sundry to notice.

“Media will open up a platform for you to make money from other ventures and give you the exposure and side opportunities to grow your network and social capital. So be shrewd and capitalise on these blocks because a time will come when you are not relevant.”

There is a second verse in Peter Cetera’s One Clear Voice. Here, he says he is always searching for which path to take even while so afraid to make mistakes sometimes. The reality of life is that those who land on something get so comfortable and forget all about initial pursuits. Philo sees this as putting the blocks that would otherwise erect themselves in one’s path in form of the many challenges.

Philo says the earlier one gets to grasp the issues, the better, otherwise they would be blinded by the same blocks and end up where they started – no progress.

Sometimes that comfort zone is driven by the fear to venture further but like the song says, somewhere inside you, forces stronger than your fears will emanate like the sound of music to your ears.

For Philo, Breakthrough TV Network, one of the newest television stations, is another learning platform. She wants to become an influential figure and invest in supporting the youth through nurturing and shaping talents.