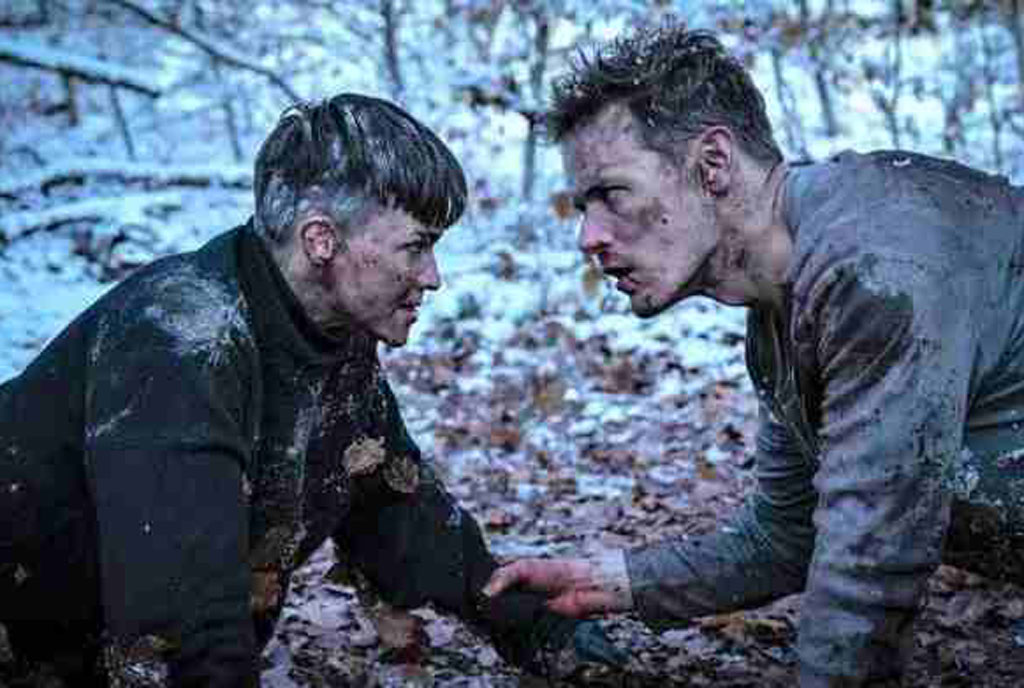 SAS: Rise of the Black Swan starts with those reflective lines that grip you. Tom Wilkinson is telling us about how successful psychopaths are, and how rare it is to find one who is capable of love. Turns out his character, William Lewis, is familiar with being a psychopath since he is the leader of the Black Swans. The Black Swans are a mercenary group, the British Prime Minister and his peeps have hired to deal with a small village that is standing in the way of an oil pipeline. Lewis’ right hand person is his daughter, Grace (Rose) who gets thrills from killing, complete with a sneering grin. When a video of the Black Swans’ business in the village surfaces, the Prime Minister decides to betray the group.

Elsewhere, Tom (Heughan) an affluent and aloof-ish member of the SAS, a special unit in the British army, is making plans with his girlfriend to visit Paris. Their train ride to Paris is interrupted by Grace and the Black Swans who are on a blackmail mission against the government.

The biggest pull to this movie for me was seeing Sam Heughan away from Outlander, and Ruby Rose being the badass she always portrays whether as a protagonist or an antagonist. Rose did her best in this film. She is those villains you know are bad yet you cannot help liking her. But she had very little to work with. Heughan on the other hand is confusing. We get that he is supposed to portray a psychopath but eh… he might as well have been a model on a fashion page. Didn’t get a lot from him.

SAS:Rise of the Black Swan, which was also released as SAS: Red Notice is one of those movies with a nice poster and trailer. But it is not outstanding. Stream only if you have nothing else to watch or just to feed your curiosity. Yet I won’t get shocked if it has a sequel. *Palm to face*