Hundreds of music artistes, promoters, and comedians from all over the country have been camping in Gulu in wait for the reported bailout cash from the Operation Wealth Creation chief coordinator. 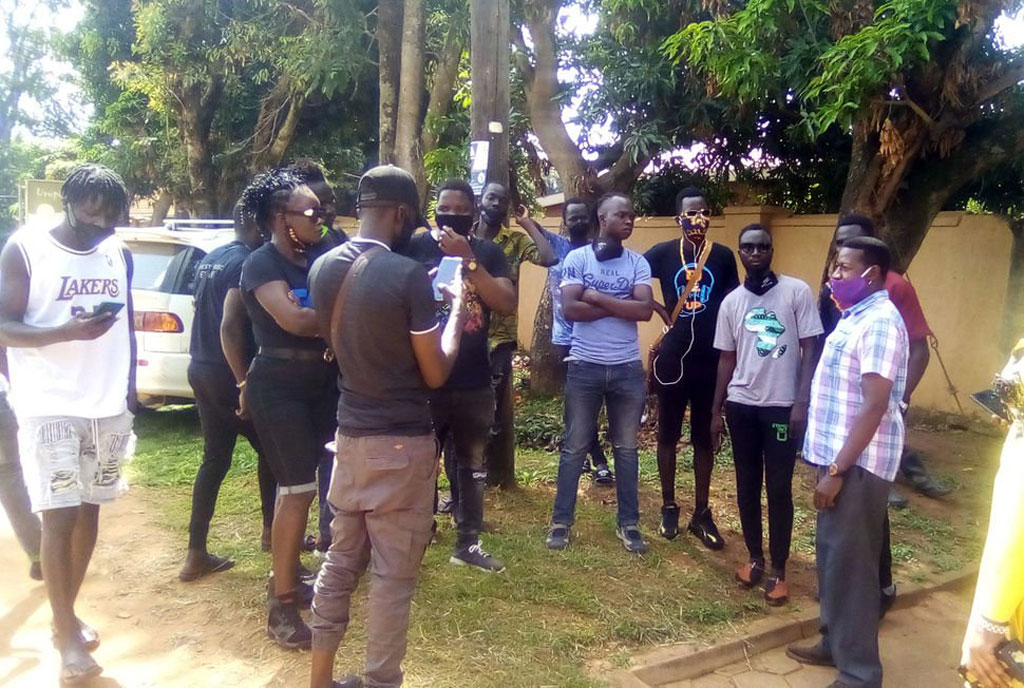 Local artistes from northern Uganda camp outside Acholi Inn in Gulu after they were blocked by security personnel from accessing the venue. They were later allowed in by Gen Salim Saleh. PHOTOS/COURTESY

A scramble among musicians and other players in the entertainment industry to reap big from an expected Covid-19 cash bailout spearheaded by Gen Salim Saleh has sparked off fights.

Several artistes, who spoke to Saturday Monitor ,say the money is being given out by Gen Saleh, the chief coordinator of Operation Wealth Creation (OWC) programme.

But the managers of OWC, a government initiative, at first dismissed the claims a fortnight ago.

The OWC officials then said they had no plan to dish out billions of shillings to any artistes handpicked for special Covid-19 cash relief.

But the recent turn of events have forced the OWC officials to concede they are currently engaging the artistes.

“It is true the artistes are camped in Gulu, we mobilised and trained them but we don’t give out cash. Although we have trained them, we are working very closely with the Gender ministry to help them, but we have no cash to give them. Perhaps the Gender ministry can explain,” Maj Kiconco Tabaro, the OWC public relations officer, said.

“We have found it appropriate that we engage our colleagues in the entertainment industry to deal with this crisis that we are all facing and forge ways to prevent such vulnerability in the future,” he added.

Maj Tabaro said OWC has intervened in the Covid-19 crisis, by preaching mind-set change and undertaking training workshops to empower artistes and build their capacity  to earn a living in the future.

But photos that have trended online for the past three weeks show hundreds of music artistes, promoters, and comedians, among others from all over the country, camped in Gulu and holding several meetings among themselves in wait for the reported bailout cash.

At the Gulu meeting on Wednesday, close to 200 artistes crowded The Hub, a hangout in Gulu City. At the meeting, music stars Daniel Kazibwe, alias Reggae Dee; Mansur Semanda, alias King Saha, and Moses Ssali, alias Bebe Cool, appeared to be in control of the meeting until it was disrupted in the wee hours by a downpour at about 3.30pm.

Although there is no clear record of specific sums the artistes are crowding for, or set to receive, a document dated May 26 and  authored by United Music Superstars Association that this newspaper saw, indicates that the artistes are seeking Shs11 billion. The document was signed by a one Joseph Jemba.

Another document by the same group in which musician Joseph Mayanja, alias Jose Chameleone, is said to be a key member, wrote to Gen Saleh and OWC, requesting for a stimulus package of Shs9.471 billion.

The document indicates the money is meant to bail out members of the association following individual losses the artistes suffered from the ban on concerts following the outbreak of Covid-19 in March, 2020.

A source close to the Gender, Labour and Social Development minister confirmed receiving the said letter, but said they will review it and make a decision.

Between July 23 and 31, a total of 46 artistes camped in Gulu for a retreat, dubbed, ‘Strengthening the Cultural and Creative Industry in Uganda’. A copy of the certificate issued to one of the participants, Bebe Cool, indicates the artistes were equipped with life skills and knowledge on business management.

The certificate signed by Gen Saleh and Ms Peace Mtuuzo, the junior minister for Gender, Labour and Social Development, bore the logo of both OWC and the Uganda National Cultural Centre (UNCC), formerly the National Theatre.

But on August 5, during the graduation ceremony of the artistes at Acholi Inn in Gulu City, Maj Gen Leopold Kyanda, the UPDF Joint Chief of Staff, Government Chief Whip Thomas Tayebwa, and Ms Mutuzo, showed up at the closed-door ceremony. It was not immediately clear why the meeting had a blend of big guns from the military, government ministry, ruling NRM party and Parliament.

Entertainment industry players and observers say it is a calculated first-step to mobilise the artistes and make them beholden to the NRM party schemes. But the OWC-organised artistes’ meet has also drawn criticisms, with musician-turned politician, Mr Robert Kyagulanyi, better known as Bobi Wine, criticising his colleagues for turning into ‘beggars’.

Two other artistes, who spoke to Saturday Monitor on condition of anonymity, said they turned down the requests to travel to Gulu.

But Bebe Cool, an unapologetic supporter of President Museveni and his ruling NRM party, rebuked Mr Kyagulanyi. He said they went to Gulu to meet the chief coordinator of OWC, whose role is to include all Ugandans into the prosperity programmes.

Artistes—musicians and other creatives, including writers, painters— have often had an uneasy relationship with the state. During the last 36 years of President Museveni, this fault-line became more pronounced when Mr Kyagulanyi threw his hat in the ring of elective politics in 2017 and running for President early this year.

At the Gulu event, Gen Saleh lectured the entertainers on cashing in on their creative efforts, which has remained a sticking issue because of absence of intellectual property rights body as provided for under the Copyright and Neighbouring Rights Act, 2006.

Mr Tayebwa told the artistes to avoid asking for free money, but rather establish a savings and credit cooperative, which can be capitalised by Uganda Development Bank (UDB) at a comparatively lower interest rate.

He said government is eager to have the artistes self-regulate in order to benefit from the several government programmes.

Although the musicians have attended several meetings in Gulu with Gen Saleh since last month, it appears the group meeting and negotiating with Gen Saleh includes only artistes from central Uganda.

This has sparked off an uproar from artistes from the northern region, who cited discrimination, arguing that there was no way artistes from the central region could camp in Gulu unannounced and strike a deal with Gen Saleh without involving them.

To catch up, in a space of only two weeks, artistes from the Acholi sub-region scrambled to form and registered two rival music associations. The artistes have since clashed over which of the two groups should be recognised by Gen Saleh.

The Acholi musicians are now pushing Gen Saleh to similarly set aside a special package for them since all of them have been hit hard by the Covid-19 lockdown.

News of the presence of music stars from central Uganda in Gulu City first rocked northern Uganda when videos about a music show held by Chameleone in Gulu despite the Covid-19 lockdown, emerged on social media three weeks ago.

Days after, their counterparts from northern region caught wind of information that the artistes had camped in Gulu to meet Gen Saleh.

On the D-day, drama erupted outside Acholi Inn following a siege by local artistes who attempted to crash into the venue but were blocked by security personnel. Saturday Monitor has established that the ceremony was planned for only artistes who had undergone training, but more than 100 others led by Lucky Bosmic Otim, barged in, forcing a standoff with security personnel.

The artistes were only saved by Gen Saleh, who upon arrival, ordered the UPDF soldiers to allow all of them into the meeting hall.

By the close of the meeting, the ceremony that was planned for 46 artistes and 10 other officials, including ministers, ended up with  400 participants.

Although it is not clear how much the 46 trainees received during their stay in Gulu, each of the participants at the final ceremony walked away with between Shs500,000 and Shs1 million.

One artiste, who spoke to Saturday Monitor on condition that he  is not named, said they stormed the venue following reports that the artistes had camped at Acholi Inn to get money from Gen Saleh.

“There is too much secrecy in this industry and the artistes from Acholi were not organised. While they were scrambling for the money, they were not aware some of us were receiving training for a bigger package,” he said.

Another said: “The organisers of the workshop told us they had planned for only 46 artistes from Kampala and Gulu, but we ended up with more than 400 artistes from both places.”

“We stayed until 11pm into the night, there was nothing except the certificate given to the 46 people. However, I personally signed for Shs500,000 for attending the ceremony. None of us knows the criteria used to determine who gets how much money,” she said.

At the ceremony, only selected artistes were allowed to speak, with the toss going to Bebe Cool, Jose Chameleone, Pallaso, and Romeo Odong, who spoke on behalf of artiste from northern region.

“I remember Bosmic Otim rose up to speak, but was denied an opportunity,” the source said.

Justine Simpleman Obol, one of the local artiste, said the disunity among artistes from Acholi is denying them the chance to benefit from any initiative meant for them.

“How can a training happen in Gulu City for two weeks and only few artistes from Gulu get to know about it? We suffer disunity and have poor information flow and parallel groups, all aiming to unite the artistes from the northern region,” Mr Obol said.

“All these associations don’t have any clear agenda; how I wish they organised beyond thinking of getting money and had clear agenda, but not self-entitlement,” he said.

But Bosmic Joyce Otim, the president of Northern Entertainers Association (NEA) said they were informed of Shs11b allocated to artistes in northern Uganda, but claimed some people were bent on sidelining them.

“As artistes from this region, the person giving the money is based here and we should be given the money first then the rest can follow. We are aware of the money that all the artistes are supposed to get from OWC and to the best of my knowledge, this money was allocated to help artistes in the art industry where all artistes belong,” Mr Otim said.

“We as NEA are a team that is very organised, we don’t want people to keep saying we are not organised as northern Uganda artistes. And if this money is meant for us, we must get it no matter how,” Mr Otim said.

He said they are not beggars, but demanding what is rightly theirs as artistes.

“If you want to call us beggars, it is okay, but artistes from northern Uganda have been using music for so many good causes such as peace during the Lord’s Resistance Army (LRA) war, but have never been appreciated for their great work,” he said.

In March, the artistes had failed to meet Gen Saleh over a stimulus package to cushion them from hardships of Covid-19 lockdown.

Amid the politics, the Uganda Musicians Association (UMA)—an offshoot of the trade union, National Union of Creative Performing Artists & Allied Workers— established in 2017 to bring together musicians, producers and artiste managers, has gained traction in recent months and has been crusading for unity of artistes.

OWC director of operations Sylvia Owori described the Gulu meeting as a stepping stone “to realign ourselves.”

“All other associations purporting to represent the interests of the musicians,” she noted, “will now fall under UMA.”