Rap game: He rhymed in his 2013 tune “Nina Plan” that his plan was to be easy, and be the rapper to educate, entertain and make you love to speak Luganda. Today, living a simple lifestyle and riding his bicycle to a studio to record music amid travel restrictions, St. Nellysade’s poetry continues to speak about social life, writes Denis Nsubuga. 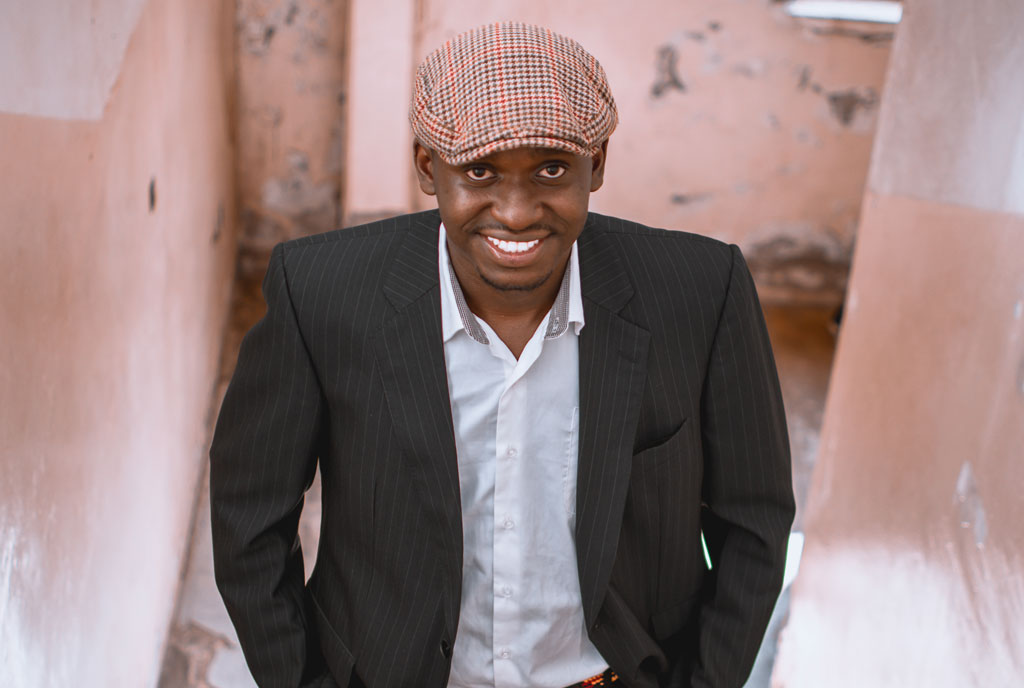 “You’re looking for Posho, but the millionaire is looking for air to breathe,” St. Nellysade gibes in his new track, “Katonda Awambye”. In the three-minute tune, he lyricises in Luganda about the struggles of living in the time of a deadly pandemic, demystifying it as a takeover by God.

The rapper choruses that God, alongside His army, has taken over the world. He believes it is God doing all the things the world is witnessing to see those who still believe in Him.

“Katonda awambye”, coming out amidst a 42-day lockdown, consolidates Nellysade’s commitment and storytelling prowess in not only addressing issues in society, but also educating and entertaining his steadily growing fanbase.

Nellysade, real name Nelson Nsubuga, has been active in the music industry for over a decade, doing hip hop, a locally budding music genre. In the local hip hop community, he is regarded as the poster child for uniting the old and new generation of rappers. But it is his Luganda poetic storytelling that has garnered him respect and a following over the years.

Born in 1988 in Kampala, to Edward Lule and Jane Nantongo, Nellysade’s talent roots from his mother. “My mother is a poet. When I was young, she used to come back from the market where she worked and recite some poems from her books. Sometimes I would also get the books and read through. I was always fascinated by the way she crafted her words to make scenes,” he recalls.

The poems kindled his interest to become a poet. After primary school at Buganda Road Primary School and St. Joseph Primary School, Nazigo, he joined Old Kampala Secondary School for O-Level. Although he had started composing his own short poems in Senior One, Nellysade remembers reciting his mother’s poems to friends.

It is also here that his love for hip hop started. “Whenever I saw people miming other songs, for me I wanted to mime hip hop. I always wanted to do a song by 50 Cent,” Nellysade recounts of a popular music genre whose roots are traced in the 1970s in the United States by African Americans.

He discovered some local rappers, such as the duo Slyvester and Abramz, Lyrical G, Navio and Babaluku. Around 2007, while at Yale High School, Nellysade recalls a revolution happening when GNL Zamba made it into the mainstream.

Zamba’s fame gave Nellysade and fellow youngsters a ticket to dream. They would meet at various hip hop events around Kampala. Their lifestyle, he observed, was mainly influenced by the African American hip hop culture, and freestyle rap battles, where artistes rap ad lib, were the climax of the events.

“I always knew that I should come with poems in my head and recite them for the audience. I didn’t have that art of seeing things and creating a story about them there and then,” he admits. And that meant that he lost the freestyle battles, which were largely the yardstick for who should carry the tag of a rapper.

But, armed with poetic skills, it is these competitive events, such as Hip Hop Canvas and WAPI, which helped him to not only make important contacts and learn skills, but also showcase his storytelling ability. He met, performed, and recorded with the likes of Bigtrill, Gravity Omutujju, Don MC, Keko and Bunny MC.

In Senior Six vacation, he learnt barbering. He would use part of his tuition fees at Kyambogo University where he enrolled for Procurement and Supply Chain Management to start a barbershop. It is from the barbershop that he got money to finance his musical endeavours such as recording and attending shows.

In 2010, he was introduced to the Makindye-based Bavubuka Allstars, a group of youth led by legendary Lugaflow artiste, Babaluku. As Nellysade adored their skill in freestyling, they revered his poetry. On his part, he was determined to learn from them.

“We connected so easily that we formed a crew called Luga Flow Army, including Cyno MC, Burney MC, Fasie MC, Foever MC and myself. We combined our different talents and started recording songs,” says Nellysade, who was then referred to as Kakubiddewa, owing to his title with PAM Award winning rapper, Lyrical G.

In Luga Flow Army, where they released songs, including “Competition”, “Egye Lyo”, “Tuvudde Wansi”, the young rappers documented their journey and the life of an underground hip hop artiste. Besides learning about recording and the business of music, he thought of doing solo projects.

Paying Shs80,000 in instalments at the Urban Aksent studio in 2012, Nellysade did his first solo titled “Nzijjukira”, telling the story of his exploits in the challenging hip hop scene.

“It was my first track to play on the airwaves, mainly on Hot 100, and Sanyu FM. People loved “Nzijjukira”. It gained me fans. They would call me Omutaputa (a translator), because I would use old-age Luganda,” he recalls.

Consequently, the single motivated him to record a 16-track album titled “The Transition (Okutaputa)”, which he released in 2013. In the era where radio, TV stations and to a certain extent, digital was commanding the music consumption behaviour, Nellysade sold his music on Compact Discs.

Selling out more than 500 copies at 15,000 was awakening as it was refreshing. It did not only help him realise there was a fanbase, he was glad that his music paid the much needed bills. That was inspiration for more.

The same year, he released ‘Love Story’, a true love story of a break-up with a girlfriend, which captivated fans. He attributes the success of the tune to its varied feelings capturing sad and happy moments of a love affair.

“It was so deep and creative, the first song I put all my feelings into,” Nellysade says of the song that started his second album titled “Stories of Elevation” (Omulondo n’Engero), which he released in 2015. 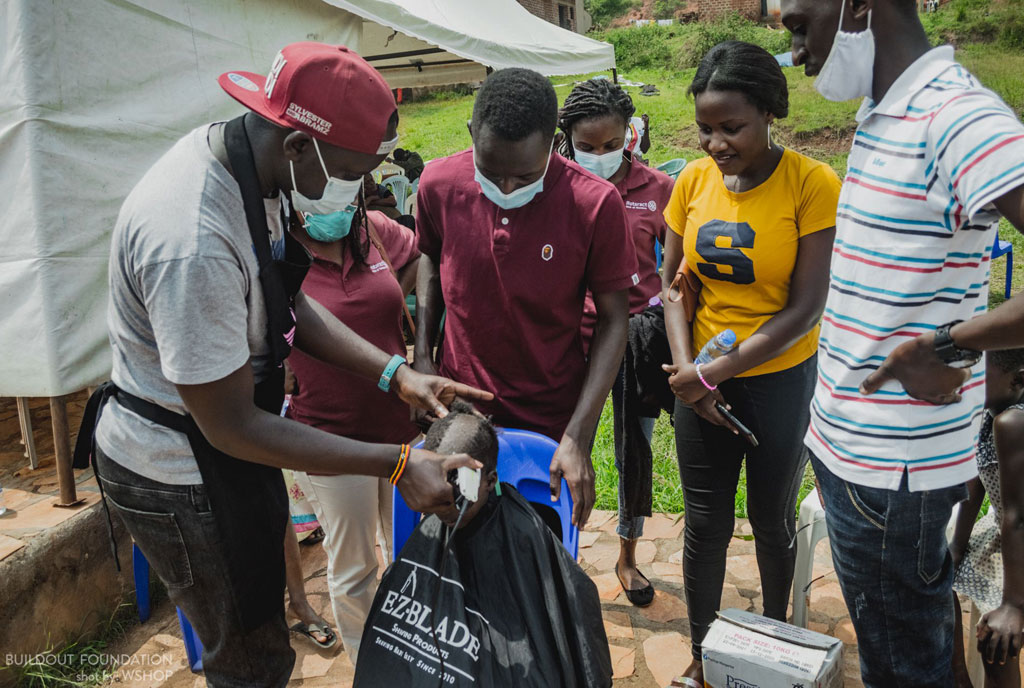 Spreading love. Once he discovered his skill in barbering, St. Nellysade started reaching out to communities as a way of giving back.
PHOTOS /COURTESY

The album whose songs, the rapper says, were intended to elevate the feelings of the listener, won the Album of the Year in the inaugural UG Hip Hop Awards in 2017. He has since won and been nominated in various awards.

Since 2015, Nellysade has wrapped up every past year in a tune he titles ‘Rap Up’. In the project which won him Lyricist of the Year award for “Rap Up 2017”, he recaps the major events that have happened in the year.

“My focus was on the comical aspect, which would entertain and make the listener smile. I do more of the light moments and a few sad moments,” he says. As the project gained popularity, Nellysade says, Viboyo, who over the years had also produced his version, suggested a collaboration, which resulted in Rap Up 2018.

Nellysade is currently working on his third album, in which he has made different collaborations with artistes from other genres, such as A Pass, Nutty Neithan and Solome Basuta.

“I did such collabos because as you grow up you realise that you need the audience to grow. You cannot keep yourself in a cocoon. Secondly, everybody needs each other in the industry,” he says.

He has performed at various local and international festivals and corporate events, in different cities, including Kenya, Tanzania, France, Zurich, Switzerland, and Belgium.

“I have been lucky to perform in different spheres of life. Today they called me at a telecommunications company event, and tomorrow, I will be in Katanga for a community event,” he adds.

He, however, admits that hip hop artistes like him are not frequently booked like their mainstream music counterparts. So, besides the physical and Internet album sales, they sell branded merchandise such as T-shirts and caps.

After the second album, Nellysade got involved in different mentoring projects. He got an ambassadorial role for the End of Weak Championships, a US-based global hip hop competition, where, alongside other hip hop artistes, he was tasked to find a champion to represent Uganda at the grand finale.

He also had a rap and writing class for hip hop youngsters at Breakdance Project Uganda, Sharing Hall in Nsambya. He has been the producer of the MTN Rap Battles, a nationwide competition that aims at discovering fresh hip hop talents around the country.

He says the influx of young people indicates industry growth. “I enjoy seeing a rapper being paid for their work, because I know the woes of a rapper in Uganda,” he says, quick to add, however, that there is a lot of copying which is likely to make artistes sound the same in long run. 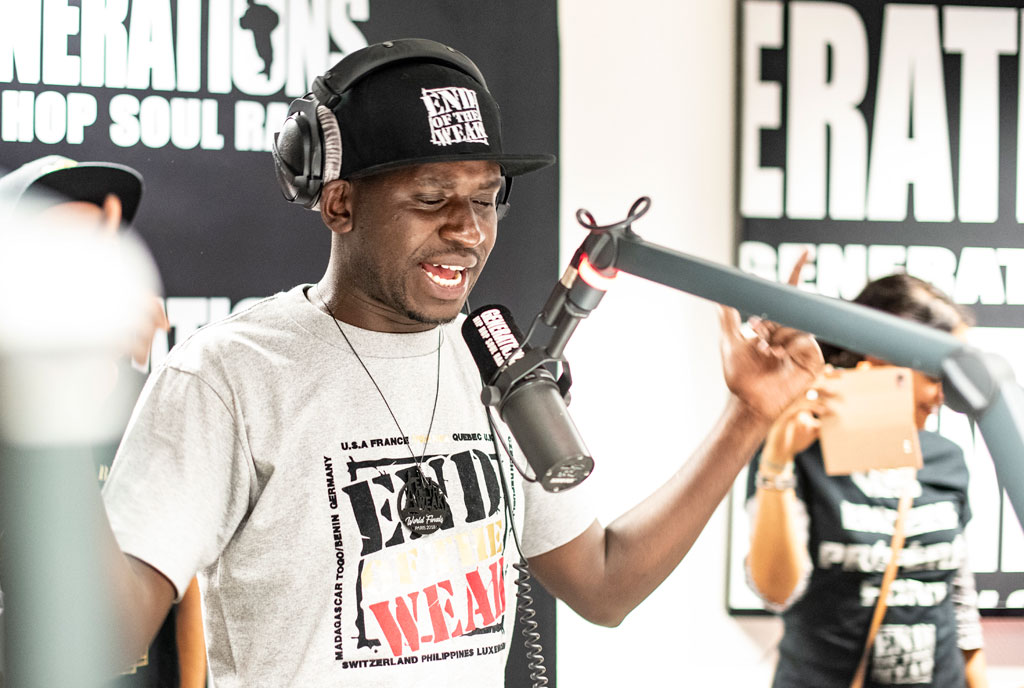 Nellysade has since 2016 recalled his passion for being a barber. “I always wanted to give back because people were supporting me. I realised I could use this skill of barbering. I realised there are many people, especially in the slums, who can barely afford a haircut. You find a child is out of school for a week because their parents cannot afford a haircut. I decided to reach out,” he says, adding that he founded the Build Out Foundation with the aim of giving free haircuts.

Working with an over-10 member team of volunteers and fellow barbers, he has used the reachouts in slums of several areas, including Mpererwe, Nansana, Naguru, and Karamoja, to also help equip youth with barbering skills.

“Many don’t have jobs, so when you train them, they can start a salon in the future or go to a salon and get a job. In fact, I have trained many who are now employed,” he mentions.

Every month, they create a timetable according to the communities’ needs.

In the beginning, Nellysade says, mainstream radio stations did not appreciate their music, but fortunately, that has changed and they are increasingly gaining airplay. Whereas it is the digital era, Nellysade says it is difficult to make money off the Internet in Uganda, especially because it is expensive.

He says Covid-19 has killed most of the money-making avenues, including projects such as End of The Weak. He relays that he mostly survives on savings and the mercy of friends. “It has taught us other options. We always thought you should sing and get paid. I didn’t know I would do farming. It is not good to only think of music,” says Nellysade, who got his name from his lifestyle.

“I grew up with people who viewed me as a saint. They were drunkards and drug addicts but I have never tasted any. They kept on calling me Saint, so I adopted it,” he concludes.

Hip hop is a competitive industry, making it prone to division. What Nellysade does is bring it together through collaborations. Many in his style, Luga Flow, are taken away by love songs, Nellysade does that, but he also is keen on social commentary. Above all, he is sharp with his pen. His lyrics are magical.

First, he is an amazing storyteller. On top of that, he cares about young people. We have been with him in different communities promoting personal hygiene and his passion is seen in whatever he does.