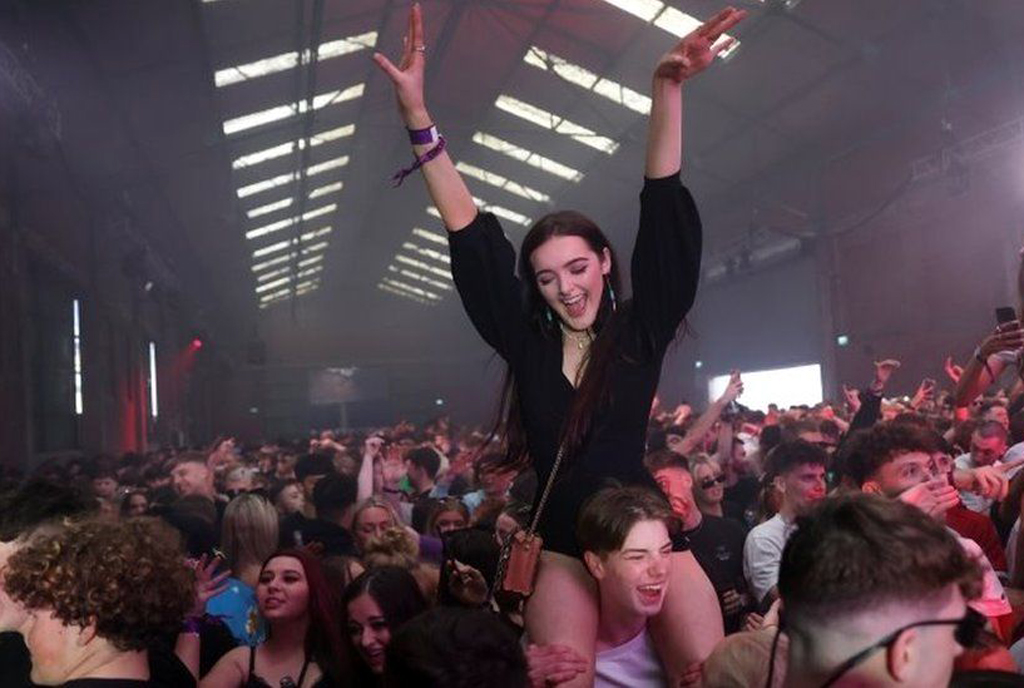 Crowds in sparkly dresses and summer shorts counted down to one minute past midnight, then erupted in celebration as Bar Fibre nightclub opened its doors in showers of confetti.

The easing of virus restrictions in England on Monday was a major cause of celebration for nightclubs, which have been unable to operate since March 2020.

British tabloids have called Monday England’s Freedom Day, although the surge in virus cases has prompted widespread concern among scientists and officials about the advisability of lifting all restrictions.

But for the clubbers filling Fibre in the northern city of Leeds in the early hours, the chance to experience nightlife again was exhilarating.

“This is a special moment, this is freedom,” announced a DJ.

The club was set to stay open to 6 am, with some comparing the atmosphere to New Year’s Eve.

“People are treating it like a very special occasion, like a New Year’s Eve type of affair. Freedom Eve is what we’re calling it,” said the owner Terry George, dressed in a black sequinned tuxedo.

“We’ve got a packed house.”

George handed out single-use facemasks on the dance floor, but there were few takers.

“I thought, well, we missed New Year’s, so why not come out and celebrate?” said Nicola Webster Calliste, 29, who wore a cloth mask as she stood in line outside.

Lorna Feeley, 44, was beaming and said she was “absolutely ecstatic” to be going out again.

Those whose livelihoods depend on clubs welcomed the move.

“The last year’s been really tough,” Aaron Sinkia of The Cuckoo Club in London told ITV television, saying he and his staff had been supported by a government furlough programme.

“Now to be able to come back and to open and operate how we used to is a good feeling.”

The Night Time Industries Association, which represents businesses such as nightclubs, tweeted that it was “great to see the sector reopening” and “amazing to see the emotional outcry… from people who have missed clubs and venues”.

Peter Marks, chief executive of Rekom, which operates 42 late-night bars and clubs, told Sky News he was pleasantly surprised by the rush to the dance floor.

“Good old hardened clubbers! I was surprised how many people bothered to come out at one minute past midnight,” he said, predicting Monday night would be even more popular, with the company’s venues already 70-percent pre-booked.

Nightclubs do not deserve their reputation as potentially “super-spreader” settings, Marks argued.

“We do not believe we are in any way dangerous, any more than getting together in any other setting.”

He argued that clubs have “amazing ventilation”, due to the fact that previously people smoked inside and shows included pyrotechnics.

Judge Jules added that people tend to come to a nightclub for the whole of the evening, while pub clientele is constantly changing.

Nevertheless, researchers for a government pilot programme of test events found that two indoor dance nights in Liverpool with more than 3,000 attending in April and May had poor ventilation.

There were sustained higher levels of carbon dioxide from dancers’ breathing by the stage, their report said, calling this a “cause for concern”.

Some said they still felt apprehensive at the government’s move to reopen clubs as cases soar due to the Delta variant prevalent in the UK.

Shopping in London, Hannah Mordi, 34, told AFP she had seen the reports of people out dancing and “that felt really great and really positive.”

But at the same time, “it’s kind of tainted a little bit, because obviously (infection) numbers are going up,” she added.

“There’s a kind of overhang of doom and gloom.”