The Journey: We have seen the President rub shoulders with artistes in the recent times more than he did in the past. What has been the catch and when did it all begin? Andrew Kaggwa writes. 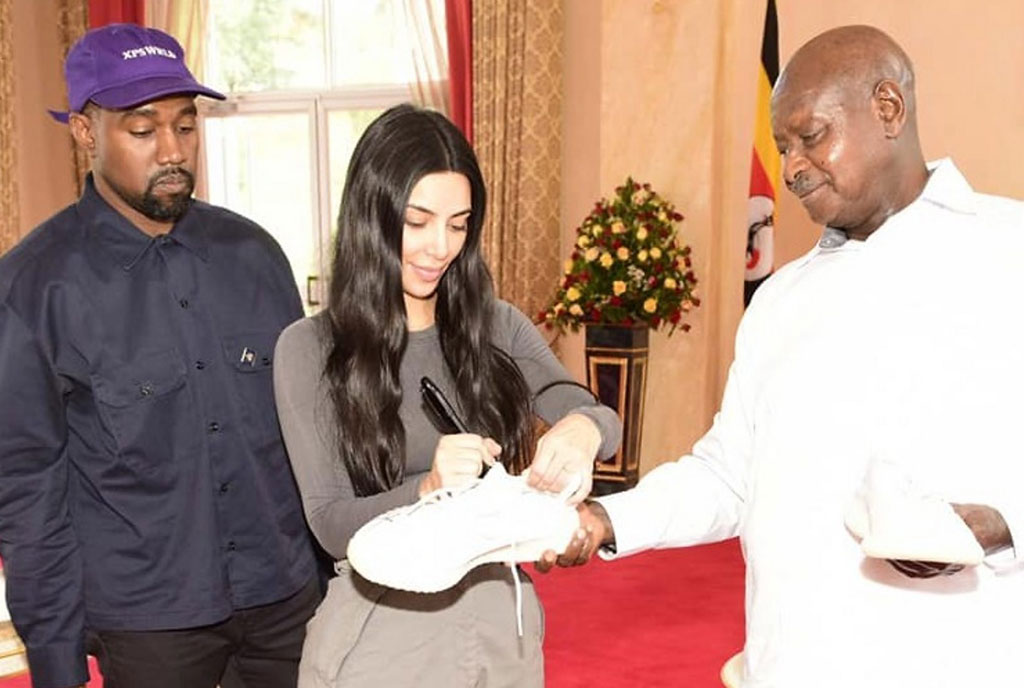 In 2010, Uganda was gearing up for an election. President Yoweri Kaguta Museveni was the National Resistance Movement (NRM) candidate, it was the fourth time he was a presidential candidate since 1996 and the third time he was facing off with his former physician, Dr Kiiza Warren Besigye.

An election between two former friends that have been at it for at least two elections was supposed to be an ordinary one – okay, one had to be arrested various times…which is a script that is not really new.

But then, as we were watching the election take shape, something happened. One of the candidates, the incumbent, Museveni released a song. It was not an ordinary song, it was an urban upbeat clinically-produced riddle with snare sounds and engineered to sound like hip hop songs that were being released at the time.

Apparently the song was accidental, like many works of art. Legend is that the man was reciting the riddle for a few youth that recorded it, looped him asking, “You want another rap?” and just like that, the tone of the 2011 election had been pimped.

But this was just the beginning of a relationship between the Ugandan president and the local art scene. Some people may choose to believe it was just music but it is because they intentionally forget that people such as Balaam, comedians such as Herbert Ssegujja Mendo would later catch the President’s eye.

The 2011 election opened gates for an industry that despite lacking structure, had built both careers and egos. In no time, Eddy Kenzo, thanks to his hit single “Stamina”, joined his campaign trail alongside Ragga Dee, Bebe Cool and Jose Chameleone, among others.

After that campaign, President Museveni’s government and the industry’s future were almost intertwined. No one could overlook the influence “Another Rap” had on the campaign, especially on the young people, many had found themselves bumping to the ridiculously infectious song.

On Wednesday, Museveni took oath as President of the Republic of Uganda. This was after winning a highly-contested election against Robert Kyagulanyi Ssentamu, alias Bobi Wine.

Surprisingly, five years ago, it was almost impossible to imagine Bobi Wine next to any form of leadership. In fact, if you had asked Museveni about Bobi, he would probably tell you he is the guy that refused to be part of “Tubonga Naawe” and it wasn’t a big deal.

Yet, it is after the release of that song that the local music industry changed for good. It was the beginning of phrases such as ‘artistes that are for us and those that side with them.’

It was the first time Ugandans asked artistes to apologise for putting out a record and representing a certain ideology.

Bobi Wine, having missed out on “Tubonga Naawe”, became the face of the ‘other’ artistes. He was the one that wasn’t receiving a beating from the public, he would play guitar for Besigye for fun and of course social media to see.

That is when he decided to drop “Situka”, a backdrop of a film he had starred in, with the same title. The song fits the moment and talks about a population dejected because of a political outcome they did not expect.

In this story, we look at the different times President Museveni has been bedfellows with the industry that gave him his latest presidential runner-up. 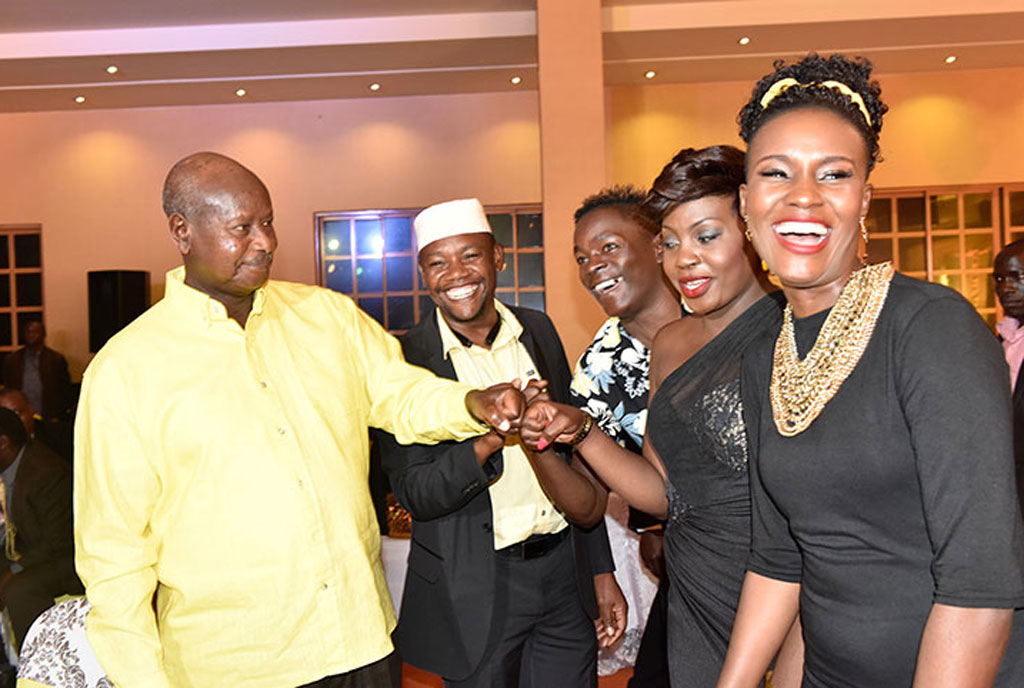 Tubonga Naawe. President Museveni with some of the artistes during the onset of the Tubonga Naawe project in 2016. PHOTO /COURTESY

In 2003, after two seasons of Big Brother South Africa, Endemol

Thus, it was a new idea for the continental audience; it wasn’t surprising it easily became a hit.

Uganda’s representative was Gaetano Juuko Kaggwa, a 30-year-old Law student that took the entire continent on a rollercoaster.

He wowed audiences across Africa so much that when the show was done, Gaetano’s return was an event.

From Entebbe to Sheraton Hotel Kampala, Geatano and his entourage couldn’t easily move because of the crowds that turned up on the streets to catch a glimpse of him.

Before the Gaetano fever could cool down, Museveni invited him, but not just him, all the 12 housemates from that edition and the host. For the first time in such a longtime, entertainment news was on the front page and it wasn’t about a dead artiste.

In 2015, there were preparations for the 2016 elections. President Museveni was going to be on the ballot but unlike the past years, he had threats from his own party.

Former Prime Minister Patrick Amama Mbabazi had his eyes on the sticky throne and was making moves guys above 50 at the time were not used to. For instance, he announced his intentions to challenge Museveni in the NRM party in a YouTube Video that was also shared on Facebook and Twitter.

In a snap, there was a well-designed website, links with videos highlighting what he intended to do.

Quick moves had to be made. After the success of “Another Rap”, it is easy to imagine someone in an oversized suit advised the President to do another song.

So, we received “Yéngoma”. Unlike “Another Rap” that was hip hop themed, “Yéngoma”  was poorly-produced and rushed. The only reason someone besides the man would love this song, would probably be to keep their job.

That song sank before it could float, the team had to think again and this time, they thought celebrities.

It is said “Tubonga Naawe” was pitched at Shs400m, the song would bring together all the top artistes of the time, mixing up those from the contemporary world, afro-beat, inspirational, hip hop. Basically, they grabbed the local Top 20 of the time minus Bobi Wine and put it on a song.

The song had artistes Rema, Bebe Cool, Chameleone, Mun*G, Radio and Weasel, Haruna Mubiru, Juliana and Iryn Namubiru, among others.

“Tubonga Naawe” became the soundtrack of the 2016 election, it was played everywhere the President was and in the same way, hated by many.

At various times, the artistes even had to defend their decisions online as people called them out, but the President had their backs.

He often met them, money changed hands and it continued changing hands for the next five years. After this song, some artistes relied on handouts from the President while some careers were destroyed for good.

But they still meet the President, in glee.

Laughing to Mendo a.k.a Museveni

If there is something many comedians dread, it is making fun of famous people in their presence. If the famous person is Bebe Cool, you can joke on, yet if they are the President, it is a different ball game altogether.

Yet for some reason, Herbert Mendo Ssegujja comfortably does his thing until the man he’s mimicking sheds a tear in laughter. But of course, Ssegujja says he treads carefully, he will rarely present the man in a questionable way. You would not want to criticise a man while playing him.

A film about himself

Before we get to that though, Museveni’s love story with film started with The Last King of Scotland, the film was about President Idi Amin’s physician and his affair with Karen, one of Amin’s wives. The fictional story was a hit with the public and as you could imagine, the President was the chief guest at the premiere.

It was a story about a former president being watched by the current president. Flash forward to 2018, a president showed up to the cinema and watched a film about his younger self.

The film was produced by his daughter Natasha Museveni Karugire and directed by Sharpe Ssewali. According to the different actors on the project, it was one of the best experiences they have had on a Ugandan set.

However, even with this love story, the film industry struggles to get by. The 70 per cent local content promised by the Uganda Communications Commission is still a myth and to make matters worse, national broadcasters carry a lot of pirated translated films.

The story of Bebe Cool and the Museveni camp dates back to the time when the singer recorded a full album endorsing the Museveni presidency in 2005.

Yes, a full album of campaign songs and fun fact, Museveni did not even attend its launch….ouch!

But Bebe Cool was persistent. One time, he even directed a video of Museveni telling him he wasn’t going to be at his concert.

In 2018 though, Museveni went to Bebe Cool’s concert. It wasn’t a career defining moment, but we understand Bebe Cool kept the picture of himself with the man as a profile picture for at least a year.

This too increased the number of artistes going to meet the President.

But on the other side of town, life became hard for some artistes. For instance, that was the last year Bobi Wine staged a concert, since all those that followed were barred.

On the other hand, Bebe Cool has had to stomach more than five performances with the stage as a landing site for mineral water bottles and beer disposables. 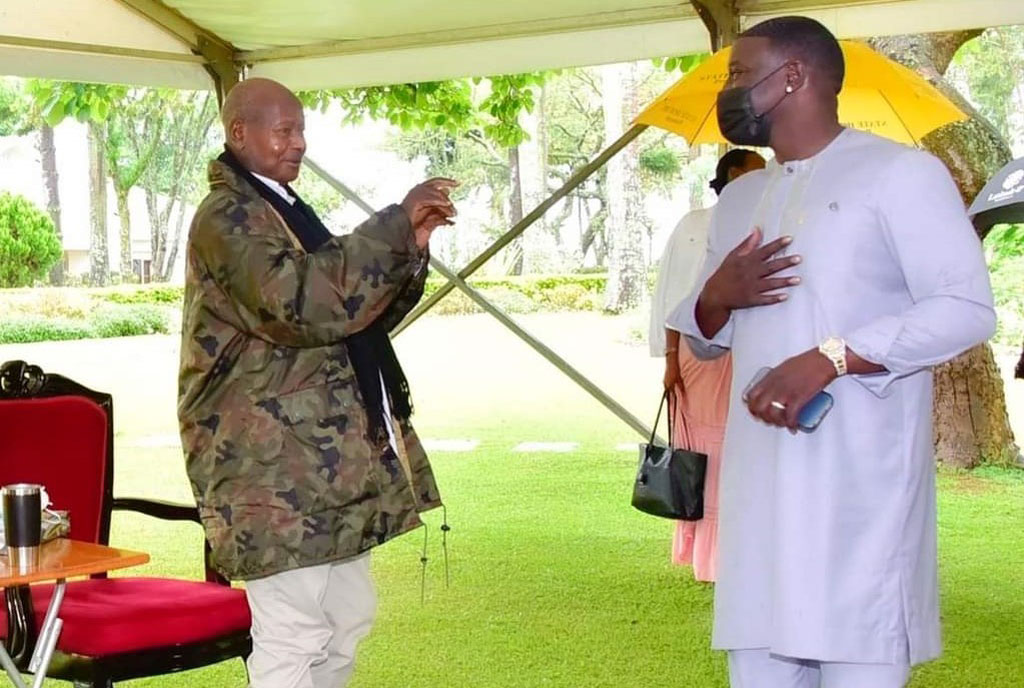 The President has FOMO (Fear Of Missing Out), he likes being part of the narrative, in fact, even when it is not about him but it is trending, he will somehow throw himself in the mix.

You can think about him dining with the Uganda Cranes team, only when they are making waves, (at times he’s not that invested in, I mean, he used to think Uganda Cranes was one of the football clubs like Kyetume FC) athletes after they win medals.

There was him meeting Eddy Kenzo with one of those awards.

And there was the phase of Kanye West and his wife Kim Kardashian; Kanye was in Uganda to work on an album he would later abandon.

With their visit making waves across the globe, someone had to jump into the conversation. Then we saw pictures of them.

Kanye later left Uganda and the Yandhi project he worked on has never seen the light of day. But at least down here, someone got Yeezys for it.

This story has been written various times. It all started in a town in China and more than a year later, the world is still on its knees thanks to a virus that looks like an alien basketball.

Uganda like the rest of the world went into a lockdown. However, even when the rest of the economy has staggered into re-opening, the President’s scientists believe a comedy or theatre show will spread the virus faster than people singing and falling over each other in spirituality.

The story of Bebe Cool and the Museveni camp dates back to the time when the singer recorded a full album endorsing the Museveni presidency in 2005.

Yes, a full album of campaign songs and fun fact, Museveni did not even attend its launch….ouch! But Bebe Cool was persistent. One time, he even directed a video of Museveni telling him he wasn’t going to be at his concert.

In 2018 though, Museveni went to Bebe Cool’s concert. It wasn’t a career defining moment, but we understand Bebe Cool kept the picture of himself with the man as a profile picture for at least a year.