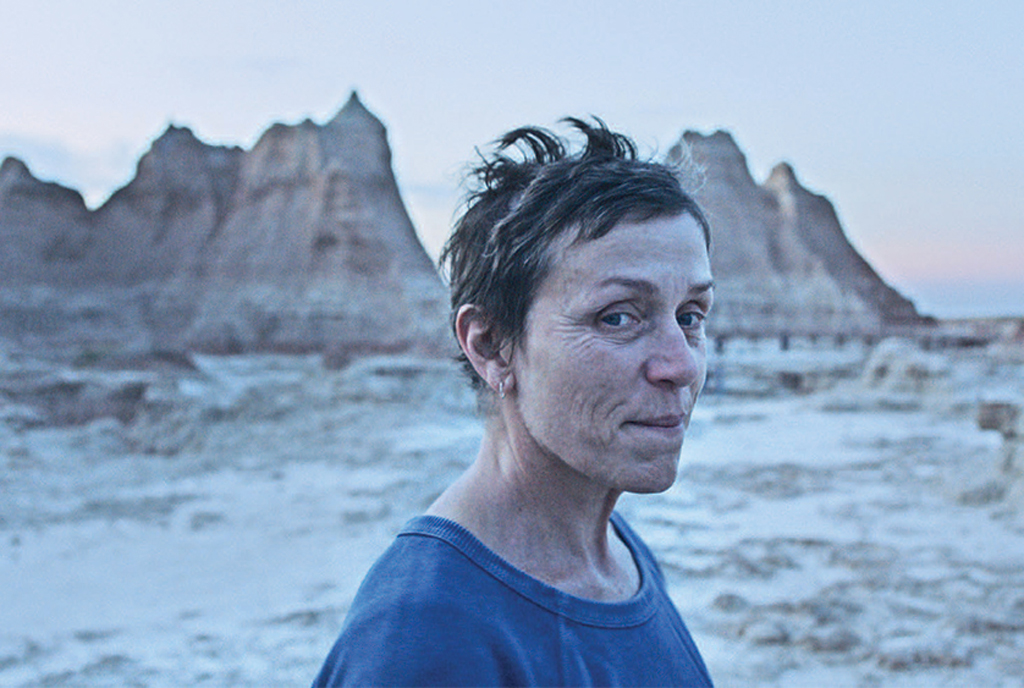 US road movie “Nomadland” emerged as the big winner at the Oscars on Sunday with three major prizes, including a history-making award for director Chloe Zhao, as Hollywood celebrated its most glamorous night with a unique pandemic-era gala.

Zhao’s drama about marginalized Americans roaming the West in vans was honored for best picture, director and actress for Frances McDormand, who now is in elite company with her third Academy Award for performing.

The unorthodox Oscars ceremony was moved from a Hollywood theater to a glammed-up downtown train station to abide by strict Covid-19 protocols, and reunited Tinseltown A-listers for the first time in more than a year.

Zhao, who is the first woman of color ever honored as best director, thanked “all the people we met on the road… for teaching us the power of resilience and hope, and for reminding us what true kindness looks like.”

She is also only the second woman to win best director after Kathryn Bigelow, who broke the glass ceiling in 2010 when she won the prize for “The Hurt Locker.”

“It’s pretty fabulous to be a woman in 2021,” Zhao told journalists as a virtual backstage Q&A, adding: “If this win means more people get to live their dreams, I’m extremely grateful.”

With movie theaters closed all year, and blockbuster content delayed, Beijing-born Zhao’s film captured the pandemic zeitgeist with its stunning portrait of the isolated margins of society.

“Please watch our movie on the largest screen possible. And one day very, very soon, take everyone you know into a theater, shoulder to shoulder in that dark space, and watch every film that is represented here tonight,” said McDormand.

Zhao, who has drawn controversy in China after years-old interviews resurfaced in which she appeared to criticize her country of birth, also quoted classical Chinese poetry in her acceptance speech.

But she was scrubbed from Chinese social media on Monday as a nationalist backlash airbrushed out her achievement, with recent posts containing her name and “Nomadland” mysteriously wiped from the Twitter-like site Weibo.

Her win was also met with silence by Chinese media. 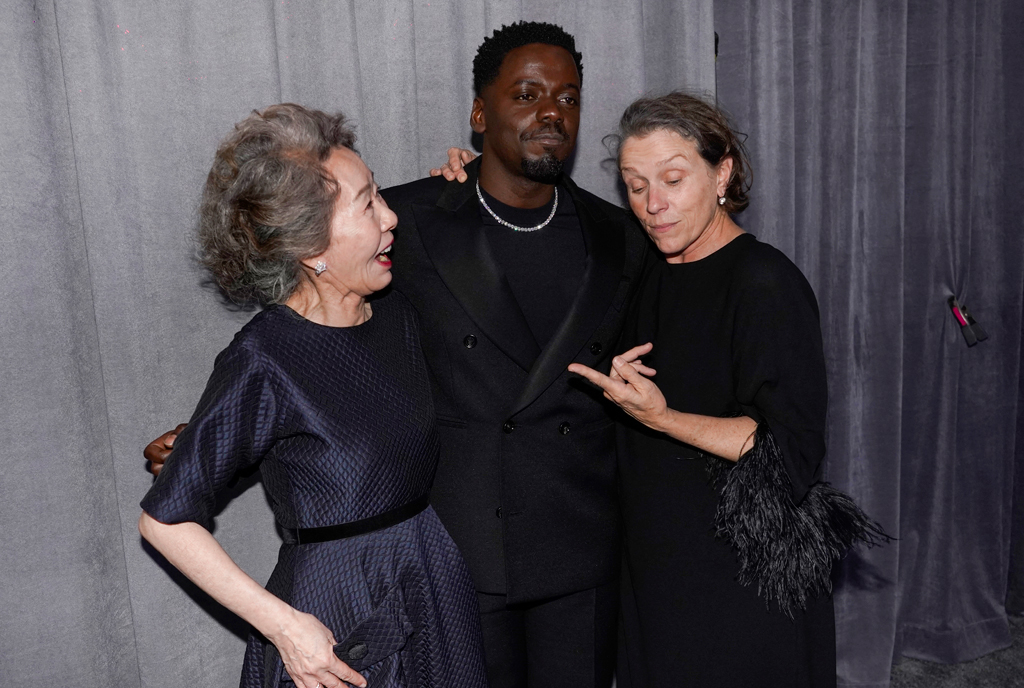 Hopkins’ win at 83 for his shattering portrayal of a dementia sufferer in “The Father” makes him the oldest actor to win a competitive Oscar in history.

But he did not travel to Los Angeles or a London venue to accept the prize, and his victory, with no speech, made for a strange ending to the night.

“How can I win over Glenn Close?” she said, acknowledging her fellow nominee, who has a joint-record eight acting nominations but no wins in her career.

Close made light of her latest loss for “Hillbilly Elegy” by sportingly joining in an unusual dance and music trivia segment late in a show that consistently tried to upend Oscar norms.

References to racism and police violence were threaded throughout the show’s speeches, starting with actor-director Regina King’s opening monologue, in which she mentioned the conviction of a former police officer for the murder of African-American man George Floyd.

“If things had gone differently this past week in Minneapolis, I may have traded in my heels for marching boots,” she said.

“Promising Young Woman” won best original screenplay, the night’s first award. Emerald Fennell, who was seven months pregnant when she shot the #MeToo revenge thriller, thanked her son who “did not arrive until a couple of weeks after shooting, thank God, because I was crossing my legs.”

Netflix’s “Mank” began the night with the most nominations — 10 — but ended up with two wins in technical categories, as did “Ma Rainey’s Black Bottom” and Amazon’s “Sound of Metal.”

The 93rd Oscars began with a movie-style opening credits sequence, as King strode into the venue clutching a gold statuette. 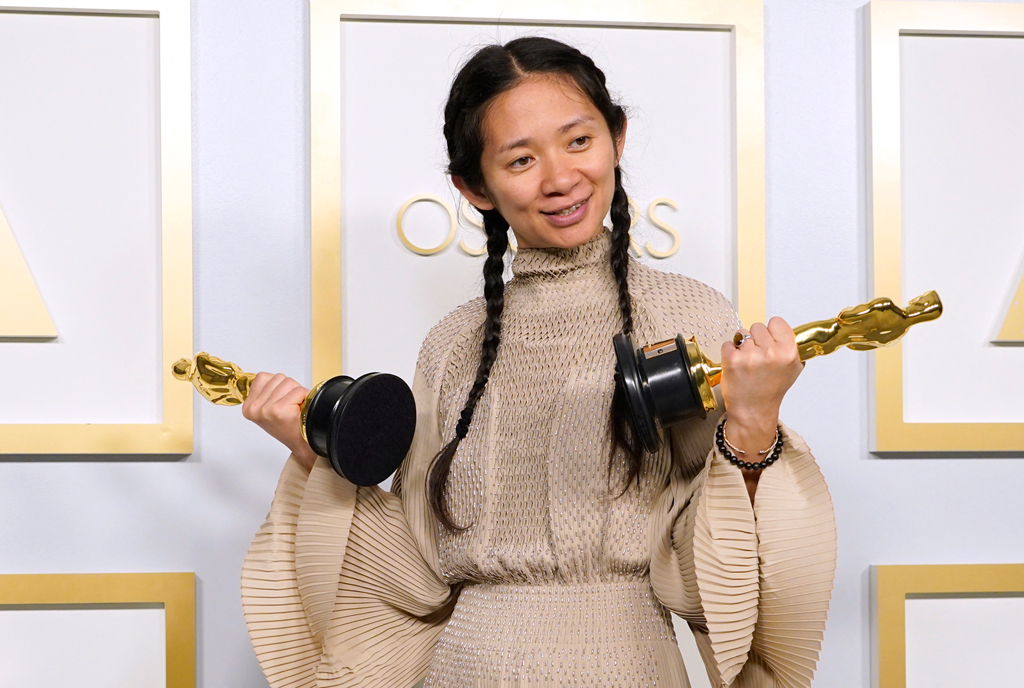 Chinese Director/Producer Chloe Zhao, winner of the award for Picture and Director for “Nomadland,” poses in the press room at the Oscars on April 25, 2021, at Union Station in Los Angeles

“And, yes, we are doing it maskless… people have been vaxxed, tested, re-tested, socially distanced,” she added, comparing the show to a movie set.

This year’s Oscars arrived at their Union Station venue two months late due to the pandemic — organizers have said it would have been “impossible” without the delay.

Before the show, stars paused briefly for pictures and socially distanced interviews on what organizers called a “teeny-tiny red carpet,” where actresses Carey Mulligan and Andra Day dazzled fashion fans in Oscars gold.

An honorary award for the Motion Picture and Television Fund, which has supported struggling actors and crew particularly during the pandemic, was awarded at the Oscars’ traditional Hollywood theater base. Black entertainment mogul Tyler Perry was also honored.

But the bulk of the awards were handed out at the 1930s-built Union Station, chosen for its grand scale and outdoor courtyards, where white tents sheltering everything from Covid testing booths to catering were installed.