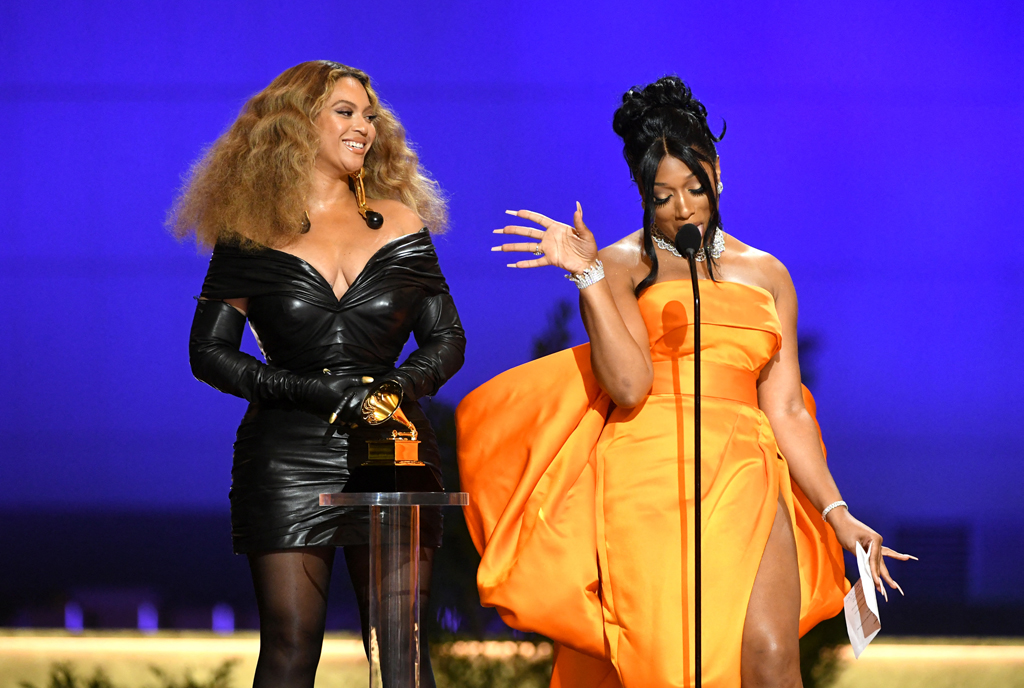 Women won every major Grammy at Sunday’s history-making gala, a joyful night for music’s biggest stars after a devastating year for the industry, with Beyonce, Megan Thee Stallion and Taylor Swift triumphing at the socially distanced event anchored by electrifying performances.

It was a monumental night for Beyonce, who broke the record for most career wins by a female artist with 28.

Swift became the first woman to win the coveted Album of the Year prize three times, this year for “folklore,” the first of her twin quarantine releases.

And rap sensation Megan Thee Stallion charmed while accepting her three awards including Best New Artist — and disarmed viewers with a performance that set the Los Angeles stage ablaze.

Megan and Queen Bey earned two awards together, for their remix of the rapper’s smash hit “Savage.”

The Houston rapper teased with that track along with her single “Body,” before serving up a thirst trap of a duet with none other than Cardi B, both of them in metallic gear that left little to the imagination.

The audacious duo performed “WAP,” a gyrating, thigh-baring celebration of female sexuality that ended atop an enormous bed.

The night featured a host of impressive performances featuring Dua Lipa, DaBaby, Swift, Bad Bunny and Record of the Year winner Billie Eilish, among others — a line-up that kicked off with chest-baring Harry Styles, who won his first ever award.

The ceremony, which fell nearly a year to the day after Covid-19 grounded tours and forced performance venues to close, stood as a concerted effort by the music world to try to move past a crushing 2020 by celebrating its biggest stars.

And there is perhaps no one bigger than Queen Bey, whose Best R&B Performance award for her summer track “Black Parade,” an homage to Black power and heritage, sent her into the Grammy record books.

It was not even clear initially that Beyonce would attend the event, when she did not Zoom in to accept her first trophy of the day, which she shared with her daughter Blue Ivy, for best music video for “Brown Skin Girl.”

But she set social media alight when she was spotted in the audience and then took the stage in a figure-hugging black leather mini wrap-dress alongside Megan Thee Stallion to accept their prize for Best Rap Song.

“As an artist, I believe it’s my job and all of our jobs to reflect the times. And it’s been such a difficult time,” Beyonce said, with her husband Jay-Z looking on, as she received her history-making award.

“So I wanted to uplift, encourage, celebrate all of the beautiful Black queens and kings that continue to inspire me and inspire the whole world.” 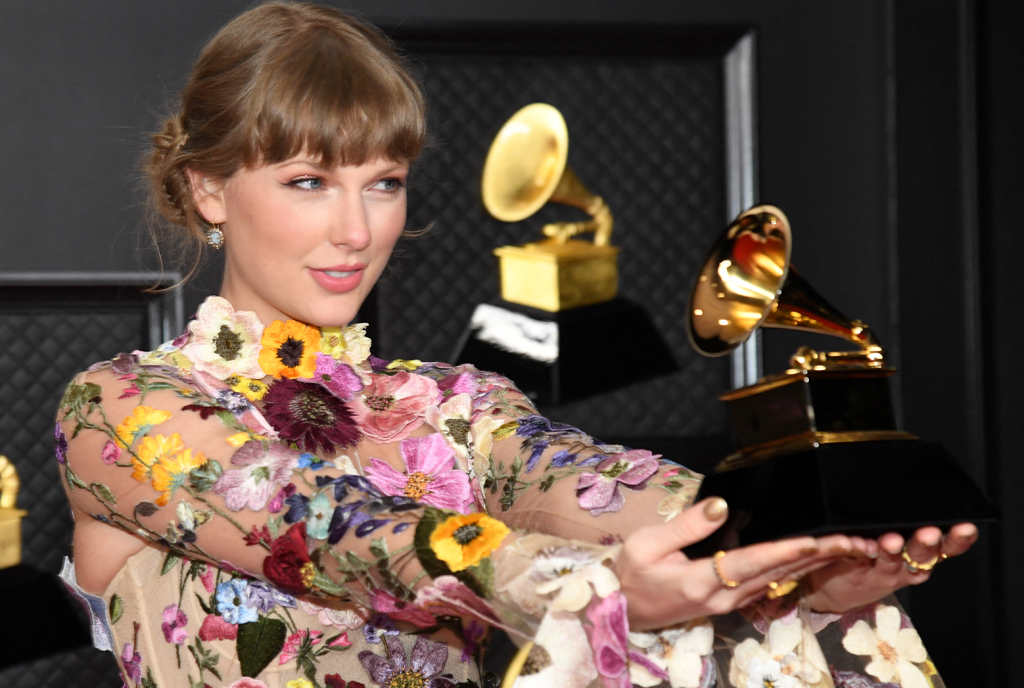 In this handout photo courtesy of The Recording Academy, Taylor Swift, winner of the Album of the Year award for ‘Folklore,’ poses in the media room during the 63rd Annual GRAMMY Awards at Los Angeles Convention Center on March 14, 2021 in Los Angeles, California.

But it was Billie Eilish who took Record of the Year – a category in which Beyonce had two nominations, one with Megan Thee Stallion — a moment that brought to mind Beyonce’s controversial losses to Adele in 2017.

In accepting her second straight Record of the Year prize, the 19-year-old Eilish nodded to Megan, who she said had an “untoppable” year and deserved to win.

“You deserve it, honestly, genuinely, this goes to her — can we just cheer for Megan Thee Stallion,” she told the small audience of mainly nominees and performers.

The soulful 23-year-old R&B performer H.E.R. pulled an upset in scooping the Grammy for Song of the Year for her justice-minded song “I Can’t Breathe,” which tackles Black pain and police brutality.

“I didn’t imagine that my fear and that my pain would turn into impact,” the musician said in accepting her trophy.

And Swift snagged Album of the Year – while losing all of the other five awards she was up for.

She thanked her fans, saying: “You guys met us in this imaginary world that we created, and we can’t tell you how honored we are.”

It was a less shiny night than predicted for British star Dua Lipa, who was shut out of the major categories but won Best Pop Vocal Album, for her sparkly disco ball of a record released just as the pandemic took hold.

“I felt really jaded at the end of my last album, where I felt like I only had to make sad music to feel like it mattered,” she said.

“And I’m just so grateful and so honored because happiness is something we all deserve and need in our lives.”

Brittany Howard — known for fronting the band Alabama Shakes — won Best Rock Song, as Fiona Apple scored two awards for her album “Fetch The Bolt Cutters,” which many critics hailed as a masterpiece.

Though most of the rock fields were unprecedentedly dominated by women, The Strokes won for Best Rock Album for “The New Abnormal,” their first Grammy ever.

And Nigerian superstar Burna Boy scored his first trophy for Best Global Music Album, ecstatically accepting the prize which he said “is a big win for my generation of Africans all over the world.”

But it wouldn’t be the Grammys without controversy.

The Weeknd has pledged to stop submitting music for awards consideration after he surprisingly received no nominations, despite a big year commercially.