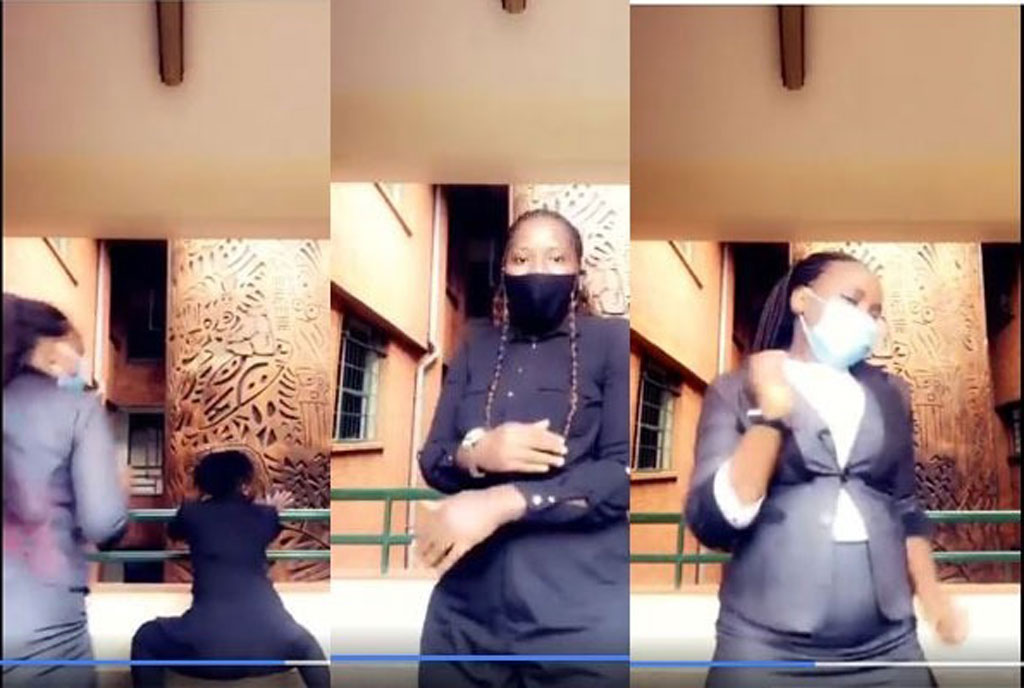 Some of the students twerking

Eight bar course students undertaking clerkship at the High Court commercial division in Kampala have been summoned by the Law Development Centre (LDC) over a video that went viral showing them dancing in court premises.

According to the summons issued by Victor Omega on behalf of the head of the Bar Course, the students are expected to meet in the office of the head bar course this afternoon without fail.

“Matters to be discussed shall be tabled before you upon arrival. Treat this with the seriousness it deserves and endeavor to keep time”, reads the summons sent to the students via email.

Trouble for the students started when the Acting head of the Commercial Division of High Court Justice, Anna Bitature Mugenyi saw a video making rounds on social media showing the student clerks dancing alias twerking in their black suits to Tumbiza Sound, a popular local song that was slammed by the Health Ministry officials on grounds that it undermines government efforts to fight COVID-19 which has so far infected 36, 407 Ugandans and left 290 dead (January 4, 2021 MOH update).

The song by Eric Opoka commonly known as Eezzy was particularly criticized for containing messages contradicting the standard Operating Procedures issued by the Health Ministry to contain the spread of COVID-19.

Justice Mugenyi and other Judiciary administrators first summoned the students for engaging in acts that puts the image of the Judiciary at disrepute.

They were asked to write apologies for their conduct before LDC picked interest in the matter, according to the Judiciary Spokesperson, Solomon Muyita. Asked if it is unlawful to be record videos at courts, Muyita said some funny things do not have to be done in courts.

He explained that only purposeful documentaries and movies are the ones allowed but with permission from the administration, which wasn’t the case with the students. The government of Uganda through Uganda Communications Commission and Ministry of Health has since agreed with Eezzy to rework the song and provide an improved version encouraging people to observe Standard Operating procedures.