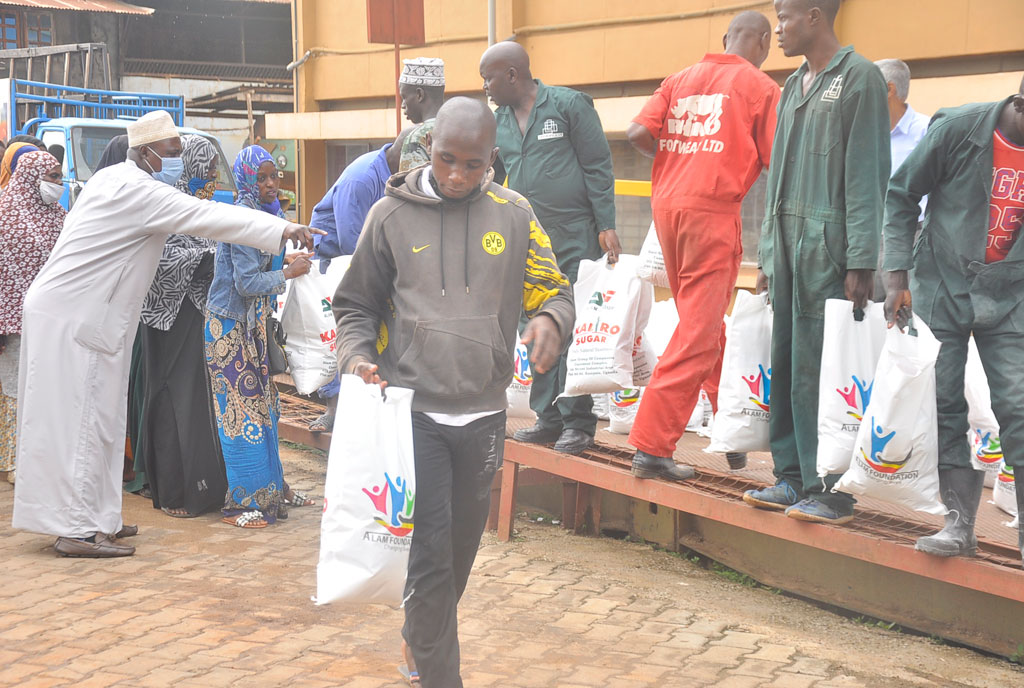 Some of the beneficiaries receiving their food items. PHOTO/ISAAC SSEJOMBWE

The Third Pillar of Islam is Zak?t, or alms giving. This basically means that a payment makes the rest of one’s wealth legally and religiously pure and by following this pillar, Muslims have to deduct a certain amount of their wealth to support the Islamic community, and it is usually about 2.5 per cent of an individual’s wealth.

Last Friday morning, Alam Group of companies like they have been doing since 2000 during Ramathan, gave back to the needy to fulfill one of the pillars of Islam.

They distributed food items worth millions to people in surrounding areas of Namuwongo, Kisugu, Bukasa, Soweto and Kanyogoga, among other suburbs from 8:30am until 10am at their premises on 8th Street Industrial Area.

Among the items that were distributed included maize flour, sugar, rice, beans, cooking oil, tea leaves and flour.
According to Hellen Mugisha, the PRO Alam Group, they have been giving back to the needy every Ramathan for the past 22 years and will keep doing so.

“Normally as Alam Group of companies we do this to help those families with something to eat during the fasting period,” she said.
Mugisha added that they always reach out to the nearby communities whenever they are going to give out goodies because it is mainly those people who need the help.

“The targeted people include pregnant women, the elderly, orphans and disabled. It is mainly these people who we look at during this period,” she added.

About 200 people benefited from the distribution, which also saw some of the employees receiving food items.
The rest of the items, we later learnt, are to be distributed to mosques around town in the coming days.