Joshua Cheptegei officially off the shelf 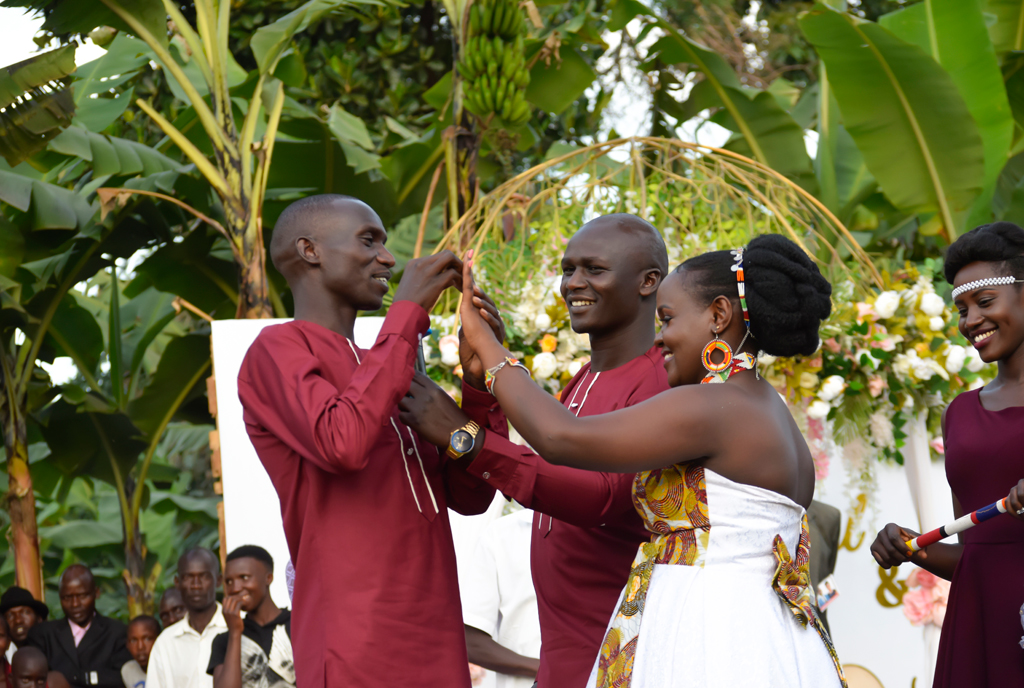 Hitched: Last Saturday, Kapchorwa came to a standstill as world champion and gold medalist Joshua Cheptegei was introduced by his fiancée to her parents. Allan Chekwech was on the ground to document the function.

The sunset rays sifting through the banana plantations shone directly into her well made-up face, contrasting her from the rest of the team standing across the lawn.
It was well past 5pm on October 30 when she was ushered from their family home into the venue where she would show to relatives and villagemates the man who had melted her heart and swept her off her feet many years ago.

From high level guests including athletics stars David Rudisha, Bridget Kosgey, Geoffrey Kamworor, Stephen Kiprotich, Jacob Kiplimo, chief guest Don Wanyama, also the Vision Group CEO, and Global Sports Communications staff Jurrie Van der Velden, Addy Ruiter, and local politicians, to village residents that filled up tents and sat on the grass, the crowd had suddenly gone quiet.
They eagerly waited for what Carol had to say. Her friends, dressed in onion purple and royal green stood at a distance in awe, sometimes anxious, for what their ‘personal person’ had in store for the love of her life.

Dressed in an immaculately made white dress with a heavy dose of African print at the top and decked with traditional beads from the Kalenjin ethnic group, Carol Yeko Kamari looked up into the eyes of her tall, dark and lanky hubby. She composed herself for a second, with one hand holding the Kalenjin symbolic baton, popularly known as rungut, and the other holding the microphone well close to her mouth. In her distinct sharp voice, Carol told the ecstatic crowd. 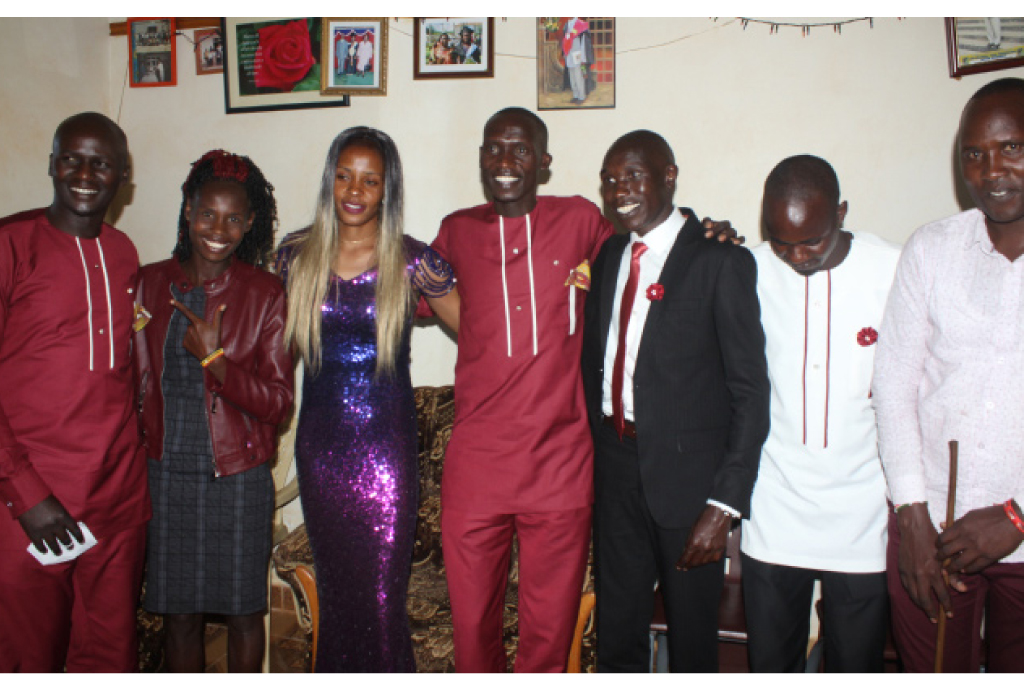 Some of the world champions that attended.

“Here is my heartbeat.”
The declaration elicited cheers and ululation from the audience that included the couple’s parents and relatives.
Cheboron, Kaptum in Cheminy, Kween District was the host of hundreds of people from all walks of life who had descended on the home that gave one of athletics’ finest on planet a rib.
Carol had done her part. She had shown the world, her home, the man she had groomed into a global figure for the seven years they had been together. It was now turn for the World and Olympics icon to respond to his better half.

Joshua Kiprui Cheptegei, dressed in a maroon outfit, took the microphone. Standing besides them were athletics coach Benjamin Njia and his wife Elizabeth Cherukut who had played the bestman and matron roles respectively.
Together with Carol’s friends across them were Cheptegei’s friends dressed in off-white African shirts and black trousers. They looked confident of what their candidate would say.
Cheptegei, usually known for his soft-spoken nature, this time roared into the microphone, “This is the flower of my heart.”
The crowd went wild as the DJ played Very Nice Tumdo, a popular song among the Kalenjin done by Kenyan songbird Rose Cheboi.

After many years together, Cheptegei had finally taken the big and bold step to traditionally marry Carol, an announcement the bride first made at Shinning Light of God’s Ministries church early in the month.
The speeches then ensued before Cheptegei’s family brought in the gifts that included bride price and a car, a black Fielder that he bought for his mother-in-law as appreciation for grooming such a wife.
The team danced to various music, heavily from Kenya, as the congregation walked into the darkness and to their vehicles stretching close to a kilometre of the newly tarmacked Kapchorwa-Suam Road for their journeys back home.

It was past curfew time. People had to return to their families. They had to attend to other businesses. But it was not yet time to call it a day for Cheptegei, his wife and inner circle. 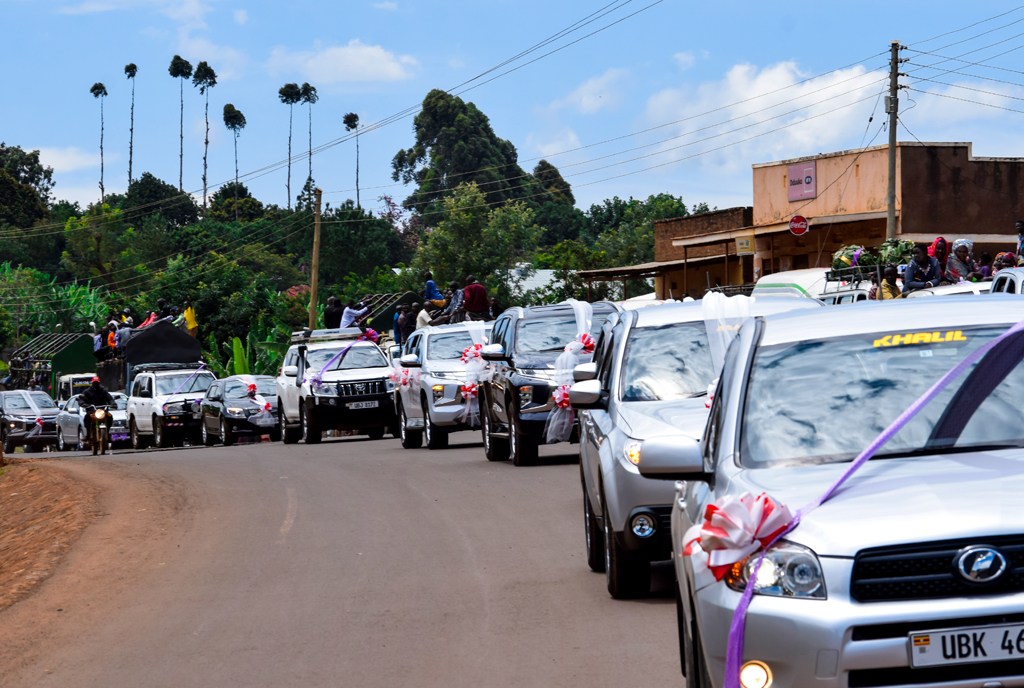 The bridal fleet was enviable for many. PHOTOS /COURTESY/JACOB MUTESA

At about 8pm, close to 50 people were invited to a residential after-party at Sipi Valley Resort in Kapchorwa, overlooking the famous Sipi Falls.

The crowd assembled well in time.
The Cheptegeis sat in a leather sofa comfortably as they whispered sweet nothings to each other and looking into whatever contents there were in Cheptegei’s phone.
“It feels like we are just dating,” Carol, broadly smiling, and this time wearing a yellow knee-long sweater and trousers, joked to this writer. Chep, as the star is fondly known, smiled heartily.

The journey to this day had been long and winding, really. They had met and lived together when no one beyond the village knew the pair. They had lived in a small rented house, way before it started raining money. They had been through it all. Their relationship had withstood stone throwers and skeptics. Their tested chemistry had borne two children; Jethan Cheptegei and Jemima Cheptegi. But this day felt new, the bonding fresh and the love in the air manifested it all. 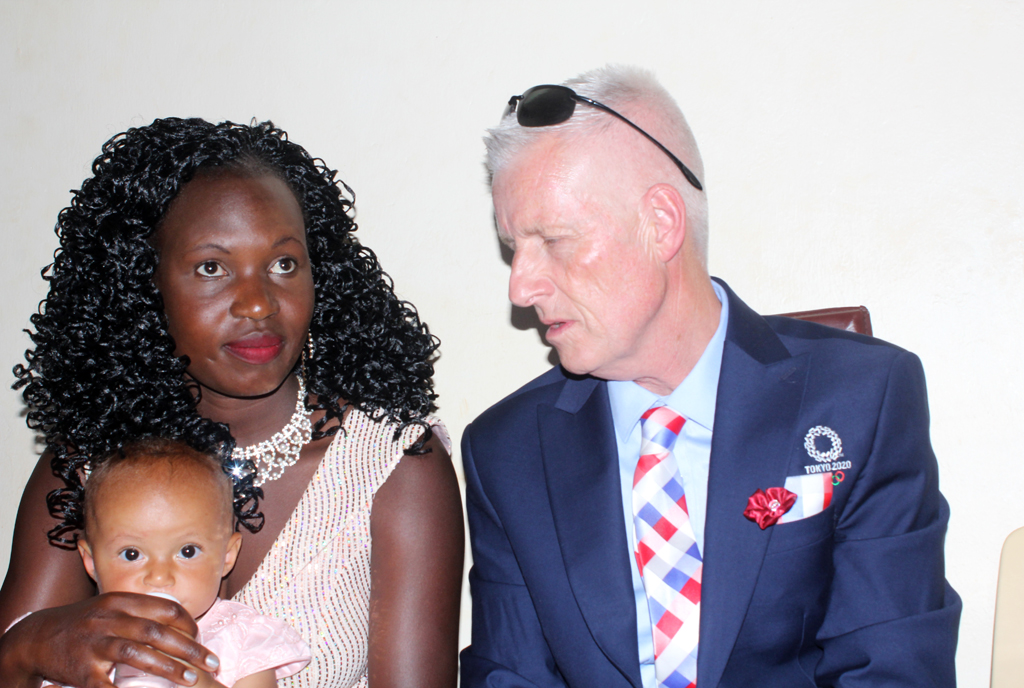 Njia took to the floor and announced some housekeeping rules.
“Ladies and gentlemen. We are here to have fun; let’s dance and drink as much as you can but do not carry the drinks home. It is all on the house. And please, make responsible use of your cameras,” he said as a makeshift DJ played Kalenjin songs.

The crowd dined and wined. They ordered all tribes of drinks, including the signature Lakwek made out of honey and local herbs.
Shortly, the Cheptegeis opened the dance and the party was full blown, especially for those that appreciate Kalenjin music.
Kiplimo was as excited as Cheptegei. He danced the most and the night drifted so fast. At about 2am, the guests starting retreating to their beds. It was a nice day and great night, after all. 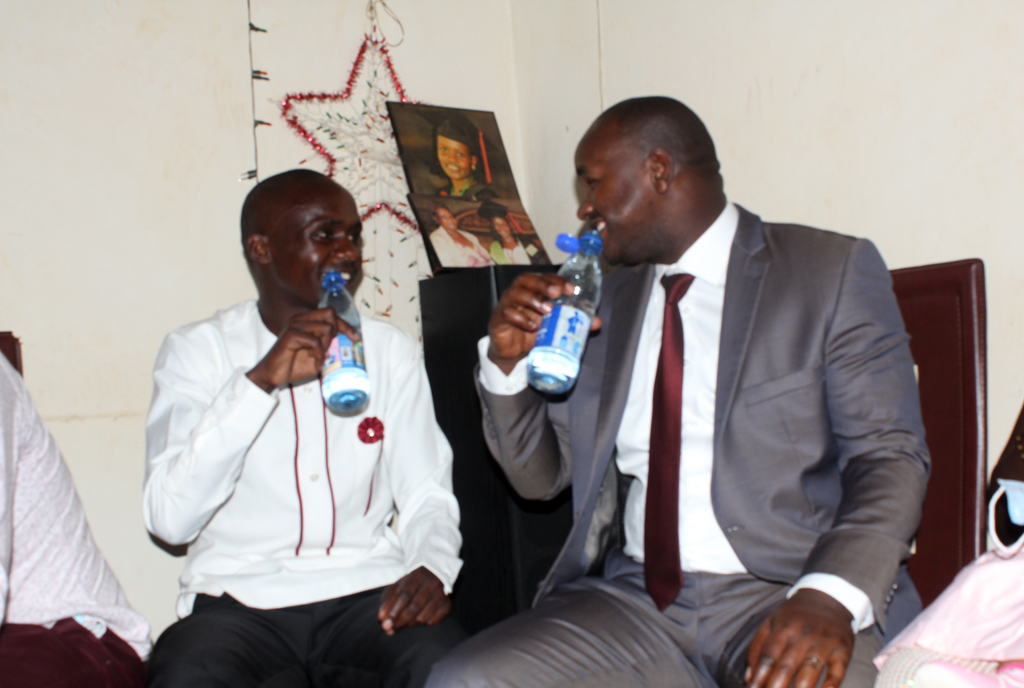 This was the climax for what had been a dramatic day.
Earlier, Cheptegei and his entourage had brought Kapchorwa Municipality to a standstill.
At about 9am, he had assembled the team at the Joshua Cheptegei Development Foundation offices from where they dressed up.
As soon as they started driving through the town, onlookers lined the road in the noon sunshine, jostling to catch a sight of the global superstar. Cheptegei emerged from the sunroof of Peruth Chemutai’s navy blue ride, gifted to her by President Museveni for the Olympics exploits in August.

He waved and acknowledged greetings with a bow to wild cheers from the ecstatic crowds. He then retreated to the heavily tinted car and the convoy started snaking away to Cheboron where crowds waited eagerly for the introduction ceremony.
The team from Kapsumbata clan, where Cheptegei belongs, led by chairman Joseph Musobo, aka Waya, had been waiting for Cheptegei and team at Siron, the gateway to the Kapchorwa-Suam road.
The journey to Cheminy is an interesting one. The convoy hurtled down the slopes and winding hills and arrived at the venue shortly before 2pm. 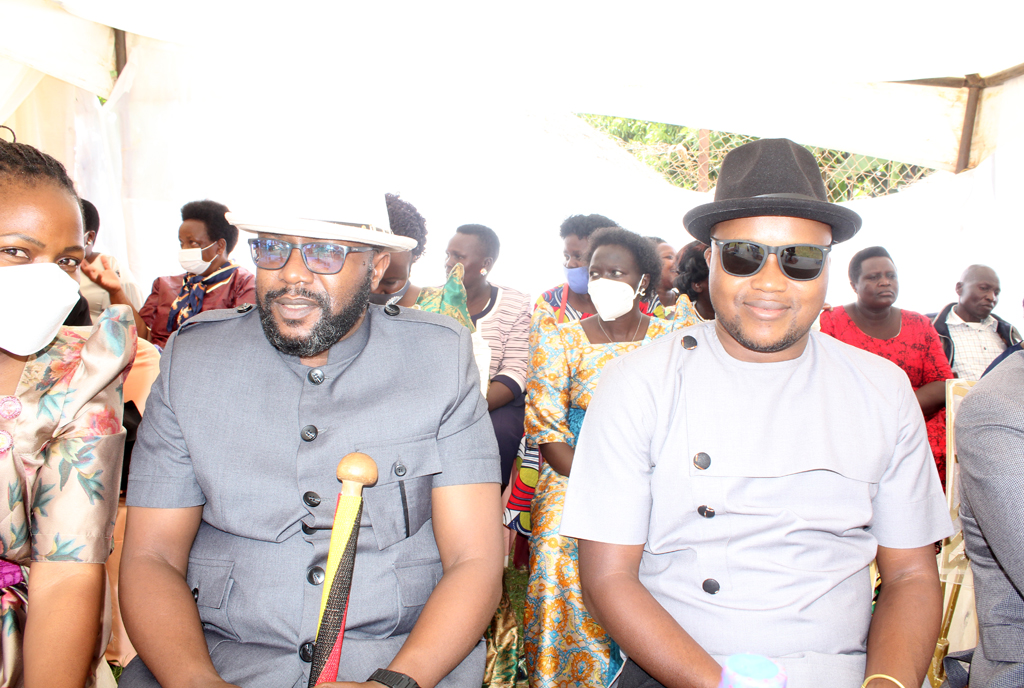 The bride is a born to former government engineer Stephen Sikuku, now deceased, and Jessica Chesakit.
Cheptegei told this newspaper after the ceremony that his wife is the reason behind his success.
“She is, and she was, the woman of my dreams. She has supported me to achieve my dreams and become what I am today,” he said.

Carol said she feels “privileged to be married to Chep”.
“Apart from Cheptegei being a loving husband, he cares and works hard for the welfare of the entire community he lives in. What pleases me more is the fact that he is positively changing many lives through his work as an athlete in Sebei sub-region and the country at large,” she added.
We can’t wait for the wedding.