Ugandan female artiste, Sheebah Karungi is recipient of Mdundo Awards 2017, after her music was most downloaded on the Pan African music website.

“Thank You Sheebaholics,” she wrote on her Facebook Wall, and also posted the award. Her fame rides on songs like John Rambo, Nkwatako, Akuse, among many.

With the award in the bag, things seem to generally be going well for Sheebah. She has been one of the African artistes that have graced the Coke Studio Africa 2017 where she was paired alongside Asegnew Ashko from Ethiopia to create music fusions cutting across authentic Ethiopian music and the best of Uganda dancehall.

“My dream is to become an international artist not just locked in Uganda and to be the biggest super star I can ever be,” Sheebah says of the opportunity Coke Studio Africa has presented to her, adding:

“Being on Coke Studio Africa this year is one of the things that make me feel like am on my way now. I am so honoured to be here and that Coke Studio has recognized me. Africa is recognizing me and I am happy to be working with talented producers and musicians. I am going to use this opportunity to do everything I can to go the next level.”

Sheebah is slated to host fans and music lovers to a listening show of her forthcoming album titled ‘Karma’. This will be at Sky Lounge at Kisementi, in Kampala. Revellers will part with 50k. You don’t need to be keen to have seen her tattoo with the word ‘Karma’ on her belly. 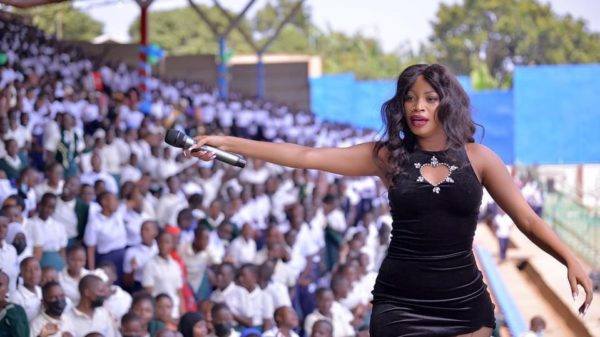 The Ministry of Education and sports has put a temporary ban on hosting of performing artistes on premises of public or private Primary and...