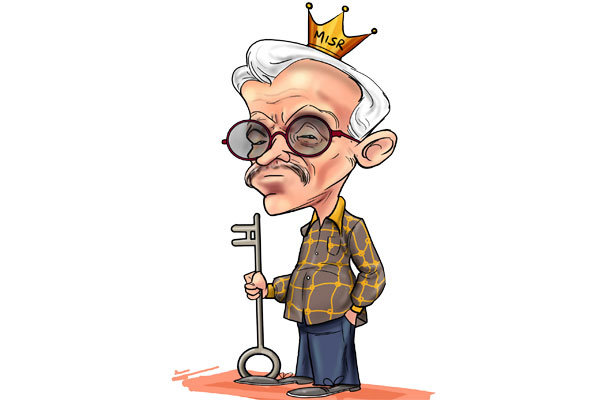 How to be… Prof. Mahmood Mamdani
MC Micheal: Music is like a ghost DJ Roja & Slick Stuart: Like a pea and pod. Photo by Abubaker Lubowa

Dynamic duo: DJ Roja and Slick Stuart are the first DJ duo in the Ugandan music industry. They started out as individual DJs and later coupled up. These two play together at different events but they have nights at hangout places like Laftaz Comedy Lounge, Cayenne Bar and Lounge and Club One in Mukono. They talked to Lawrence Ogwal about the business and their plans as a pair.

When did you start deejaying?

For me it started as a joke, I was mainly interested in doing what I had studied at school. My elder brother was a DJ and when he bought the equipment in 2007, he started teaching me how to mix using the turntables. The love came in 2009.

Had you started playing in any places?
By 2009, I had mastered the art of deejaying but didn’t have events to play at. My brother connected me to Country Gardens in Kitantale, then I moved to Blue Haze in Wandegeya and by 2010, I was playing at Club Rouge. Rouge was one of my greatest achievements because it was one of the best clubs in Kampala then.

Was that when you decided that deejaying is the thing?
While at Rouge, I realised being a DJ could bring me quick money. I started by earning Shs50,000 per night and that was huge money because I played almost every night. The pay rose to Shs200,000 and then Shs450,000.

So, how and when did you meet Dj Slick-Stuart?
We have been working together since 2012. We always met at events such as Buzz, Kadanke, and when international acts flew in; Konshens, Busy Signal, among others. We were not friends, just Hi buddys!

When did you decide to team up?
During the several events we met at, I realised that we played almost the same music. He was so good and so in 2014 we talked about becoming a duo.

How was it for you two in the beginning?
We always played music back to back. When for example I played five songs, he also plays five songs and we went on like that.

You guys are always using different turntables to play at the same time how is that possible?
Stuart and I sync. I easily predict which song he will play next. We sat down and decided to play music back to back without a break. We practiced this for some time and thank God it worked out and it is now our style of playing as a duo. DJ Roja during last year’s mixtape event at Laftaz Lounge. He says this was his best moment as DJ so far. Photo by Abubaker Lubowa

Tell us about the mix tape party which you organised late last year?
Most people don’t know but the recent mix tape party at Laftaz swimming pool was our second. We first organised a mix tape party in 2014 at Club Venom beach bar, it was also a success but we didn’t get money from it, we only did it for our fans.

Whose idea was it to start the annual mix tape release party?
The idea was mine. I sat Stuart down and told him we should try out something that has never happened in the country, an event headlined by DJs.

You guys are now branded as a duo, so what happens when a client wants one of you at an event?
It’s fine because at the end of the day, it will be a service offered by our company, Slick-Stuart and DJ Roja. Most of the times we, however, advise clients to book us a duo because it is a little cheaper than when you book one of us.

You guys are always together, so do you ever get misunderstandings?
A lot, but we are grown-ups. We know how to settle them in a professional manner.

You have heard you feature in songs with Nutty Neithan and A Pass, are you trying to sing too?
That was one of the ways we wanted to push our brand. What happens is, we get into studio with an artiste of our choice, give them what to sing about and what the artiste does is just voice the song.

What are some of the challenges you face as DJs?
Unlike in Kenya where DJs are paid highly and respected more than artistes, it is the reverse in Uganda. We are paid less and undermined by event organisers.

Where do you think the DJ industry in Uganda is headed?
The industry has grown. These days it is hard to see an event without a DJ. The only thing that is lacking is cooperation. The reason I partnered with Stuart is to let people know that DJs can also work together. I believe time will come when we shall organise a huge event in a huge venue, just for DJs.

What are some of the rumours you have heard about you two?
Newspapers have written about us splitting up soon. There was also a rumour that Chameleone once beat me up. That was not true, he only messed me up when he abused me.

Do you guys live together?
No, we don’t stay together but maybe in future if all goes well, we shall build a big house and stay together to ease our work.

How do you feel when you play music and the crowd seems bored?
This only happened when I was starting out but not anymore. Deejaying is just like football; there comes a time when someone is not on form and he won’t play good football. A good DJ therefore has to read his crowd and know the type of music they like.

What else do you do apart from deejaying?
I own a company called Legal Entertainment. We hire our equipment, train DJs and also artistes booking for different events.

What has been your best and worst moment in this business?
My best moment was the mix tape party at Laftaz last year. The event sold out in a way I couldn’t have imagined – I was so happy. My worst was when Chameleone insulted me in the booth. He messed up my night.

Bits on roja
Real name: Roja Kitaka
Age: 27
Attributes: God-fearing, simple and a hardworking.
Background: Raised in Kitintale, went to Homisdalen Primary School, City High School for O-Level and A-Level, and Mbale Technical School for a Diploma in Refrigerator and Air conditioning.
Inspired by: Locally, DJ Shiru, DJ Mark, DJ Ronnie, DJ Aluda, DJ Lex and Alex Ndawula. Internationally, I enjoy DJ Jazzy Jeff and David Guetta.
My music: I like rap music since I used to rap at school. I listen to JayZ a lot! When did you start Deejaying?
I started out five years ago. My late father had disco equipment which he didn’t want anyone to touch. I would sneak into the store where he kept them. One of his workers used to connect them for me and I there is where I taught myself to use turntables. For one year, I deejayed for the love and not money.

Which places did you play at free of charge?
I used to tag along with my DJ friends for events where they had been invited to play music. So they would give me a chance to play for a few minutes.

What was the beginning like?
In 2012 I used to work with a company called Extended Videos; we used to edit videos to match the audio. For example, some videos such as Locked Away where there are skits in between; we would edit them out and let the song play without stopping. After sometime, DJ Selector Jaya and others called me to order for edited videos. This was how I slowly broke out.

What would you say was your breakthrough as a DJ?
During the time I edited videos, I was contacted by Silk Events to do video mixing at their events. The big break for me was in late 2012 when I was told to play at the Club silk Street Jam. It was one of the biggest events I have always wanted to be part of.
Unfortunately, I was told to battle DJ Shiru for the crowd to judge. He beat me hands down and I was so embarrassed because the crowd kept asking where they brought me from. I learnt a lot from this and pulled up my socks. The next year was the same; I battled him and emerged the crowd’s favourite.

How and when does DJ Roja come in?
When I had just begun my career, I used to do a lot of High School events and I would always see this DJ at the same events. I kept wondering why.

Was it this intrigue that inspired the duo?
Since I wanted to know who my competitor was, I decided to pull him closer and we became friends. We appreciated each other’s work and decided to work together as a team.

What was it like blending two DJs to make a duo?
Two years ago, we decided to organize an event to see if our fans really loved us and could come for an event organised by us. This was the first mix tape party at Club Venom, it sold out and we were both happy to be appreciated by the fans. That was how we got convinced we can actually work together.

Since you are always working together, you must encounter some differences.
It happens a lot, but we try as much not to put our issues in business. We sit as a team and talk about it because we don’t want to lose focus and we also make sure the fans don’t get to know about it.

What makes you tick from other DJs?
We think ahead and plan to change the industry. We have music, a thing that is only seen with International DJs like David Guetta and DJ Khaled. We have done songs with Nutty Neithan, Apass, Winnie Nwagi and Peter Miles.

What are some of the challenges you face as DJs?
We are not respected by event organisers. They underpay us thinking we don’t add value to the event.
How much do you charge as a duo?
When we are hired as a duo, we charge Shs2m. Individually, we charge between Shs800,000 and Shs1.2m.

What are some of the rumours you have heard about you two?
Tabloids used to write that we had separated. They also once wrote that we fought because of a girl.

How do you handle a bored crowd?
This depends on the crowd I am playing for. I always keep a keen eye and listen carefully to reactions from the crowd. When they are not interested in what I am playing, I keep on adjusting until I find out what they want.

What else do you do apart from deejaying?
I am into video editing and in my free time, I play basketball, just for love.

About Slick
Real name: Stuart Kavuma
Age: 26
School: I went to Vincent Alex Primary School, East High School for 0-Level, Kabojja High School for A-Level and then Makerere University for a Bachelor in Information Technology.
Best moment: When I play at events headlined by international artistes.
Worst moment: In 2012 when DJ Shiru beat me hands down in a DJ battle; the crowd doubted my skills.
To young DJs: Have God, have respect, discipline, work hard and love what you do.
My music: I like slow RnB music.
Inspired by: Locally, by DJ Shiru and Alex Ndawula because I grew up watching them. Internationally, DJ Khaled because he does the same thing we do; collabos with artistes.