You know he is a Ugandan artiste when ... 1. You board the same taxi when going to his concert, and in some cases, he comes on a boda boda to perform for people who came in Range Rovers.

2. He brings his music on a flash or CD to a concert and just shouts “DJ, track number 3,” at an apparently live show.

3. He keeps repeating the words, “You don’t know,” when being interviewed on radio or TV.

4. He still calls himself an upcoming artiste, 10 years into the music industry just because he hasn’t landed a hit song.

5. He drives a very expensive car, has a very beautiful woman but has no house to his name.

6. He calls himself international after recording a song with a fading Jamaican artiste.

7. The album title is in English but all the songs are in vernacular.

8. The song starts off with shout-outs and dedications to the producers. “D-Records , Producer Bless ting dis.”

9. The hit song becomes the title of the album.

10. He shows up with his sunglasses to a night club. Brother, do you see the sun at midnight?

12. He mentions his name in all his songs.

13. Every time she’s asked when she started singing, she keeps talking of how she used to sing in the church choir. Is it the church choir that taught you about see-through attires? And when her nude photos leak to the press, she goes gospel on her next album.

15. The one hit wonder song loses steam, the ariste fades off the scene faster than Usain Bolt on the 100 metre track.

16. He’s launching an album, the concert is slated to begin at 8pm, it begins at 10pm, with a plethora of curtain-raisers until midnight when he gets on stage. And he always performs the hit song last.

17. He wins a kadongo-kamu award for a reggae song.

18. He gets beaten by his own fans at a concert.

19. He grabs his pants between his two legs while performing. It’s the only dance stroke they have mastered.

20. She releases a few songs, she compiles an album, organises a concert and breaks away from the group.

22. When he always organises the main concert on Friday at the following venues (Kyadondo for the big names, Obligatto, Kati Kati and Equatorial parking for those who are not sure about their size and Garden City Roof-top for those who are certain big venues are out of their league, and Gatto Matto for the rappers)

23. When he has an animal name (Weasel, Kid Fox) He is named after a wine for example Bobi Wine. His name is actually a job occupation (Butcher-man) and he acts like a cool baby (Bebe Cool). They give themselves all sorts of names, from radios to utensils.

25. When she plays a prank on herself days to her concert to gain sympathy. Talk of cooking oil becoming acid.

27. When he organises a concert, and the following people turn up, his wife, his children, his house maid and a few friends and in-laws. Do you need more proof that people don’t like your music?

28. After being nominated for a big award, he adds the award to his name for example, Weasel BET.

29. He promises the country a sack of Grammy awards based on his amazing English songs like “ayamu gowingi higher (read going higher)” or “Zeyi want to kill me because ovu u.” 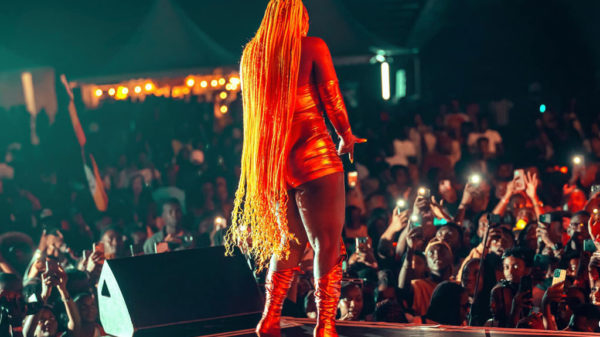 Deserved? Last weekend, Spice Diana had a concert at Lugogo Cricket Oval and her show generated a lot of talkability 24 hours before she...