Clan of fame. The Ugandan celebrity is a clan of its own. Everyone who joins it eventually succumbs to the values and norms one way or another. As such, some things have been synonymous with them, writes Stella Nakakande. If you were born a very calm child, then this trade is not yours or maybe you have to look up for things to get you angry. If you have been out of the media for a while or want to get in, then go ahead and claim you are better than a very well celebrated musician as soon as you spot a journalist.

Do it so often, that the other person, insulted by your remarks either  shouts back (hence making you even more famous) or Balam decides that there should be a battle between you two, we shall call it ‘battle of champions’, split the stages with barbed wire and even have the next day’s papers declaring the so-called winner.

As far as this fighting is concerned, please make sure you make a quick song entirely dissin’ the other person in a clever way, some may call it creative.  They will obviously fume with anger and will respond and then you will compose a reply and voila, your entire album will be made.
Do not be embarrassed to fight in public or come up with clever things like an acid attempt to get media attention for your album launch, all in a bid to beat the competition.
And when you are finally in the newspapers, please drag it out as long as you can.

Today it is called swag and you have to have a lot of it or your career is dead. For men, the car you drive says a lot and when you are about to get it, please if you can, do invite the media to the custom bonded warehouse upon the car’s arrival. Please make sure it is imported. It is also crucial that the car bares a personal number plate and better still if it is big and monstrous. Every thing they own glitters – the bags, shoes. In addition to those possessions they throw money around, throw lavish birthday partys, a meal to celebrate acquisition of a new dog, car, a splendid house. And it does not matter if you have to borrow it. After all money makes more money, this is investing in the brand. Bad black with her girls

If you are on top and do not have a couple of fairly successful (one-hit wonders at most) and non-successful artists or people around you, then your fame is questionable. It has to look like they really need you, which of course they do.  And since we talked about fighting, these should also be involved in the battle, they should diss the other master for attempting to scorn their master who of course is non-other than yourself.

If you are the underdog, then by all means get involved in that verbatim and then when you think you are famous enough, make a very public getaway and blame your greedy boss for it and quickly get yourself an entourage. It is not uncommon for an artiste to have a language that only he or she and a few others understand. It is important that the artiste’s family is not able to communicate in that same language.  When a ‘civilian’ in this sense passes via a group of these celebrities, the language should change from “how are you?” to “watta guan” (I do not know how to spell this correctly and most likely neither do they).

For the Ugandan celebrity it is imperative that one contributes to our native language and since language is always growing, then well, they should be the sailors of this boat and we are all aboard one way or another.  If you doubt me try kiwani, mazongotto, kapere, side dish among others. So for those that have not contributed to our ever changing language, my friend, check your celebrity status.

For the ladies, dressing comes coupled with the hairstyle. These people have mastered the art of hair colour and make a combination of orange, green and yellow sound like a good idea among some circles while others sneer at the very idea. And I believe that is the desired effect, they get noticed. So as one vying for a slot on the celebrity market, then, it is first the salon for say a Mohawk tinted or not or big ridiculous pumpkin shaped hair.

But hair is not one’s only accessory, the dressing too. So for those that have really hot bodies or have been told so, please go ahead and shop in the children’s section for clothes, do not burden yourself with lots of layers of cloth.  Show off the thighs and the curves as well and let the cameras flash away.

In addition, do not forget to tell people about where you buy your clothes and please do not let it be Uganda and if it is, it is strictly Sylvia Awori (p…leas..e). Do not budge even when the top you are wearing on live TV is from downtown Kampala in all possible colours; for you, shopping is in Dubai (which also has sale seasons), South-Africa, the UK and New York. And please have a trademark look, the bandana on a knee, sneakers, coloured pants; name it, it is all up to you.

Your parents christened you with names, and then there are the stage names, but these I implore you are not enough. A Ugandan Celebrity has to have titles like Extra-large, Omubanda wa Kabaka, Nanyini Figure, attached to the other name because only this will get you enemies and enemies will get you more fame.

Say if you self-proclaimed yourself ‘nalulungi’ (most beautiful), another who thinks they are more striking than you are will fight back, catch Balam’s eyes and voila, we have a concert on our hands. 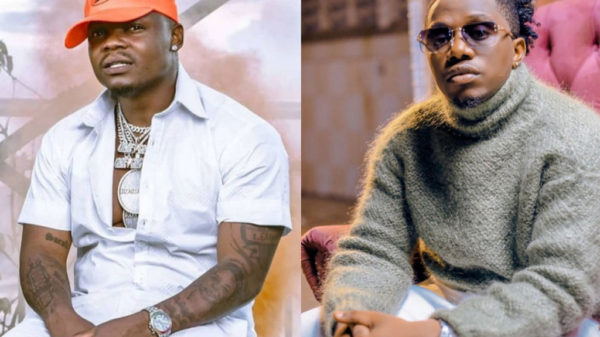 The start of the week has been entertaining for East African music fans who love violence on the social media streets. Former Wasafi co-signees...